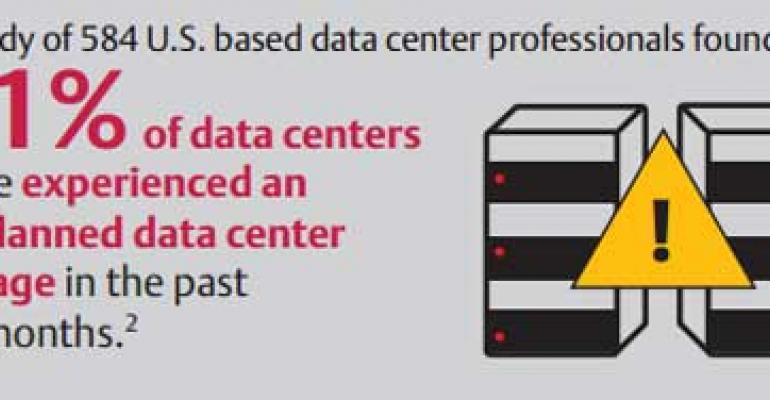 The cost of data center downtime is rising, according to a new study.
Manage>Uptime

Unplanned data center outages are expensive, and getting more costly. A new study sponsored by Emerson Network Power reveals that the cost of downtime has increased 41 percent since an original 2010 study.

The cost of data center downtime is rising, according to a new study.

Unplanned data center outages are expensive, and the cost of downtime is rising, according to a new study. The average cost per minute of unplanned downtime is now $7,900, up a staggering 41 percent from $5,600 per minute in 2010, according to a survey from the Ponemon Institute, which was sponsored by Emerson Network Power. The two organizations first partnered in 2010 to calculate costs associated with downtime.

Downtime is getting more expensive as data centers become more valuable to their operators. The increase is driven by the increased value of the business operations being supported by the data center, the survey indicated.

“Given the fact that today’s data centers support more critical, interdependent devices and IT systems than ever before, most would expect a rise in the cost of an unplanned data center outage compared to 2010," said Larry Ponemon, Ph.D., chairman and founder of the Ponemon Institute. "However, the 41 percent increase was higher than expected. This increase in cost underscores the importance for organizations to make it a priority to minimize the risk of downtime that can potentially cost thousands of dollars per minute.”

Highlights of the study include:

The study looked at 67 data centers with a minimum size of 2,500 square feet across varying industry segments.  Comprehensive analysis of direct, indirect, and opportunity costs from data center outages was performed. The study measured damage to mission-critical data, the impact of downtime on organizational productivity, damage to equipment, legal and regulatory repercussions, and lost confidence and trust among key stakeholders.

The study reveals that even more significant costs are incurred by organizations with revenue models that depend on the data center’s ability to deliver IT and networking services to customers. The highest cost of a single event in the study was more than $1.7 million. These industries saw a slight decrease compared to 2010 costs, while organizations that traditionally have been less dependent saw a significant increase.

The industries with the largest increases were:

“As data centers continue to evolve to support businesses and organizations that are becoming more social, mobile and cloud-based, there is an increasing need for a growing number of companies and organizations to make it a priority to minimize the risk of downtime and commit the necessary investment in infrastructure technology and resources,” said Peter Panfil, vice president, global power, Emerson Network Power. “This report gives these organizations the data they need to support more informed business decisions regarding the cost associated with eliminating vulnerabilities compared to the costs associated with not taking action.”

The study is available at the Emerson  Emerson web site, along with a handy infographic.