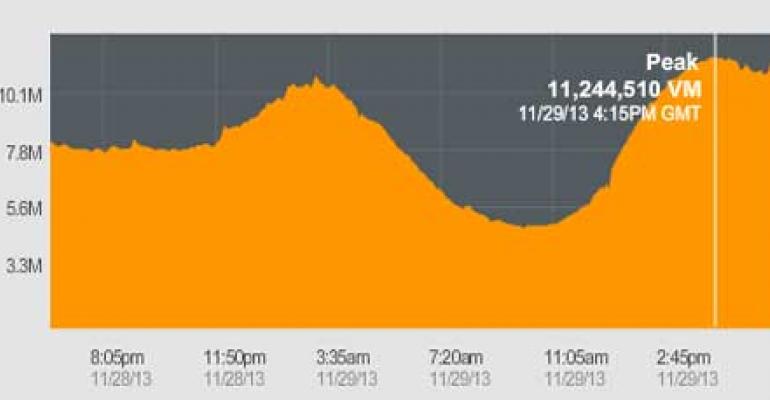 This chart from Akamai shows Internet traffic to retail sites surging on Thanksgiving evening in the US. (Image: Akamai)
Business

Online Shopping is occurring earlier and earlier, no longer confined to Black Friday and Cyber Monday. An unexpected boost in Gray Thursday traffic might have caught some retailers by surprise, affecting performance.

This chart from Akamai shows Internet traffic to retail sites surging on Thanksgiving evening in the US. (Image: Akamai)

Gray Thursday is the big trend this holiday shopping season, reflected by a large spike in traffic to online retailers on Thanksgiving Day. The surge in retail traffic  indicates that a growing number of Americans clearly want to shop on Thanksgiving. That helps explain why more retail chains have opened their doors on Thanksgiving Day, risking the scorn of some to preserve their market share in an ongoing battle between Internet stores and brick-and-mortar shops.

"Thanksgiving continues to be one of the fastest growing days for mobile commerce (m-commerce) during the holiday season," said Steve Dykstra, senior product manager for Compuware. “While we’re seeing some pages optimized for mobile, some critical pages are overloaded, have too many roundtrips making them slow on mobile devices.”

The continued growth of shopping through mobile devices. Nearly half (49 percent) of smartphone and tablet users intend to use these devices to search for and buy gifts this year, according to a Harris Interactive poll. Keynote saw a 20 percent increase in mobile shopping last year, and will provide growth numbers after Cyber Monday.

Shopping started even earlier than Gray Thursday. Compuware APM noted a significant increase in shopping traffic during the weekend leading up to Thanksgiving as well.

These are valuable seconds. According to Compuware, with the average page load time (response time) over 6 seconds, the page abandonment rate increased from 12 percent to over 20 percent. According to a Harris Poll, 37 percent of consumers will go to a competitor if the response time is more than 3 seconds.

Companies such as Compuware APM and Keynote will continue to monitor both the Internet and the health of the major shopping sites during this busy period, providing intermittent reports. Good performance from data center to end device for both native and mobile shopping sites is key to success for online retailers, as every second counts.

Data Center Knowledge will keep track of all the action, delving into the impact of both Gray Thursday and the increasing usage of mobile devices. Last year, the big issue identified during the holiday shopping season was "time to paint" on mobile devices, with slow load times causing many to abandon sites and their shopping carts. So far, performance on Thanksgiving day seems to have taken a step back. Now it's time to see if the retailers that struggled during last Black Friday did some fine tuning this year.