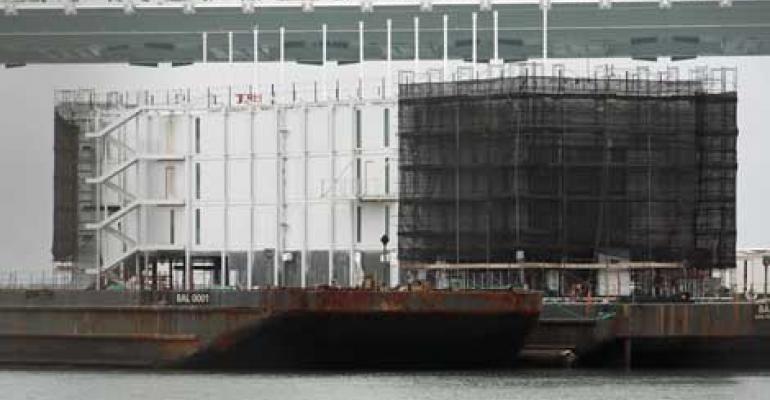 The structure on a ship off of Treasure Island. (Photo: Jordan Novet)
Design

Closer Look: The Mysterious Barge in the Bay

It's hard to say for sure just what's being built on a barge docked at Treasure Island, in the middle of San Francisco Bay. A data center by infrastructure innovator Google is one of the possibilities. Our photo feature provides a closer look at the mysterious facility.

SAN FRANCISCO - It's hard to say for sure just what's being built on a barge docked at Treasure Island, in the middle of San Francisco Bay. Judging by the looks of it, though, a data center by infrastructure innovator Google is one of the possibilities.

CNET reported Friday on the signs pointing to Google's involvement in the project, and speculating that it was a floating data center. On Sunday CNET acknowledged a report from local television station KPIX 5 indicating that the structure could actually be "a floating marketing center" for Google Glass.

Google itself hasn't admitted any involvement with the project or announced the true purpose of the structure, leaving open the possibility that the company is following through with the construction of a "water-based data center." Google has been awarded a patent for the design of a data ship that uses sea water for cooling and generates electricity with the the motion of waves.

The facility on the barge at Treasure Island has some unusual characteristics. For starters, 12 vertical poles rise above the top of  the unit. (Don't be distracted by the seagull perched on the third one from the left.)

The unusual structure being built on a ship docked  off of Treasure Island in San Francisco. (Photo: Jordan Novet)

The long sides of the structure, which expose what seem to be several modules, let light shine in through narrow windows, which could represent corridors within the structure. Meanwhile, the end of the structure facing the island contains multiple large window panels spanning two stories. 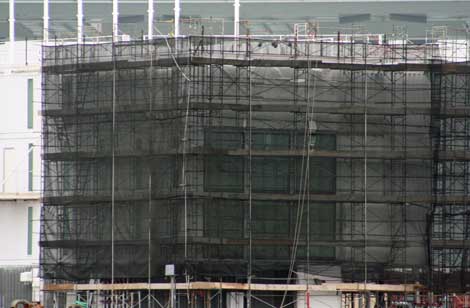 The purpose of the flagpole-like assemblies atop the structure are unclear. Rod-like columns along the side structure are topped off with shiny silver-colored cones. 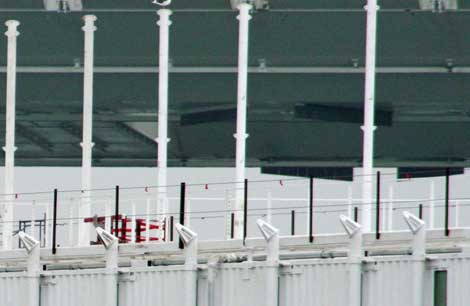 Cones cap the rods on the long sides of the structure. (Photo: Jordan Novet)

Silver-colored curved pipes jut out from the top of the side of the structure facing the island. 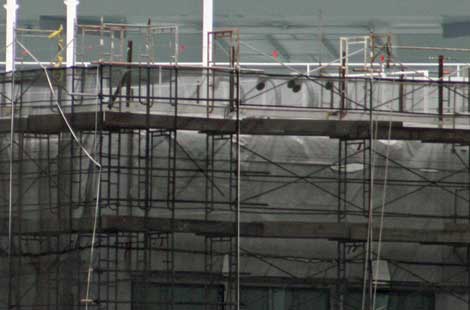 Curved pipes can be seen on the side of the structure facing the island. (Photo: Jordan Novet)

The seeming scarcity of vents and louvers is worth noting as well. One is visible on a top-level module on the long side of the structure, while another is on the bottom, facing the island. 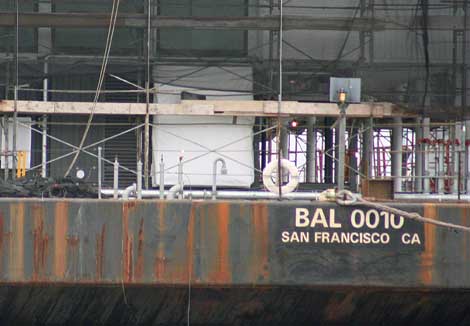 A vent on the side of the structure facing Treasure Island. (Photo: Jordan Novet)

A security guard in a booth prevented closer access to the dock and the ship holding the structure. 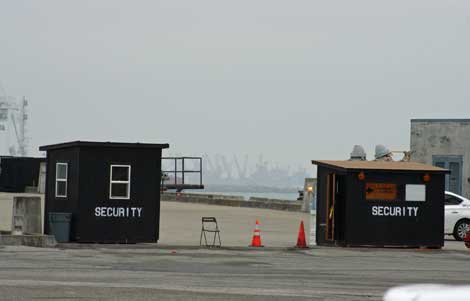 Google already makes good use of wastewater, seawater and rainwater runoff at data centers, and it has been willing to spend more than $23 billion on infrastructure. Now it would be nice to know for sure that Google is taking more advantage of water for its ever-growing footprint, perhaps generating energy with it.