Risky Business: When Disaster Strikes With No Recovery Plan

With experts estimating the average cost of downtime at $5,000 per minute, many organizations are at significant risk when it comes to the reliability of their data environments. WAN Virtualization can be deployed to prevent disasters from affecting business continuity and speed recovery, writes Donna Johnson of Talari Networks.

According to a recent survey by the Disaster Recovery Preparedness Council (DRP), "Seventy-two percent of survey participants, or nearly three out of four companies worldwide, are failing in terms of disaster readiness scoring ratings of either a D or F grade. Only 28 percent scored an A, B or C passing grade with the remaining 72 percent of respondents at risk."

With experts estimating the average cost of downtime at $5,000 per minute, many organizations are at significant risk when it comes to the reliability of their data environments.

Preparing for a Disaster

A key part of almost every disaster recovery plan is backups. WAN Virtualization speeds data backup through its ability to simultaneously use all bandwidth in an aggregated WAN for a single session. This removes the bandwidth restriction in any one link and sends data in parallel through multiple links, increasing throughput rates. WAN Virtualization also ensures backup processes have enough bandwidth to perform successfully because a minimum amount of bandwidth can be reserved for the backup process, preventing other, lower priority, processes from crowding out backups.

While true natural disasters are rare, network outages are not. According to the DRP study, 54 percent of disasters are caused by software or network failure. Handling these failures without downtime or application outage is key to a business' DR (Disaster Recovery) strategy. WAN Virtualization detects network outages within a split second and takes action to switch traffic to alternate lines and along alternate routes, preventing network outages from becoming a disaster.

Recovering From a Disaster 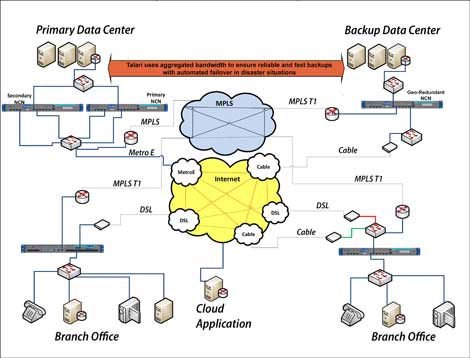 Companies of all sizes, varying industries and geographic locations are using WAN Virtualization as part of their DR strategies. Although none of these companies have anything in common, the one thing they do share is the need for 24/7 network resiliency and uninterrupted business continuity. Here are some examples:

By using WAN Virtualization technology as a key part of any DR strategy, network operators can ensure a more resilient network topology and make it much less likely for a single link failure, link congestion, or even a complete data center shut down to become a catastrophic disaster.