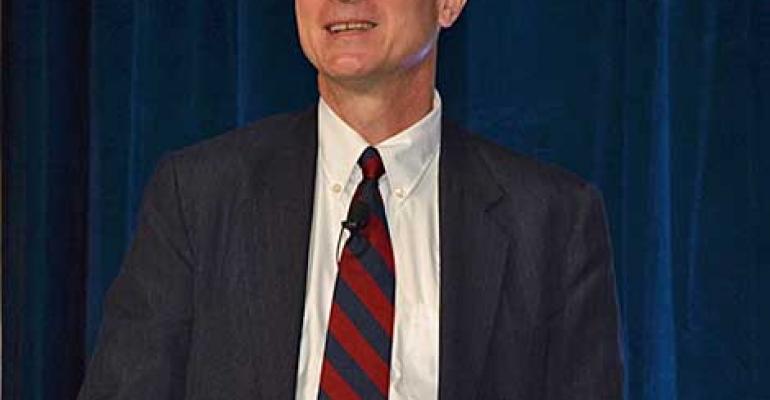 Tom Popik, chairman and co-founder, Foundation for Resilient Societies, on wide-area threats and common mode failures for data centers, at the opening session of Data Center World Fall 2013 in Orlando. He noted that long-term electric outages impact every other critical infrastructure, and a 500-mile distance between your data centers may not be enough distance to fail over in the case of electrical grid outages. (Photo by Colleen Miller)
Design>Power and Cooling

Is The Power Grid Ready for Worst-Case Scenarios?

Is America ready for a sudden loss of electric power over large portions of North America? The opening panel of the Data Center World conference examined the risks posed by an aging grid, solar geomagnetic storms, and electromagnetic pulses. 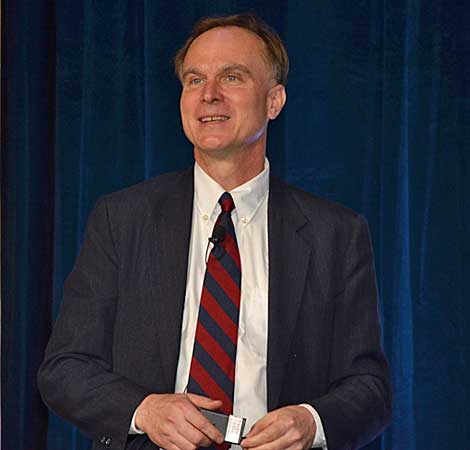 Tom Popik, chairman and co-founder, Foundation for Resilient Societies, on wide-area threats and common mode failures for data centers, at the opening session of Data Center World Fall 2013 in Orlando. He noted that long-term electric outages impact every other critical infrastructure, and a 500-mile distance between your data centers may not be enough distance to fail over in the case of electrical grid outages. (Photo by Colleen Miller)

ORLANDO, Fla. - Is America ready for a sudden loss of electric power over large portions of the country? How likely are these Doomsday scenarios? And how can the data center industry prepare for the worst-case impacts on power grids?

Those questions were explored Sunday in the opening panel of the Data Center World Fall conference, as three experts outlined the threats the U.S. electrical infrastructure may face from seemingly unlikely events - a massive burst of solar weather, terrorist attacks on critical transformers, and radio frequency weapons with the potential to wipe out all the data housed in a server farm.

While these events may seem like the stuff of science fiction, they are more likely than you may suspect, the panel told its audience. For an industry that must account for any and all threats to uptime, these "wide area threats" are tricky because they may seem like a low probability, but carry such a high impact.

A terrorist attack or major geomagnetic storm could knock out power over large area of North America for weeks or event months, warned Tom Popik, founder of the Foundation for Resilient Societies, which works to raise awareness of threats to the power grid.

"Electric power is the glue that holds the infrastructure together," said Popik, noting that many other critical infrastructure systems need power to function. "A long-term power outage will affect all types of infrastructure."

Popik and his fellow panelists urged data center managers to engage with public utilities and elected officials  to make them aware of threats to the U.S. power grid and develop plans to address some of these worst-case scenarios.

Popik said one of the challenges is the interdependency of the North American electrical grid, which makes it difficult to isolate some types of failures. Incidents that affect large portions of the grid are hard to contain and create worrisome recovery scenarios, Popik said.

He said a particular vulnerability is the replacement of some types of equipment, especially Large Power Transformers (LPTs), which are custom-designed, expensive to replace and hard to transport. LPTs weight between 100 and 400 tons, cost millions of dollars and and can take as long as 20 months to manufacture, according the U.S. Energy Department, which addressed the risks of LPT shortages in a 2012 report (PDF).

"Most utilities have few spare transformers," said Popik, who warned that an incident that damaged multiple large power transformers could cause lengthy problems to the power grid while the units were repaired or replaced.

Popik said a potential shortage of LPTs is an internal weakness of the grid. Other speakers on the panel warned of external threats.

The potential for power outages from solar weather has been discussed by the data center industry in recent years. But John Kappenman of Storm Analysis Consultants, said the threat from geomagnetic storms is not well understood.

"We're looking at impacts that could be measured in trillions of dollars of damages," warned Kappenman. "The country's ability to respond to this and recover is very limited. it is arguably one of the worst natural disasters we could have. We have never had a design code that takes this threat into consideration.

"How probable is this? It's 100 percent probable," said Kappenman. "They've happened here before, and will happen again. They're not very frequent. We are playing a game of Russian Roulette with this problem."

Kappenman cites the impact of a 1989 event in which a geomagnetic storm brought down the power grid for the province of Quebec, leaving 6 million customers in the dark. Kappenman insists it could have been worse.

"We came very close to a blackout that could have extended from the Northeast coast to the Pacific northwest," he said it. "The North American continent had a near miss."

Kappenman has advised the President’s Commission on Critical Infrastructure Protection on the risks from geomagnetic storms, and has testified before Congress on the issue.

The disastrous scenarios Kappenman describes are based on events much larger than the 1989 incident. Solar storms occur in 11-year cycles, but they're not easy to predict. A story this week in the New York Times noted that although this year represents the peak of the solar activity, no major events have been seen.

“The truth of it is there isn’t a lot going on,” Joseph Kunches, a space scientist at the Space Weather Prediction Center, told The Times. “It’s been a bit of a dud."

The U.S. power grid also faces a range of risks associated with electro magnetic pulses (EMPs) and radio frequency weapons (RFWs) that use intense pulses of RF energy to destroy electronics, according to George Baker, professor emeritus at James Madison University and a veteran of the Defense Nuclear Agency.

The most dramatic risk is presented by a nuclear EMP, in which a nuclear device is detonated high in the atmosphere above North America. Such an attack could have a profound impact on power infrastructure.

"The big characteristic of (nuclear) EMP for electrical grids and data centers is the is the wide affected region," said Baker. "This is where you worry about the whole North American grid coming down."

Perhaps a more likely scenario is the use of a RF weapon on a data center. Baker cited an incident in the Netherlands in which a disgruntled former employee used a small RF weapon to damage data in a bank's data center. Baker says working RF weapons have been created that can fit in everything from a briefcase to a truck.

The good news? It's a threat you can defend against. "The protection is very straightforward," said Baker. "The Department of Defense has been doing it since the 1960s. We know from the DoD that the protection is affordable."

Popik, Baker and Kappenman all urged data center professionals to learn more about these issues and press for action from utilities and the government to investigate sensible defensive measures. Politicians may find the potential risks alarming, but that doesnlt always lead to action.

"It's easy to become distracted about things that may not have happened yet," said Popik.