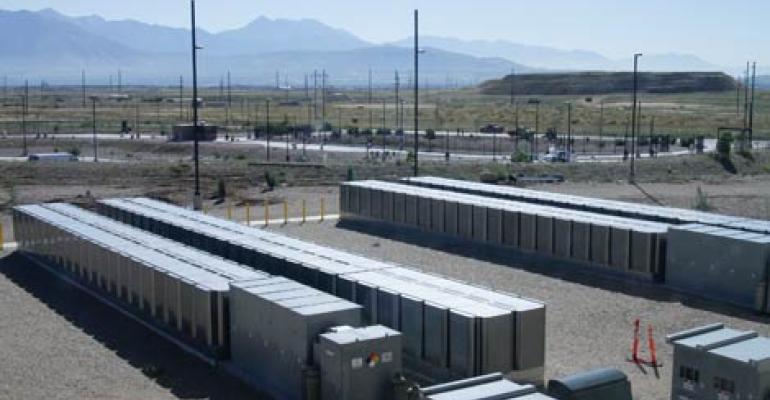 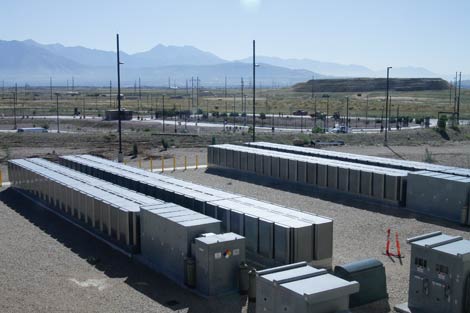 "This is the first step on a dramatic journey that will totally change this industry," said Peter Gross, Vice President of Mission Critical Systems at Bloom Energy. "It's a matter of vision and taking a leap of faith, and that's what eBay has done today. What eBay has done is truly revolutionary and will have a huge impact on how data centers are built."

The Utah facility is using 30 Bloom Energy Servers as the primary power source for its entire IT load, using the utility grid for backup power should the Bloom units fail. The Bloom uses solid oxide fuel cell technology that converts fuel to electricity through an electro-chemical reaction, without any combustion. Until now, data centers using Bloom boxes (like Apple) have used them for supplemental energy while retaining traditional UPS units and generators for emergency power.

Last June eBay's Dean Nelson announced plans to implement a "Bloom first" approach in Utah, and today eBay flipped the switch to go live. Nelson said the new design is not only more sustainable and efficient, but also more reliable.

"The Bloom fuel cells are expected to not only increase our efficiency and lessen our environmental impact (approximately 49 percent less CO2 emissions than our first-phase data center), but also boost the performance of our commerce platforms by reducing the risk of outages," said Nelson, the Vice President of Global Foundation Services for eBay. "In this way, we’re seeing proof that environmental considerations go hand-in-hand with good business strategy."

The new data center in South Jordan, Utah also features advances in the use of data center modules to deploy high-density servers. Dell says it collaborated with eBay on a new EPIC module that the companies say is the world's densest modular design. The EPIC module packs more than 1 megawatt of IT power capacity into 24 racks for a density of nearly 50kW per rack while using just fresh air and evaporative cooling. Here's a look: 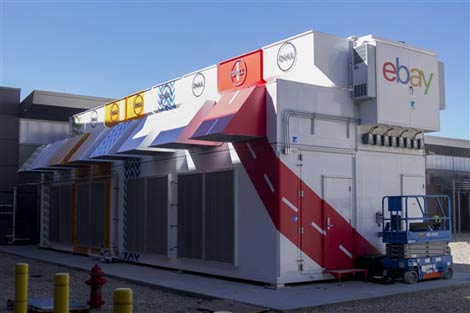 The Dell EPIC modular data center has gone live at the eBay data center in Utah. The unit houses 1 megawatt of IT gear in 24 racks. (Photo: eBay)

Meanwhile, HP says a new EcoPod module developed with eBay is the largest single-module deployment ever, with 44 racks of gear offering 1.4 megawatts of power capacity.  The EcoPod offers additional capacity by using a "double-wide" design that joins two 40-foot containers, and can use outside air in its cooling system. Here's a closer look at the EcoPod: 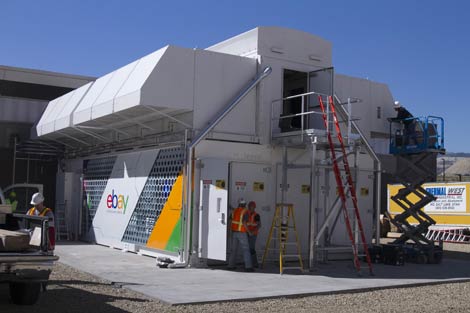 In a period when hyperscale computing peers like Facebook and Google are designing their own servers or partnering with original design manufacturers (ODMs), eBay has chosen to deepen its relationship its existing server vendors.

"What we've found is that working on custom hardware with Dell and HP really fine-tunes our infrastructure," said Nelson. "We may have different paths in going to an OEM versus an ODM. But we have the same destination.

"Dell and HP are extreme partners for us," said Nelson. They're an extension of our engineering team."

eBay also announced an agreement with renewable energy provider Ormat to develop an off-site waste heat recovery solution. The companies will collaborate on a new facility that will capture and convert heat from the natural gas pipeline feeding the Bloom fuel cells. Nelson says the plant, which will take up to 18 months to build, will eventually provide up to 5 megawatts of electricity.

eBay has 13 data centers around the globe, including four in Phoenix, two in Utah and two in Las Vegas, where the auction house colocates servers at two of the Switch SuperNAPs. eBay runs 52,500 servers that use 31.2 megawatts of IT load, with a Power Usage Effectiveness (PUE) of 1.5 for the total footprint - down from 2.0 in 2008.