In recent weeks Microsoft has leased a large chunk of data center space in Silicon Valley, as well as additional space in northern Virginia. The latest leases continue a massive expansion of Microsoft's Internet infrastructure to support growth in its Azure cloud services and Xbox Live gaming service. 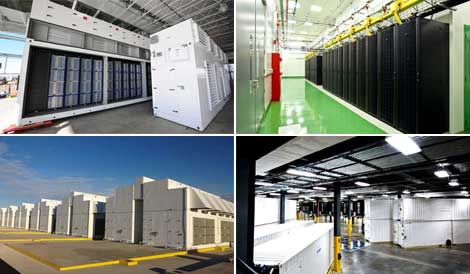 Microsoft is accelerating a global expansion of its data center infrastructure to support growth in its Azure cloud services and Xbox Live gaming service. At a time when many cloud builders are debating whether to build or buy their data center space, Microsoft is doing both.

Microsoft has long been one of the Internet's master builders, investing $15 billion in data centers that now house more than 1 million servers. It has construction projects underway in at least five locations across the globe, from Singapore to Des Moines. And now Microsoft has also become the biggest customer in the market for turn-key "wholesale" data centers.

In recent weeks Microsoft has leased large chunks of server space in data centers  in Silicon Valley and northern Virginia, two key hubs for Internet traffic. The latest leases, which total about 9.4 megawatts of critical power, establish Microsoft as the biggest fish in the market for super wholesale tenants: cloud builders who can lease vast chunks of server space. This group of companies - which also includes Facebook, Apple and Rackspace – can use their scale as leverage in pricing, and sometimes get discounts by working deals for space in multiple markets.

Lease Deals on Both Coasts

That appears to be what Microsoft did last month, when it lined up large leases with data center developer DuPont Fabros Technology (DFT) in Santa Clara, Calif. and Reston, Virginia. DFT doesn't identify its tenants, but said recently that a Fortune 50 customer had leased 6.83 megawatts of space in Santa Clara, Calif. and another 2.6 megawatts of power in Reston, Virginia. An analysis of DFT's leasing and known customer base makes it clear that the tenant is Microsoft.

Microsoft wouldn't comment on its latest leasing activity, other than to confirm that it uses both leased and company-owned data centers.

In 2012 Microsoft added more wholesale space than any other company, according to a report from realty firm Avison Young, leasing 12 megawatts of space from DuPont Fabros across facilities in Santa Clara, Chicago and Virginia. Add in the new deals, and Microsoft has leased more than 21 megawatts of wholesale space in the last 15 months.

Meanwhile, the company continues to build its own data centers in Singapore and four markets in the United States - Quincy, Washington; Boydton, Virginia; West Des Moines, Iowa; and Cheyenne, Wyoming. This week Microsoft said it would also invest $250 million to build a new data center in Finland.

What's behind all this data center expansion? One factor, Microsoft says, is the steady growth of its Windows Azure cloud computing platform. There's also a major upgrade of the company's Xbox Live infrastructure to support the launch of Microsoft's new Xbox One on Nov. 22.

"Today, 15,000 servers power the modern Xbox Live experience," Microsoft’s Marc Whitten said in introducing the new platform in May. "But this year, we will have more than 300,000 servers for Xbox One.”

That's a lot of servers. Microsoft hasn't said whether that means physical servers or virtual servers (VMs). But even 300,000 virtual servers would require significant additional infrastructure.

Both Building and Buying

As it seeks to expand its infrastructure to support those workloads, Microsoft is pursuing a hybrid strategy in which it builds state-of-the-art data centers in areas where land and power are cheap, and leases third-party wholesale space in key markets where it is expensive to build and operate large server farms.

Company-built facilities offer economies of scale and can be customized with efficient designs that offer savings on power bills. In the wholesale data center model, a tenant leases a dedicated, fully-built data center space. This approach offers faster deployment of new capacity, and the ability to manage capital spends in regions where economics for hyperscale facilities are less attractive.

"When choosing future data center sites, we take into account over 35 weighted criteria including close proximity to customers, an ample and reliable power source and fiber optic networks, a large pool of skilled labor, and affordable energy rates to determine the long-term viability of each site," said Tim McDowd, a spokesman for Microsoft Global Foundation Services, which builds the company's data centers.

There's also a two-pronged approach to deployment models. In its company-built data centers, Microsoft is deploying IT capacity in factory-built data center modules that can operate outdoors with limited generator support. In its leased facilities, Microsoft will likely deploy servers in traditional racks and containment systems.