On Wednesday Google announced numerous enhancements to its Cloud Platform, the addition of layer 3 load balancing to Compute Engine, which delivers Google-scale throughput and fault tolerance to manage Internet applications. 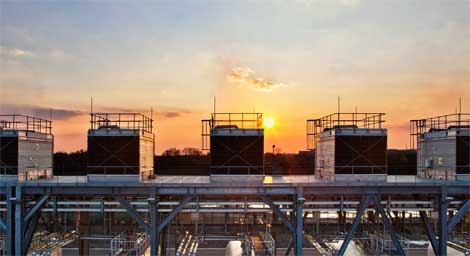 View of sunset and clouds over the exterior of the cooling towers at a Google data center.(Photo: Google)

Backed by a sprawling, massive global data center footprint and a strong developer ecosystem, Google's cloud presence is an imposing force. Last year Google (GOOG) challenged cloud competitors with the Google Compute Engine (GCE) - acting as its Infrastructure as a Service offering to enable spinning up virtual machines hosted in Google data center.  On Wednesday Google announced numerous enhancements to its Cloud Platform , that go beyond those mentioned at its May I/O conference.

Most notable is the addition of layer 3 load balancing to Compute Engine, which delivers Google-scale throughput and fault tolerance to manage Internet applications. Load balancing over a specific set of Compute Engine virtual machines within the same region can benefit from HTTP-based health checks, to ensure that only healthy VMs are used to serve Internet requests. This feature can be configured through a command line interface or programmable RESTful API.  In typical Google beta fashion, the initial release of load balancing is provided at no cost through end of 2013, at which point Google will charge specified rates.

Other new features continue the theme of appealing to the developer experience, in the Google Cloud Datastore. Google Query Language (GQL) support was added for a SQL-like language for retrieving entities or keys from Cloud Datastore. Users can now access Metadata Queries that allow retrieval of statistics on underlying data. Local SDK improvements include support for Windows and a number of enhancements to the command line tool. The Ruby language is now supported in Cloud Datastore as well, giving easy spin up of Ruby applications that rely on a managed NoSQL datastore.

An App Engine updates 1.8.3 focuses on PHP. Updates include improved support for working with directories in Google Cloud Storage, the ability to write metadata to Cloud Storage files, and substantial performance improvements through memcache-backed optimistic read caching. It also improved support for task queues, including the ability to set headers on push tasks and to add tasks to queues efficiently in bulk.