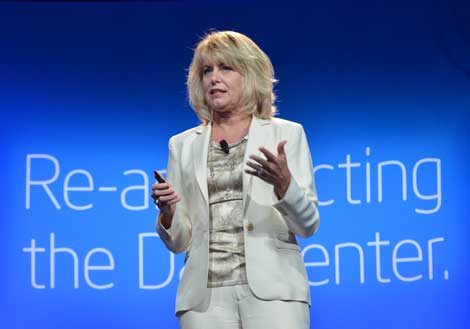 Diane Bryant, senior vice president and general manager of the Datacenter and Connected Systems Group at Intel, discusses the company's vision for the data center at an event Monday. (Photo: Intel)

Intel (INTC) has set out to re-architect the data center, hoping to help data center operators keep pace with the massive growth of information technology and services. During a media event this week Diane Bryant, senior vice president and general manager of the Datacenter and Connected Systems Group at Intel, set the stage for Intel's approach to re-architect the data center and journey through periods of transformation that are changing from network-centric to human-centric models. New Atom and Xeon processor announcements were also made.

"Data centers are entering a new era of rapid service delivery," said Bryant. "Across network, storage and servers we continue to see significant opportunities for growth. In many cases, it requires a new approach to deliver the scale and efficiency required, and today we are unveiling the near and long-term actions to enable this transformation."

As a part of its software defined infrastructure strategy, Intel revealed new details for the forthcoming Intel Atom processor C2000 family, aimed for low-energy, high-density micro servers and storage (code named Avoton) and network devices (code named Rangeley). The 64-bit System on Chip (SoC) is the second generation of Atom processors and will feature up to eight cores with integrated Ethernet and support for up to 64GB of memory. The expected energy efficiency is up to four times that of the first generation of the Atom, with up to 7 times the performance. These chips are based on the Silvermont microarchitecture, announced in May. Intel has been sampling these processors to select partners since April and general availability is expected later this year.

With one family of processors announced, Intel follows its tick tock cadence of innovation and unveils the next processor generation. Third generation Atom processors will be based on Intel's forthcoming 14nm process technology and are scheduled for 2014. The Atom SoC, code named Denverton, will enable even higher density deployments. The 2014 Xeon E3 family SoC processor is code named Broadwell, and will also be 14nm. It will be built for processor and graphic-centric workloads such as online gaming and media transcoding.

To empower data centers to become more agile and service-driven Intel addresses technology challenges with customized solutions for an ever-expanding set of diverse workloads that place varying degrees of demand on cpu, memory and i/o. The foundation of Intel's software defined infrastructure will take on severs, storage and networking to help take data centers from static to dynamic, and manual to automated. Acting as the catalyst for these bold transformations, Intel hopes to drive both traditional product lines and explore as many customization opportunities as possible.

With a vast ecosystem of technology partners, Intel has a growing set of solutions, to match a spectrum of workloads in information technology. The first generation of Atom processors had 20 designs, and the new Atom C2000 family has over 50. Additional architected solutions Intel cited came from customized silicon for eBay and Facebook, Accelerators for F5, Vantrix and QuickFire networks, and extreme low power solutions for OVH and Savvis.

With the recently elected Brian Krzanich as CEO coming from Intel's technology and manufacturing group and the company continuing to invest billions in silicon manufacturing, Intel has a clear advantage in benefiting from silicon customization opportunities.