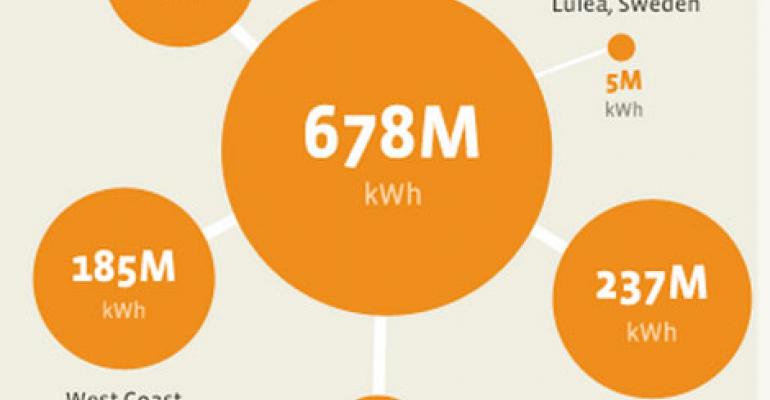 Facebook's data center energy use grew 33 percent in 2012, as the company installed tens of thousands of servers in its new company-built data centers. The company's latest sustainability report documents the company's move to reduce its computing footprint in Silicon Valley, even as it boosts its reliance on leased space in northern Virginia. 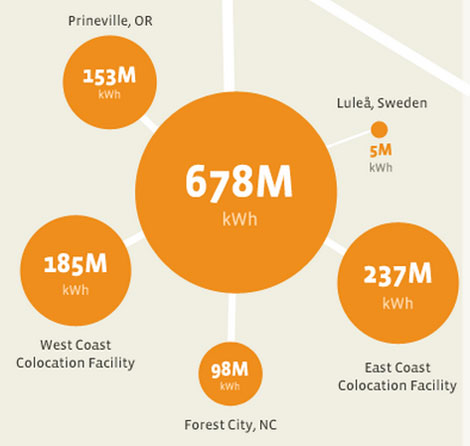 A breakdown of power usage at Facebook's data centers during 2012, from the company's annual sustainability report.

Facebook's data center energy use grew 33 percent in 2012, as the company installed tens of thousands of servers in its new company-built data centers. The growth of the company's power usage is disclosed in the company's latest sustainability report, which also documents the company's move to reduce its computing footprint in Silicon Valley, even as it boosts its reliance on leased space in northern Virginia.

The surge in Facebook's energy usage was expected, as the company has been massively scaling up its data center infrastructure to keep pace with growth in its audience, which now includes more than 1 billion monthly users.

Facebook's server farms used 678 million kilowatt hours (kWh) of electricity in 2012, up from 509 million kWh in 2011, the company said. That reflects major expansions of its company-built data center campuses in Prineville, Oregon and Forest City, North Carolina. Facebook has invested hundreds of millions of dollars in its ultra-efficient facilities in both sites, which can slash the energy bill for its vast armada of servers. Facebook's company-built data centers have an average Power Usage Efficiency (PUE) of 1.08, among the best marks on the widely-used metric for "green" operations.

The report confirmed that Facebook has been reducing its server footprint in Silicon Valley, where its power usage declined 18 percent during 2012, dropping from 227 million kWh to 185 million kWh.  That reduction, which we noted last month, has left the company with surplus data center space, which it is now seeking to sublease to third parties.

Things are different on the East Coast, where Facebook leases wholesale space from multiple providers in Ashburn, Virginia. Facebook's energy footprint in its Ashburn data centers grew 15 percent last year, from 205 million kWh to 237 million kWh. Updated tax incentives in Virginia are one reason. Facebook says its investments in Virginia"could reach hundreds of millions of dollars" in coming years.

Here are some other data points on Facebook's data center energy use from its sustainability report:

The report also provided some data relevant to the headline-making scuffle in which the environmental group Greenpeace criticized Facebook for building its data centers in areas that relied on coal for much of the local energy mix. The groups have since announced a truce, with Facebook adopting a new siting policy reflected in its hydro-powered data center in Lulea, Sweden.

Why did Facebook's data center carbon footprint grow faster than its data center energy use? There are a number of factors that may contribute to this. One is the growth of the new server farm in Prineville, Oregon. As has been highlighted by Greenpeace, the Prineville facility initially used energy sourced predominantly from coal. As a result, it has a larger carbon impact than other parts of Facebook's infrastructure.

Although the sustainability report presents an interesting snapshot of Facebook's infrastructure, the data is now six months old and Facebook has been busy building in all four of its company-operated campuses - including Lulea, which will improve the company's carbon-intensity going forward.