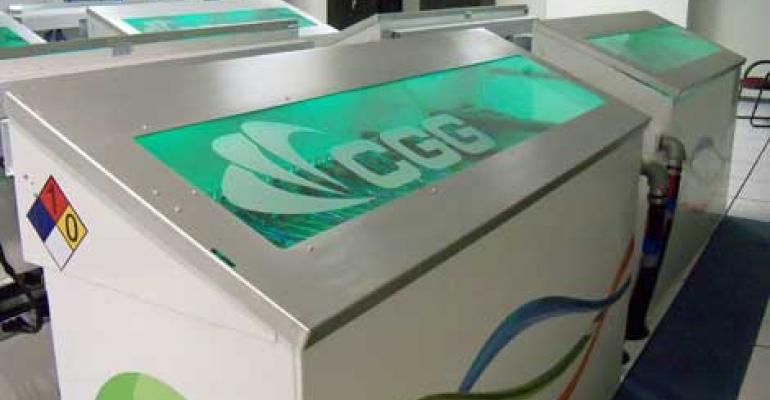 The Immersion Data Center: The New Frontier of High-Density Computing

Geoscience specialist CGG has filled an entire data center with tanks of servers submerged in a liquid coolant similar to mineral oil. Here's a look at this unique data center in Houston and its implementation of immersion cooling technology from Green Revolution Cooling. 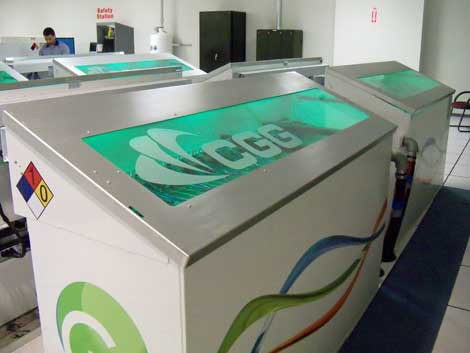 These tanks in the CGG data center in Houston are filled with 42 servers submerged in a liquid coolant, similar to mineral oil, developed by Green Revolution Cooling. (Photo: Rich Miller)

HOUSTON - As you enter the data center at CGG, the first thing you notice is what’s missing – the noise and the breeze. Instead of rows of air-cooled black cabinets, the room is filled with tanks of liquid coolant, each containing up to 42 servers.

This is the new frontier of immersion cooling, with servers submerged in a liquid similar to mineral oil. It’s also what a growing number of data centers may look like in coming years.

The explosion of data we generate every day is creating a need for industrial strength data crunching. That’s the specialty of CGG, which provides high-end geological and geophysical analysis to its customers, who are primarily from the oil and gas industry. One areas of its expertise involves using powerful computers to sort through mountains of seismic data to produce images of the earth's geology to help identify the best places to find new sources of energy.

CGG's Houston data center is one of several hubs in its global network of 43 subsurface imaging centers. The company has shifted an entire data hall to an immersion cooling technology developed by Green Revolution Cooling (GRC). Instead of cool air flowing through a standing cabinet, the GRC system effectively tips the cooling paradigm on its back, with a liquid coolant flowing across servers housed in a tank.

Since its launch in 2009, Green Revolution has seen its technology used in facilities from an Austin hosting company, several universities, telecom firms and ultra-scale cloud providers. CGG has been the first company to deploy the GRC system at scale, with dozens of tanks in a single facility, providing its large-scale data processing infrastructure with new levels of energy savings, efficiency and performance.

In this video, the IT team at CGG takes us inside their data center to provide a detailed look at their unique data center and its use of immersion cooling.

Will the appetite for ever-more powerful computing clusters push more users to adopt immersion cooling technologies? Intel recently concluded a year-long test with GRC technology and affirmed that its immersion cooling is highly efficient and safe for servers. The giant chipmaker says it will explore the development of reference designs and custom motherboards optimized for immersion cooling.

Intel’s research lays the groundwork for end users or server OEMs to deploy oil-based cooling technologies on a broader basis. But a key first step is to see the technology working at scale in a live production data center. CGG’s data center provides a window into that experience – and perhaps, the future of high performance computing.