The second quarter of 2013 was a rough ride for the data center industry, as several of the sector's bellwethers experienced selloffs and wound up lagging the market.

The second quarter of 2013 was a rough ride for the data center industry, as several of the sector's bellwethers experienced selloffs and wound up lagging the broader market. The exception was content delivery providers, as Akamai Technologies (AKAM) and Limelight Networks (LLNW) bounced back after several years of rocky performance. Akamai shares rose 20.5 percent in the quarter ending June 30, while Limelight rose about 9 percent.

Here's a look at our Data Center Investor performance chart for the second quarter of 2013: 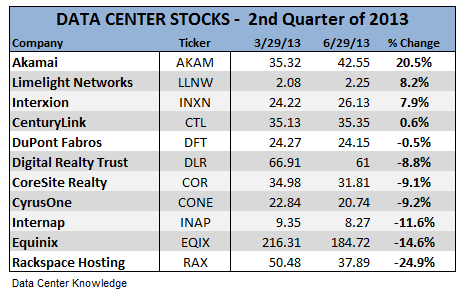 It was a another rough quarter for Rackspace Hosting (RAX), which saw a sharp selloff after its announced earnings that fell short of the expectations set by Wall Street analysts. It was the second consecutive earnings disappointment for Rackspace, which said the rate of growth for its cloud computing business has moderated.

Shares of colocation market leader Equinix (EQIX) took a hit in early June after the Internal Revenue Service (IRS) said it would review its guidelines for real estate investment trusts (REITs). The agency has formed an internal working group to define its standards for REIT status, and will not approve any new applications for REIT status until the process is completed. Equinix, which has announced plans to convert to REIT status, said it believes data center companies are appropriate for REIT status.

The largest data center REIT, Digital Realty Trust (DLR), made investment headlines when a hedge fund announced that it was shorting the company's shares, asserting that Digital Realty had not accounted for the full cost of future maintenance and upkeep of existing data centers. Jonathon Jacobson of Highfields Capital Management asserted that Digital Realty should be valued at $18 per share. Shares of Digital declined 8.8 percent for the quarter, but with DLR at $61 a share it seems safe to conclude that the market has rejected Highfields' valuation of the stock.

For the second quarter, the Dow Jones Indsutrials rose 2.3 percent, the S&P 500 gained 2.4 percent and the Nasdaq Composite climbed 4.2 percent.