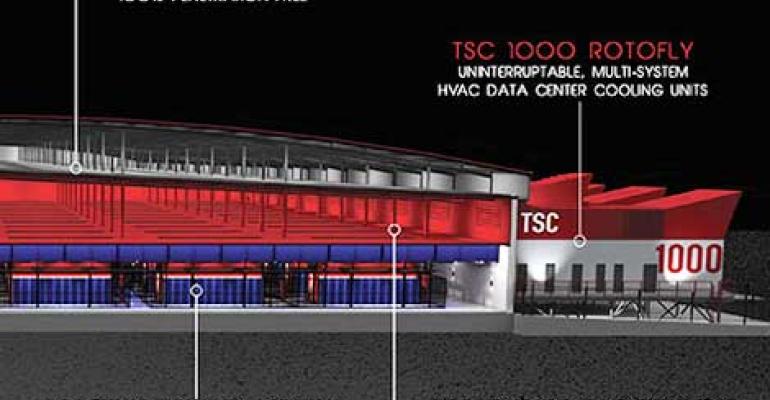 Colocation provider Switch says design innovations at its SuperNAP 8 data center will enable "unparalleled capacity and density levels" and make the new facility one of the most advanced data centers in the world. 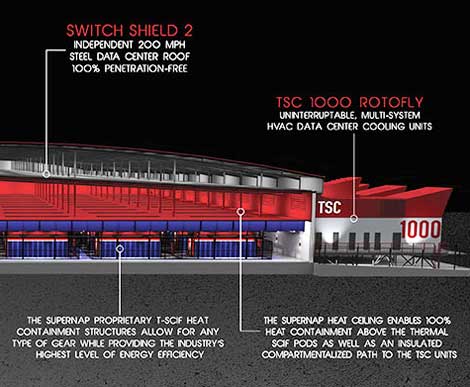 A cross section of the new SuperNAP 8 in Las Vegas, describing several of the facility's design innovations. Click the image to see a larger version. (Image: Switch)

The new SuperNAP is here. And like the original SuperNAP, a huge Las Vegas data center that debuted in 2009, the new SuperNAP 8 includes a number of design innovations. These include a double-reinforced roof, an updated rack containment system that incorporates thermal storage, and a refinement to its custom cooling units to add an on-board backup power system.

Switch, the Las Vegas colocation provider that has developed the SuperNAPs, says the new design elements will enable "unparalleled capacity and density levels" and make SuperNAP 8 one of the most advanced data centers in the world.

“It is our mission at Switch to solve problems, develop smart systems and think beyond tomorrow for the benefit of our clients, and SuperNAP 8 is a direct result of this mission,” said Rob Roy, the CEO and founder of Switch.

SuperNAP 8 is part of a multi-phase expansion announced by Switch in 2011, which will include at least one more data center on its current Las Vegas campus. The company says the new facility provides capacity for Switch to house up to 20,000 cabinets on its campus, with capacity of up to 200 megawatts of power. The company has also announced plans to develop a campus in North Las Vegas.

Switch hosts more than 600 customers in its seven data centers in Las Vegas, including the 400,000 square foot SuperNAP, now known as SuperNAP 7.

Switch has created its own custom infrastructure, designed and patented by Roy, which includes a high-density airflow containment system known as T-SCIF and  custom cooling units which can switch between four different types of cooling based on outside conditions. SuperNAP 8 introduces new features on both these components, building in additional protection for customer equipment in the event of a power failure or a major storm.

These new features add an additional comfort level for customers running high-density server installations at the SuperNAP. Switch  will provide additional information about SuperNAP 8 next week, when an official announcement of its opening is likely.