Mutual fund giant Fidelity Investments is commercializing an in-house factory-built data center product called Centercore. The company is using the design to build out its own infrastructure, including portions of its new data center project in Nebraska. 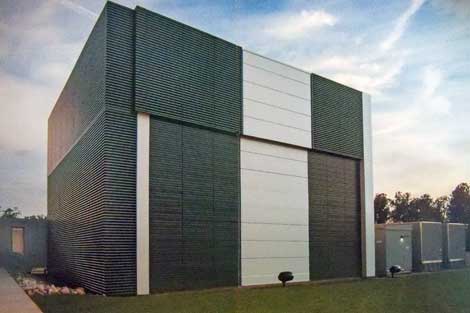 Mutual fund giant Fidelity Investments is commercializing a factory-built data center product called Centercore. The company is using the design to build out its own infrastructure, including portions of its $200 million data center project in Papillon, Nebraska. Fidelity has also begun offering its solution to the data center industry, and discussed its effort at last week's IMN Spring Data Center Forum in New York.

Centercore's approach differs from most existing modular data center solutions by using a multi-story design, with the initial units featuring a three-story structure. Fidelity, which is the nation's largest provider of 401(k) retirement plans, liked the concept of modular data center deployment. But after reviewing the leading modular solutions, it found that none precisely fit Fidelity's needs. So it built its own.

Fidelity worked with Boston-based design and engineering firm Integrated Design Group in developing the Centercore system, which is built around Core Units - building blocks that are constructed by a fabricating firm and assembled on the data center premises. It features a steel structure and a weather-resilient exterior shell that is engineered to withstand an F3 tornado.

Wells discussed Fidelity's plans for Centercore during a panel at the IMN event. The existence of the design was first revealed in January at the Open Compute Summit.

"This is a way we can deploy capital in an entirely new way, with flexibility, better efficiency and more adaptability to future technology changes," said Joe Higgins, the VP of Engineering and Corporate Sustainability Officer at Fidelity, in a presentation at Open Compute. "The CIOs that have gone through this innovation were absolutely blown away."

But in talking to those CIOs, Fidelity was careful in how it characterized the pre-fab offering, avoiding the use of the word "modular."

"We don't use the 'M word' anymore," said Wells. "Modular may not be the best term. We like the term off-site construction. So we branded it internally as Centercore, because when our CIOs heard modular, they thought container."

The Core Units use a column-free floor plan, and are designed to use a diverse range of power and cooling technologies and options, according to a marketing brochure from Fidelity, which says it can construct, deliver and assemble Centercore units in less than six months.

Fidelity will use the design as part of its new data center in Nebraska. Initially known as "Project Photon," the $200 million facility will feature both traditional raised-floor space and Centercore units that are built elsewhere and shipped to Nebraska.

Fidelity's move is the latest sign of momentum for for factory-built designs among America's largest financial firms. Goldman Sachs is using a modular design from IO, while AST Global has built pre-fab data centers for several large European banks.

It closely follows the announcement that Sears Holdings is entering the data center market with Ubiquity, a real estate business focused on converting former retail stores into data centers and disaster recovery sites. The two marquee brands are the latest entries in a data center market that has expanded beyond its historic core of specialist firms.

Notably, Corecenter reflects the culture of innovation at Fidelity, which has developed an in-house cloud computing platform based on open source principles. The huge investment firm is also a contributor to the Open Compute project, which develops standards for open hardware. Wells heads the Compliance & Interoperability Project for Open Compute.