Is Bigger Better? Why Scale Matters in Data Center Economics

In a cost-averse world in which Internet growth is creating an explosion of demand for data center space, CEO Hossein Fateh of DuPont Fabros believes the economics favor huge facilities operated by small teams of specialists. 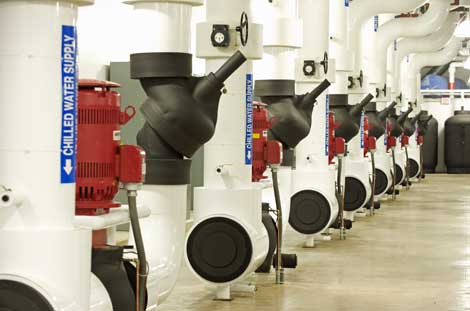 The DuPont Fabros ACC5 data center in Virginia has 16 huge chillers to provide cooling to the data halls, which house servers for some of the Internet's largest companies. (Photo: DuPont Fabros)

ASHBURN, Va. - Hossein Fateh has a head for numbers. When the discussion turns to the cost of building and operating a data center, he can quickly run through the cost of individual line items in the cost equation.

Fateh, the President and CEO of DuPont Fabros Technology (DFT), believes these numbers point to a huge shift ahead, as more companies shift their IT operations to third-party facilities built by developers that specialize in data center construction and operations. In a cost-averse world in which Internet growth is creating an explosion of demand for data center space, he believes the economics favor huge facilities operated by small teams of specialists.

An example is ACC5, a data center here in Ashburn, Virginia which is more than 1,100 feet long, and has more than 36 megawatts of power - enough to power a small city. ACC5 is the largest building on a campus that houses thousands of servers for Internet giants such as Facebook, Microsoft, Yahoo and Rackspace - but only until the even larger ACC7 comes online next year at 41.6 megawatts.

Few companies can afford to built 40 megawatt IT facilities to capture those operating savings. So DuPont Fabros will build them, and pass the savings on to their tenants. "With operating expenses, our scale is a benefit to our clients," said Fateh. "As our size grows, we have more and more buying power."

That power is growing steadily. DuPont Fabros operates more than 2.5 million square feet of data center space across four cities, providing 218 megawatts of electricity to power their tenants' Internet and IT operations. It is one of a small but growing group of companies that provide "wholesale" data center space, consisting of pre-built suites of raised-floor space to house servers.

This approach has won over some of the largest Internet players, companies like Apple, Facebook and Rackspace that comprise the new breed of "super wholesale" users -companies that have the capability to build their own data centers, but have opted to lease server space, swayed by the economics of buying versus building.

The big question: having proven itself with large tenants, can the wholesale model win over the legions of enterprise companies that build and maintain their own data center space? The wholesale players compete vigorously with one another for major deals, but they say the largest untapped audience is the companies that operates their own facilities, often on corporate premises or in small stand-alone facilities.

These companies have many reasons for sticking with in-house data center operations, including the need to control digital assets tied to compliance requirements and mission-critical business operations. There are also cultural issues, including in-house IT staff perceiving third-party providers as threats to their role in the organization.

These are powerful influences. But enterprises have been rethinking past assumptions in recent years, as the financial shock of 2008 and the emergence of cloud computing have prompted C-suite executives to consider a broader set of options for data center operations. That includes both "retail" colocation and wholesale data center space, as well as public cloud services.

Fateh believes large wholesale data centers can offer economies of scale that few companies can achieve. DuPont Fabros builds its massive facilities for between $7 million and $8 million per megawatt, well below the $12 million to $20 million per megawatt seen in smaller enterprise projects. The area where scale really kicks in is in operating costs, particularly as multi-tenant buildings expand beyond 18 megawatts.

"Our operating costs will go down when the Phase II of the asset leases up," said Fateh. "So we may have, for example, labor of six people handle the entire Phase I of one of our data centers. When we double the size of the building and go to Phase II, we may only increase by one additional person, meaning seven DFT staff plus security, and that labor force is spread over 36.4 megawatts. So when you look at the operating costs, when we hit the Phase II, the operating costs of the building drop.

"We show that to some of our tenants, and they very much appreciate it," he said.

But will those savings convince enterprises to give up their in-house data centers are move their gear into third-party space? Thus far wholesale data center space has leased more slowly in geographic markets that are heavy on enterprise users, such as New Jersey, where DuPont Fabros has struggled to attract tenants for a large facility in Piscataway. Part of the reason for that, Fateh says, is that enterprises simply have a longer decision-making cycle.

"In New Jersey, we're dealing with maybe 15 people making a decision within that company," Fateh said. "And instead of two or three tours, we may have 10 tours of the same tenants before they make a decision. Much of the growth in the three of our four markets is revenue-driven, if the tenant doesn't have additional data center space, it will impact revenue. In the New Jersey market, many of the tenants' decision-making is solely surrounded on consolidation and trying to reduce cost by consolidating. So it's a different tenant."

But Fateh says DFT is committed to the New Jersey market. In a cost-sensitive environment, Fateh says, the math is shifting in favor of buying instead of building.