The Azure Cloud, Exposed to the Azure Sky

The Microsoft data center campus in Quincy, Washington illustrates the evolution of data center design from huge concrete shells to compact modules sitting outdoors on a slab. Data centers have become glamorous, but the Quincy campus is at the forefront of a new minimalist approach offering one vision of the way of the future, and the way of the cloud.

Data center modules packed with servers sit outside at the newest phase of the Microsoft data center in Quincy, Washington. In the background is the vast concrete shell of the company's initial Quincy data center. (Photo: Microsoft)

QUINCY, Washington - As the Windows Azure cloud expands across central Washington, the physical building has all but disappeared. Lightweight enclosures filled with servers, known as ITPACs, sit under the barest of skeleton of a facility. They are self-contained data centers, assembled in days, housed on a concrete slabs and attached to a power "spine" supplying connections to the grid and the Internet. It’s completely open to the air, and in production.

With the latest phase of its data center in Quincy, Microsoft is getting out of the air conditioning business and deploying thousands of servers inside factory-built modules, which can be installed in days and allow the company to reach new heights of energy efficiency. The ITPACs take advantage of the natural environment in Quincy, allowing cool air to flow through the modules and cool the servers powering the Azure cloud.

Walking through the Quincy campus provides three very different experiences. After passing through security, you encounter Microsoft's first facility on the six-year old campus, a typical data center in an immense concrete shell. The next phase is a lightweight building housing ITPACs. The end of the trip takes you to open air - yet even here, the Microsoft cloud continues to grow.

After passing through a gate that could stop a truck, you arrive at the 470,000 foot concrete building, constructed by Microsoft in 2007. The Columbia campus feels like a fortress, with a gauntlet of security that includes a staffed access gate, biometrics and a mantrap corridor (which earns its name from the doors at both ends, which cannot open at the same time, limiting access to ) . After you're cleared, as a guest you receive a badge that expires after a set time, with the word "VOID" appearing out of nowhere. This is your traditional enterprise data center with all the trimmings, and then some. It features all the physical redundancy, the giant generators, and the massive UPS rooms you would expect to be hidden beyond such security.

Once you walk outside, you begin to see the evolution of Microsoft's data center design. The next building you enter isn’t really a building at all, but a steel and aluminum framework. Inside the shell are pre-manufactured ITPAC modules. Microsoft has sought to standardize the design for its ITPAC - short for Information Technology Pre-Assembled Component - but also allows vendors to work with the specifications and play with the design. These ITPACs use air side economization, and there are a few variations.

Essentially, they are data centers in a box. Cooling is supplied by fresh air and the equivalent of a garden hose. Fresh air is drawn into the enclosure through louvers lining the side of the module, which functions as a huge air handler with racks of servers inside. Each IT module is also equipped with an evaporative cooling system in which air passes through a moist media filter. The system uses just 1 percent of what the traditional data center uses.

Inside A 'Secret Garden' of Servers

These ITPACs are highly efficient, and quick to deploy. The shell around these first ITPACs is wall-screened.

However, by the end of the trip, you're back in open air, in a "Secret Garden" of servers. The building has disappeared, but each ITPAC unit acts as its own steel perimeter. You're still on camera, you're still in a highly secure area, but it feels wide open.

Just as the security evolves, so does the power infrastructure.  Cloud servers drive a whole different design, down to the components. 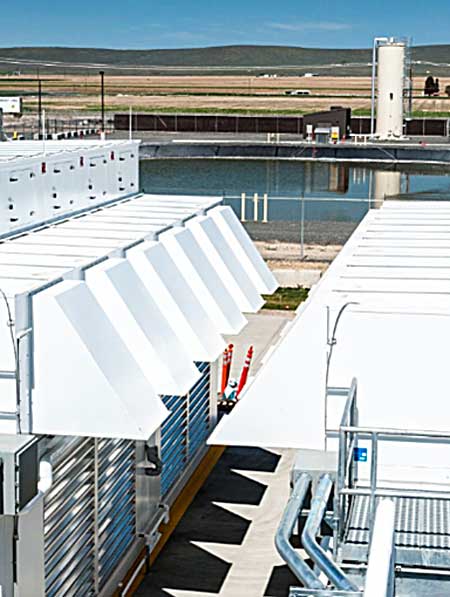 Some of the ITPAC data center modules at the Microsoft data center in Quincy, Washington, housed alongside a water treatment plant that harnesses recycled water used in cooling systems. (Photo: Microsoft)

There are generators for these ITPACs in Quincy that have never been used. The modules fail over to other modules in a compartmentalized practice known as "failing small." The company says it costs too much to remove and resell the surplus generators.

The fact that these generators have never been used highlights Microsoft's vision for the future of data center operations; resiliency through software. The company is asking its developers to think in cloud terms, and challenge the traditional ways of building redundancy through software. There are centralized systems monitoring the health of the network, allowing Microsoft to communicate with other facilities and manage failover between sites in an emergency.

Data center facilities have become glamorous. But in Quincy, advances in software are driving a sense of minimalism in the physical design. The ITPACs have two sides; the hotter side contains the power distribution. Air goes up and ejects. On cold days, it’s recirculated. On warm days, a spray of water is used.

Simpler Infrastructure That Can Be Replicated

The evolution isn't towards more physical redundancy, more moving pieces or more imposing data centers, but rather a simple infrastructure that is easily replicable - modular data centers that live outside, leveraging free air cooling. Microsoft is still in the early stages of this approach, but the outdoor ITPACs are proving very resilient thus far.

Microsoft has taken leaps and bounds in Quincy, having rethought its definition of a data center. In a world where providers are building facilities with redundancy in mind, it begins to look like unnecessary complexity. Microsoft's "Generation 5 " design is about convergence. All design is standardized and it’s all running on software. The company is trying to commoditize for the industry, and says it is committed to sharing the insights it derives from an immense R&D budget, a lot of which goes into data centers.

The implications for the industry are significant. Microsoft is taking these ITPACs and thinking outside the box (or facility). Think of Wyoming, where they’re testing a biogas-powered data center with a small modular installation. Matching increasingly efficient and resilient design with renewable sources of energy may mean the data cneter industry will no longer be misunderstood by the mainstream media, who sees large generators and thinks of data centers as energy-consuming, polluting monsters.

The Quincy campus shows the evolution of data center design. The traditional colo facility isn't going to go away any time soon due to enterprise requirements. However, the thinking around cloud is allowing design to shift into software-driven resiliency as the way of the future.