Iron Mountain is entering the data center business in a bigger way. The company has announced plans to build and lease data centers, starting within the Underground, its 145-acre records storage facility located 220 feet underground in a former limestone mine in Pennsylvania. 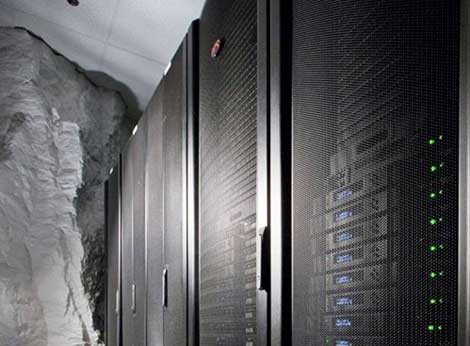 Racks of servers reside next to the limestone wall of an underground cave inside an Iron Mountain data center in the Underground in Boyers, Pa. (Photo: Iron Mountain)

After several years of quietly developing space in its massive underground facility in Pennsylvania, Iron Mountain is entering the data center business in a bigger way. The company has announced plans to build and lease data centers, offering both colocation services and wholesale suites to enterprise and government customers.

Iron Mountain is building out data center space within the Underground, its 145-acre records storage facility located 220 feet underground in a former limestone mine in Boyers, Pa., about 50 miles north of Pittsburgh. The facility has long been used for storing paper records and tape archives, and has an existing workforce of 2,700 employees, as well as its own restaurant, fire department, water treatment plant and back-up power.

But the Underground also offers a naturally low ambient temperature of 52 degrees, and has an underground lake that can be used to provide cool water for data center cooling systems, eliminating the expense of energy-hungry chillers. Iron Mountain developed a proof-of-concept facility known as Room 48, and has subsequently leased data center space to Marriott and several government agencies.

With the launch of Iron Mountain Data Centers, the company is seeking to leverage both the Underground facility and its existing document storage relationships with many of the nation's largest IT users.

"We spent a lot of time looking at the data center market," said Mark Kidd, senior vice president and general manager of data centers for Iron Mountain. "Most of today’s data center providers sell space. We’re packaging together services that will enable enterprises to outsource the ongoing management of their data center. We want to make it easier for enterprises to outsource. And our DNA in tracking information assets from creation to disposition is particularly differentiating for organizations that must comply with industry regulations. No one in today’s data center market has our track record in security and facilitating compliance."

Kidd says Iron Mountain is building "several megawatts" of speculative technical space at the Underground to get its data center program rolling. Up to 10 megawatts of critical power is available, Kidd said. The facility currently has two carriers available, but will add two more within the next 90 days and expects to have six providers in the facility within 6 months.

"The fact that it is an active multi-tenant data center makes it pretty easy to get carriers in," said Kidd of the 1.7 million square foot facility. "We are currently a living, breathing, enormous facility with lots of space to build out."

Iron Mountain's strategy will provide the largest test yet of the appetite for underground "data bunkers," bringing scale and marketing muscle to a niche that has been largely limited to smaller providers. These "nuke proof" underground facilities are often based in caves or former telecom or military installations, and appeal to tenants seeking highly secure space, such as government agencies, financial services firms, and healthcare providers or other enterprises with high compliance requirements.

By bringing a wholesale offering into the data bunker space, Iron Mountain is bringing a name brand into the data bunker space, which may capture the interest of national customers considering underground space. The company is offering both retail colocation space and wholesale suites. Services being offered include engineering and design, development and construction, and ongoing facility operations and management.

In 2008, Marriott leased 12,500 square feet of space to establish a data center in the Underground for disaster recovery purposes.

"We have always had a rigorous and constant focus on having disaster preparedness in place," said Dan Blanchard, vice president of enterprise operations at Marriott. "More than five years ago, we determined that we needed more flexibility and we got it. Today we have a data center that provides Marriott with a tremendous capability for disaster recovery, and we have a great partner in Iron Mountain."

Looking Beyond the Underground

In the short term, Iron Mountain's data center business will focus on the Pennsylvania facility. But the company realizes that a long-term data center strategy will need to include facilities in more than one market.

Kidd notes that Iron Mountain has the real estate portfolio to make that possible. The company operates 800 facilities, and owns about 40 percent of those sites. The company is in the process of converting to a real estate investment trust (REIT), a process it hopes to complete by the beginning of 2014.

A REIT is a corporation or trust that uses the pooled capital of many investors to purchase and manage income property. Income comes from the rent and leasing of the properties, and REITs are legally required to distribute 90 percent of their taxable income to investors. Three of the largest public data center developers – Digital Realty (DLR), DuPont Fabros (DFT) and CoreSite Realty (COR) – are organized as REITs. 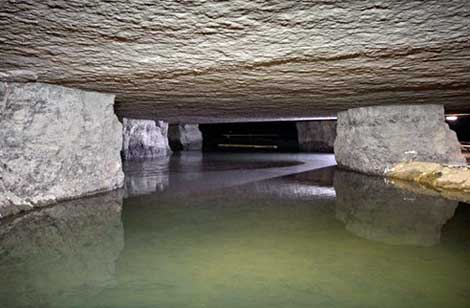