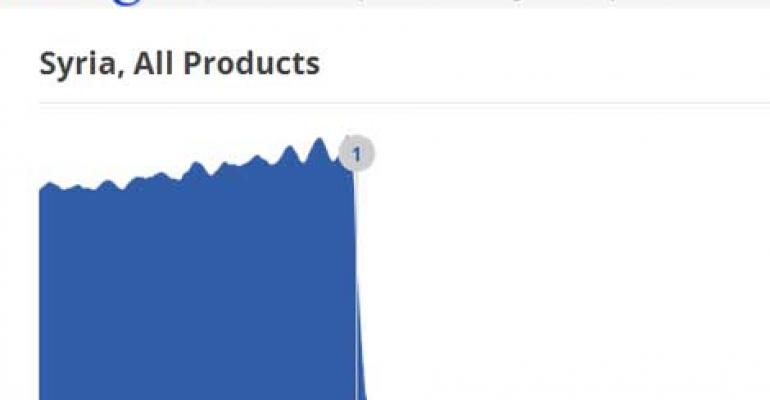 Syria Cut Off From the Internet

The war-torn country of Syria effectively disappeared from the Internet Tuesday afternoon, according to multiple monitoring services. 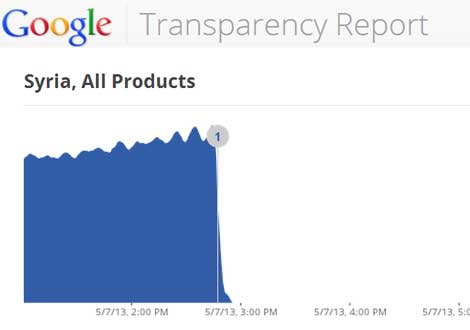 The war-torn country of Syria effectively disappeared from the Internet Tuesday afternoon, according to multiple monitoring services. The disruption, which appears to have affected all Internet traffic from the country, began about 2:45 p.m. Eastern time, which is about 9:45 p.m. in Syria.

The dropoff in Internet traffic is clearly visible in monitoring from Google (see chart above). It has been confirmed by Rensys, a leading network monitoring service. "Renesys confirms loss of Syrian Internet connectivity 18:43 UTC.BGP routes down, inbound traces failing," the company tweeted.

The outage was quickly noted by Umbrella Security Labs in a blog post by CTO Dan Hubbard.

"Effectively, the shutdown disconnects Syria from Internet communication with the rest of the world," wrote Hubbard. "It’s unclear whether Internet communication within Syria is still available. Although we can’t yet comment on what caused this outage, past incidents were linked to both government-ordered shutdowns and damage to the infrastructure, which included fiber cuts and power outages."

It's worth noting that this isn't the first time this has happened. Syria was previously cut off from the Internet last November.

"Many Syria-watchers feared that the (November) Web shutdown was a precursor to some sort of coordinated regime counterattack or campaign; that President Bashar al-Assad had not wanted the world to see what he was about to do," notes the Washington Post. "No such campaign ever appeared to come, however. Later, many Syria analysts concluded that the regime may have been seeking to hamper rebel communication."