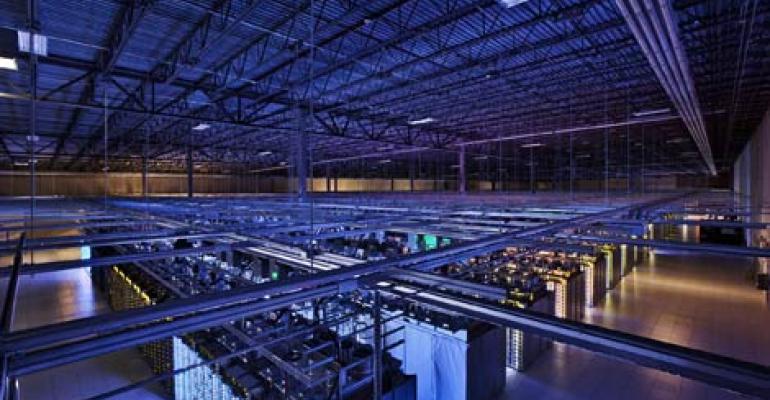 Your iTunes downloads, Facebook posts and YouTube videos travel through small rural communities that are home to billion-dollar data centers from the world's largest cloud builders. Here's a look at these facilities and how they're changing these communities.

An overhead view of the server infrastructure in Google's data center in Council Bluffs, Iowa, where the company has invested more than $1 billion. (Photo: Connie Zhou for Google)

Maiden. Council Bluffs. Boydton. Bluffdale. And now Lenoir and perhaps Altoona. These are the cities you'd never heard of that have become the homes of billion-dollar server farms.

Your iTunes downloads, Facebook posts and YouTube videos travel through these small rural communities en route to your desktop and mobile device. The growth of the digital economy is not just reshaping how we use the Internet, but creating a new data center geography in which armadas of servers now reside in suburbs or rural towns, often outnumbering the humans in these communities.

The economics of hyper-scale computing favor cheap land and cheap electricity, which are unavailable in many of the historic Internet hubs, which are located near major cities. This has created an unusual side effect – major data centers are transforming the economies of small towns around the U.S., placing them on the front line of the race to build out the infrastructure that runs the Internet.

A handful of these towns have received concentrated investment of more than $1 billion on a campus of server farms. Google, Apple, Microsoft have each deployed these billion-dollar data centers in little-known towns, and Facebook is not far behind.

Symbols of the New Economy

These projects have been hailed by governors and economic development officials, who see data centers operated by Internet titans as symbols of the new economy. Huge server farms are hailed as saviors of rural communities, which have often been abandoned by the factories that were once the lifeblood of the local economy.

Yet data centers don’t fit neatly into the traditional model of economic development engines. They have been reliable generators of hundreds of construction jobs, which are welcome but temporary. But the advanced level of automation at work in data centers translates into a limited number of permanent full-time jobs, and much of the investment arrives in the form of servers, generators and UPS equipment.

Here’s a look at the billion-dollar data centers:

There are two other examples of data center clusters that have transformed small rural communities:

These locations all offer abundant land for massive facilities that can house of tens of thousand of servers, and the electricity to power these armadas of servers. They offer tax incentives that make it cheaper for data center operators to buy their land and servers. In many cases, they also offer the opportunity to cool servers using outside air instead of power-hungry chillers, slashing the cost of operating the data center.

The Economic Impact of a Data Center

What have these data center developments meant for these communities? Some of the best data comes from Quincy, Washington, where construction of Yahoo and Microsoft data centers boosted property tax values in the city of Quincy from $260 million in 2006 to $764 million in 2009. As a result, property tax collections grew by more than $1.4 million over the period, while school taxes in Quincy grew by $1.6 million.

Quincy used its higher tax revenues to improve city services, including improvements to its library, senior center, museum and playground equipment. Tax revenues were also been earmarked for new equipment for the police and fire departments and emergency medical services.

Facebook has invested $210 million to build the first phase of its new data center in Prineville, according to a study commissioned by the social network. About $75.7 million of that capital spending went to Oregon companies and workers. Facebook employs 55 full-time or contract employees, with a total annual payroll of about $3.3 million. The average annual salary of Facebook’s data center employees is $47,200, compared to a regional average of about $35,071 in 2010.

The report from ECONorthwest found that Facebook’s capital spending created $24.4 million in economic activity, including $9.2 million in personal income and 234 jobs. These impacts include about 80 direct jobs for local construction and other workers employed on-site, and about $1.2 million in sales for local lodging, eating and drinking, and retail sectors as a result of per diem spending by non-local workers.

The economic cost-benefit analysis has been tougher in North Carolina, where state and local governments have been criticized for the tax breaks offered to attract Google, which are estimated to total up to $260 million over the life of the project. There have been mixed results in the effort to retrain local workers from the furniture industry to seek jobs at Google, as noted in a 2009 series by NPR.

But with Google's investment now at $1.2 billion, local officials say it has been worth it.

“Google pushes Caldwell County into a hub for the knowledge economy of the future,” said Caldwell County Chairman Jeff Branch. “Their continued investment in the Lenoir data center is a sign of their commitment to the area. It shows in other tangible ways with community activities they do to support small business owners and students learning the science and engineering skills necessary to succeed in the future.”

Google has awarded more than $1 million in grants to Lenoir-area local schools and nonprofits since 2008, and Google employees are engaged in a variety of volunteer projects in the community, including efforts to boost education in the STEM fields (science, technology and math). The search giant has made a similar effort in the Council Bluffs community, awarding $600,000 in local grants.

So what's ahead for Altoona, Iowa? Facebook said last week that it would build a new data center in Altoona, a suburb of Des Moines. The company will spend $300 million in the first phase of the project, but local officials have said the project's long-term investment could exceed $1 billion.

Facebook has been pro-active in engaging the local business community in Oregon and North Carolina. While some are quick to point out that the biggest impact of new data centers is construction jobs, the breakneck pace of Facebook's building program has made these more like permanent jobs in these communities, according to Tom Furlong, Vice President of Site Operations at Facebook.

"We've basically been under construction continuously on those sites since we began in Oregon," said Furlong.

The trend is likely to continue. As we noted last year, "as states continue to offer tax incentives for data center projects, don’t be surprised to see massive server farms pop up in towns you’ve never heard of before."