Enterprise cloud usage has begun to hit a point of maturity, and there’s increasing preference for a multi-cloud approach, according to a survey from cloud management provider RightScale. 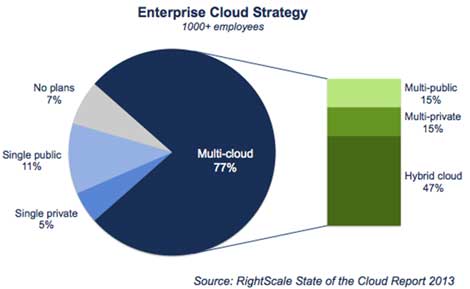 Enterprise cloud usage has begun to hit a point of maturity, and there’s increasing preference for a multi-cloud approach, according to a survey from cloud management provider RightScale. The report also documents the rise of DevOps – the marriage and integration between Development and Operations – which has grown like a weed, taking a hold in 54 percent of respondents.

The company assessed what stages businesses and enterprises were in their cloud strategies, with 49 percent either partially or heavily using cloud, 17 percent developing cloud strategies and 26 percent working on proof-of-concepts or first projects. That means only 8 percent of respondents weren’t thinking about or planning to use cloud.

The trend shows organizations moving up the maturity model, and reaping increasing benefits as they do. The top benefits reported in the survey are faster access to infrastructure, greater scalability, faster time to market with apps, and higher availability. The main issues surrounding cloud tend to disappear as these organizations move up in terms of cloud maturity. For example, security and compliance is often a major concern. It’s viewed as less of a challenge as cloud usage matures: 38 percent of beginners but only 18 percent of experienced cloud users viewed it as a challenge. Thirty percent of "Cloud Beginners" reported that they were gaining faster access to infrastructure, while 87 percent of "Cloud Focused" respondents realized that same benefit.

More cloud is being used, and it’s being used more often in a hybrid or multi-cloud situation, and DevOps has indeed taken a grip on the enterprise. RightScale has interest across the board here, from helping cloud watchers and beginners to more advanced users who want to scale out their use of cloud.  The full RightScale 2013 State of the Cloud report is available here (registration required), and last year’s survey here