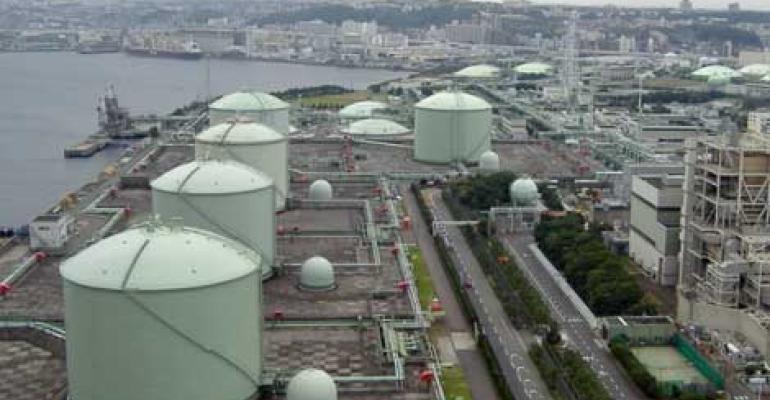 Will future data centers be located next to liquid natural gas plants, like this one in Tokyo? That's the idea being put forth by TeraCool. (Photo by Yo-sei_Shoshi via Wikimedia Commons)

TeraCool has developed a way to bring the two industries together. The company says its approach can achieve mutual energy conservation, significant cost savings and environmental benefits including air, water and green house gas emissions reductions. It has created a method that links a data center’s rejected heat and a Liquified Natural Gas (LNG) terminal’s surplus refrigeration via a heat transfer loop. There’s a potential symbiotic relationship here, as the waste heat from servers can help vaporize natural gas, and the energy released from the process could in turn power a data center.

Natural gas is extracted from the ground, then liquefied by condensing it. It is transported in liquid form in tankers to LNG plants and stored in tanks, then turned back into a gas when it’s needed. The process stores energy, and the process releases energy. The energy and cooling normally go to waste because they’re usually isolated from other potential buildings and centers that might be able to use this excess energy. Now, it’s a matter of convincing data centers to build and align with this idea.

Other GEIT Award winners of note

“There’s two things behind the award scenes,” Matt Stansberry, Director of Content and Program Director, notes about the awards. “The judges panel consists of radical, household name companies. It’s a double blind process, one of the most democratic processes out there. The other thing that’s important about the rewards is the data churn. The documents they submit are really about sharing what worked for them. This is the biggest reason Ken (Brill, founder of Uptime Institute) started this was to get people talking.”

“The bottom line is that Green IT has gotten a lot better, especially on the enterprise level,” said Stansberry.

Other winners include Interxion which won the "Facility Retrofit Award" for its use of seawater to cool its Stockholm data center.  Interxion is a leading provider of cloud and carrier-neutral colocation data center services in Europe, supporting more than 1,300 customers at 33 data centres across 11 countries.

AOL and Barclays won the second annual Uptime Server Roundup for their efforts to improve data center efficiency. "The purpose of Server Roundup is to highlight what should be a routine activity – removing obsolete hardware from the data center, and moving it to the forefront of the conversation," said Stansberry.

This was the second straight win for AOL, which prevailed in the initial 2011 roundup. This year is decommissioned 8,253 servers, resulting in (gross) total savings of almost $3 million from reduced utility costs, maintenance and recovery of asset resale/scrap. Environmental benefits were seen in the reduction of more than 16,000 tons of carbon emissions, according to AOL.

Barclays, a global financial organization, removed 5,515 obsolete servers in 2012, with power savings of around three megawatts, and $3.4 million annualized savings for power, and a further $800K savings in hardware maintenance.

According to industry estimates, around 20 percent of servers in data centers today are obsolete, outdated or unused. Decommissioning one rack unit (1U) of servers can result in a savings of $500 per year in energy costs, an additional $500 in operating system licenses and $1,500 in hardware maintenance costs.