Google today announced a major expansion of its data center campus in North Carolina, saying it will spend $600 million to build new server farms. The search giant also said it will use its purchasing power to jump-start a renewable energy program for Duke Energy, the utility that provides electricity to the Lenoir facility. 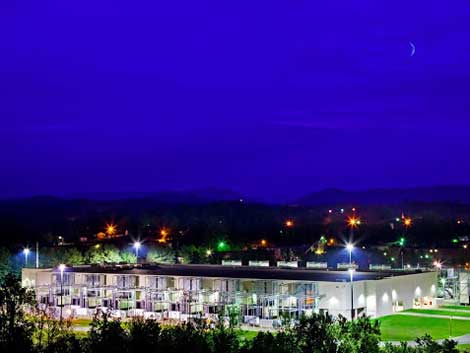 The Google data center campus in Lenoir, North Carolina at night. Google is investing an additional $600 million to expand the campus. (Photo: Connie Zhou for Google)

Google today announced a major expansion of its data center campus in Lenoir, North Carolina, saying it will spend $600 million to build new server farms and populate them with  IT equipment. The search giant also said it will use its purchasing power to jump-start a renewable energy program for Duke Energy, the utility that provides electricity to the Lenoir facility.

The announcement brings Google's investment in Lenoir to $1.2 billion. The small town in western North Carolina, where the economy was once driven by the furniture industry, is now a major conduit for Internet traffic for Google search, Gmail and YouTube videos.

"When Google builds a data center, it chooses a site large enough to accommodate growth and a site where we want to establish a long-term commitment to the local community," said Data Center Operations Manager Enoch Moeller. "We are proud to be a part of the City of Lenoir and Caldwell County community where our employees live, work and play. North Carolina and the Lenoir community are great places in which to work and grow."

Google also said that it will be the pilot customer in a new program from Duke Energy, which create a new service tier to deliver entirely renewable energy to large customers. Duke will file the plan with regulators within 90 days, according to Gary DeMasi, Director of Global Infrastructure for Google.

Prompting Utilities to be Greener

Google's approach is significant for several reasons: it meets Google's goal of using programs that create new generation of renewable energy, and prompts utilities to boost their focus on clean energy sources. This has been a major focus in North Carolina, where Greenpeace has pressured Apple over the energy sourcing for its huge data center in Maiden, which is about 30 miles south of Google's Lenoir facility. Apple has made a huge commitment to on-site renewable generation in Maiden, building a huge solar power array and a fuel cell farm power by gases from nearby landfills.

Google is taking a different approach, tracking a model championed by Greenpeace, in which the data center industry uses its purchasing power to encourage utilities to offer more renewable options. In North Carolina, Duke is pledging to create a new rate plan (or "tariff") for customers that want energy sourced solely from renewable sources.

"The concept of a 'renewable energy tariff' is simple," Google explained in a white paper. "Utilities would offer companies like Google the choice to buy renewable energy through a new class of service. The service would be voluntary, provided only to those companies that request it but open to all customers that want it and meet basic criteria. A key aspect of the tariff is that the costs of procuring the renewable power would be passed on to the customer that has elected this option, so the goal would be to avoid impact on other ratepayers."

Google has been considering this type of approach for some time. In March 2012, Google data center executive Joe Kava said the data center industry could use its leverage to prompt greener practices from major utilities.

“I’d like to challenge the industry to pool its resources,” Kava said at an industry conference. “Why can’t we, as an industry, form a consortium to buy renewable power and push it to the grid. That way we can green the power we are all using ... “To us, it’s about increasing the content and percentage of renewables on the grid. If we can increase the green content on that grid, we’ll also green our data center."

When asked whether Google had contemplated such an approach in North Carolina, Kava said there had been no active effort to organize other players. But if Duke succeeds in creating an all-green service tier, other data center companies could participate, further boosting demand for renewable generation.

"Offering companies like Google a renewable energy option has many advantages," DeMasi wrote in a post on the Google blog. "Because the service is made available to a wide range of customers, companies that don’t have the ability or resources to pursue alternative approaches can participate. And by tapping utilities’ strengths in power generation and delivery, it makes it easier for companies to buy renewable energy on a larger scale."

Google's move was hailed by Greenpeace.

“Google’s announcement shows what forward-thinking companies can accomplish when they are serious about powering their operations with clean energy," said Greenpeace International Senior IT Analyst Gary Cook. "Before today, even large energy users in North Carolina were only offered dirty energy by Duke Energy: coal, nuclear and gas. In living up to its commitment of powering 100% of its operations with renewable energy, Google has given Duke Energy the push it needed to offer a Renewable Tariff which could finally mean access to clean energy for Duke Energy’s customers in North Carolina.”

Will Google Pay a Green Premium?

The approach is not without its challenges. Utilities will need to work out the details of the service with state regulators, and find cost-effective renewable projects.

But the major issue for data center providers will be cost, as renewable energy sources are currently more expensive than the current industrial rates from Duke Energy of about 4.5 cents per kilowatt hour, which is primarily sourced from coal and nuclear power. Google is aware of this discrepancy.

“We might take a loss (at first),” said Kava in his presentation last year. “But over a 20-year period, I’m betting the price of power will go up.”

By committing to be the pilot customer for Duke, Google appears to be ready to pay a premium for renewable energy, at least in North Carolina. Even a "green tariff" would likely include some non-renewable energy, since solar power is only available during the day and wind power can be intermittent.

"If needed, a supplemental 'shaping' service from other (likely non-renewable) generation would fill in the gaps of variable renewable resources and ensure
that customers receive continuous and reliable service," Google said in its white paper. "Thus,the tariff will eliminate many of the complexities of intermittent renewable energy production for customers."