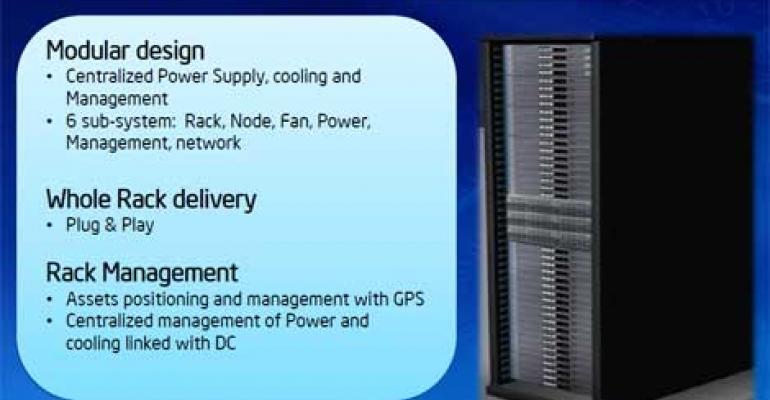 Intel Continues to Rethink the Rack of the Future

Intel is continuing to advance its vision for new data center designs that rethink the traditional placement of components within the server and rack. Intel today offered details on an initiative by China's largest Internet companies, along with reference designs that could help more OEMs and end users deploy these designs. 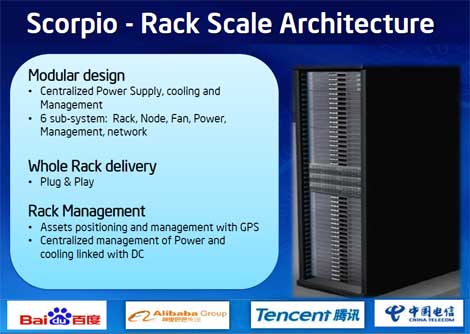 Intel is continuing to advance its vision for new data center designs that rethink the traditional placement of components within the server and rack. After unveiling a prototype at the Open Compute Summit in January, Intel today offered details on a similar initiative by China's largest Internet companies, and promised to release reference designs to help OEMs and end users deploy these designs.

An early example of this vision is the Project Scorpio rack, which was jointly developed by Tencent, Baidu, Alibaba and China Telecom, who worked with technical advisors from Intel. In the Scorpio rack, the fans and power supplies are shifted from individual servers to rack-level "power zones."

Not Unique, But A Step on the Journey

That in itself is not a unique concept, as there have been a number of designs that have shifted fans and power to the rack level, including various blade chassis, the CloudRack from SGI/Rackable and the Open Compute designs. But Intel sees Scorpio and similar efforts as the first step toward a larger rethinking of the server rack.

A prototype of  the next phase was on display at the Open Compute Summit in the form of a photonic rack featuring technology from Intel, Corning, Quanta Computer and Facebook, which uses high-speed optical network connections to "disaggregate" the server, taking components that previously needed to be bound to the same motherboard and spreading them out within a rack.

The Intel/Quanta rack separates components into their own server trays – one tray for Xeon CPUs and another for its latest Atom CPUs, another for storage. When a new generation of CPUs is available, users can swap out a the CPU tray rather than waiting for an entire new server and motherboard design. The design is enabled by silicon photonics, which is at the heart of Intel's interest in next-generation rack design.

Silicon photonics uses light (photons) to move huge amounts of data at very high speeds over a thin optical fiber rather than using electrical signals over a copper cable. Intel’s prototype can move data at up to 100 gigabits per second (Gbps), a speed that allows components to work together even when they’re not in close proximity to one another.

Intel's strategy for evangelizing new rack designs involves participating in collaborative efforts like Open Compute and Scorpio, but also putting forward its own vision for how silicon photonics can revolutionize rack design (See Meet the Future of Data Center Rack Technologies by Intel's Raejeanne Skillern, for more details). The next phase is a "modular refresh" of components, which is of particular interest to Facebook.  When a new generation of CPUs is available, users can swap out a the CPU tray rather than waiting for an entire new server and motherboard design.

At IDF Beijing, Intel articulated this vision of how rack scale architecture will change how servers are built and refreshed. "Ultimately, the industry will move to subsystem disaggregation where processing, memory and I/O will be completely separated into modular subsystems, making it possible to easily upgrade these subsystems rather than doing a complete system upgrade."

Separating the processor refresh cycle from other server components would create some interesting possibilities for Intel, which currently works closely with OEMs to coordinate the inclusion of new chips in new server releases. Facebook hardware guru Frank Frankovsky has said the ability to easily swap out processors could transform the way chips are procured at scale, perhaps shifting to a subscription model.

For now, Intel is developing a reference design that utilizes Intel technologies - including Xeon and Atom SoCs, Intel Ethernet switch technology and silicon photonics - that can be used by OEM providers to develop and deliver racks. The company has already developed a design guide for the Open Compute Project featuring intra-rack optical interconnect scheme that utilizes a New Photonic Connector (NPC).

Here's a slide from Intel's IDF Beijing presentation that outlines its vision for rack scale architecture (click for a larger image): 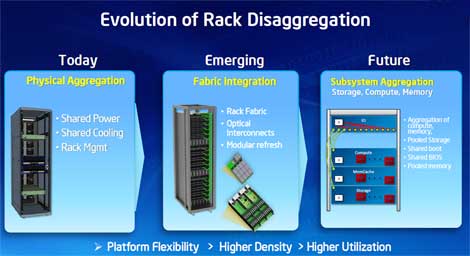