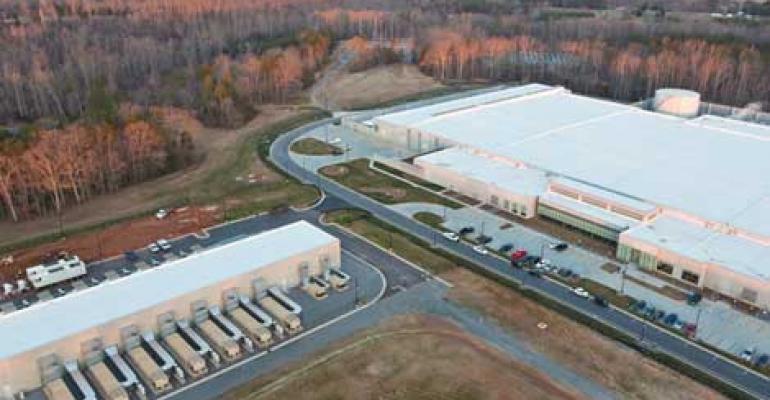 Apple Ready to Roll in Reno .. With a Coop?

Apple Insider has obtained some aerial photos and one close-up of a new structure on the Apple data center site in Reno, Nevada, which raises some interesting questions about its design and how Apple is staging its deployment of capacity.

Apple Insider has been working hard to unearth information about the Apple data center project in Reno, Nevada. After a drive-by shed little light, the site has obtained some aerial photos and one close-up of a new structure on the Apple site.

"As the project site was still being finalized, the company asked for permission to begin work on an initial, aproximately 20,000-square-foot structure to get head start on the construction project," AppleInsider reports.

This is similar to the approach the company has taken in Prineville, Oregon, where a small structure was deployed quickly, with two larger buildings to follow.

What does this Apple facility look like? Hop over to Apple Insider for a quick look at the photos, and then come back. It's a long, rectangular structure with a sloped roof with a peak in the center. Let's see, where have we seen something like that before ...

That's an image of the Yahoo "Computing Coop" data center in Lockport, New York. The similarity shouldn't be too surprising, since one of the Yahoo data center executives who worked on the Yahoo Lockport project, Scott Noteboom, now is a leader of the data center team at Apple.

There are some similarities between the two designs, but some differences as well. Both retain the "coop" structure, adopted from chicken coops that channel hot air into the upper area of the building. Both have large louvers and fans, effectively turning the building into a huge air handler to circulate air around the IT equipment.

But the Apple facility in Reno appears to be missing the "cupola" that runs along the crest of the roof on the Yahoo data centers, which allows rising server waste heat to be evacuated from the highest point of the roof. This suggests that Apple is using a different approach in handling the removal of hot air. The AppleInsider photos don't present a full view of the positioning of the louvers on the side of building, but there are large fans and louvers at the end of the facility - which could mean an airflow pattern in which fresh air enters the side of the building, flows through the servers, and then through the hot aisle and into a plenum that brings the hot air out through the end of the building. Or not - only Apple knows for sure.

It's interesting to note that the design in Reno is different from the smaller "tactical data center" that sits alongside the 500,000 square foot main building at Apple's campus in Maiden, North Carolina. Here's a photo from Apple:

As is the history with Apple, many of the technical details remain undisclosed. But what's clear is that Apple is using a combination of small and large facilities, and mixing traditional big-box brick-and-mortar structures with pre-fabricated  modular components to speed its time to market. It's a flexible approach that matches facility design to capacity planning - as well as the possibility that workloads are being matched to different types facilities (as Facebook has done with its cold storage data center).