Sabey Data Centers has opened the doors on Intergate.Manhattan, having completed an extensive retrofit and commissioning process. The property offered a rare opportunity to convert a New York high-rise into a purpose-built data center. 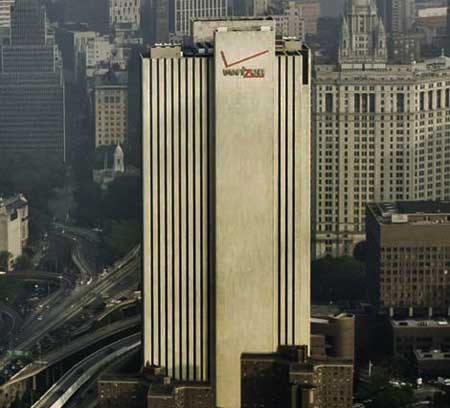 Sabey Data Centers has retrofitted the Verizon building at 375 Pearl Street as Intergate.Manhattan, a data hub for the 21st century. (Photo: Sabey)

Some New Yorkers who look upon the huge Verizon high-rise at 375 Pearl Street have trouble seeing past its foreboding stone facade. The team at Sabey Data Centers saw it as a blank canvas: an opportunity to remake 1 million square feet of Manhattan real estate as a high-tech data hub.

"This has been an extremely exciting project," said John Sasser, Vice President of Operations at Sabey Data Centers.  "There aren't many opportunities to go into a 32 story building and remake it as a purpose-built data center."

On Wednesday Sabey opened the doors on the new Intergate.Manhattan, having completed an extensive retrofit and commissioning process. Sabey, a Seattle-based developer, outfitted the property with all new core infrastructure and upgraded the power capacity from 18 megawatts to 40 megawatts.

The building was developed in 1975 as a Verizon telecom switching hub and later served as a back office facility. Verizon continues to occupy three floors, which it owns as a condominium. The property was purchased in 2007 by Taconic, which later abandoned its redevelopment plans. Sabey and partner Young Woo acquired the building in 2011.

Sabey saw an opportunity at 375 Pearl, but there were many challenges as well, according to Leonard Ruff, a principal with the design firm Callison, which has partnered with Sabey on several of its data center projects. Ruff and Sasser shared details of the retrofit project earlier this month at the DatacenterDynamics Converged conference in New York.

One issue was more than 35 years of undocumented changes in the building's mechanical and electrical systems, according to Ruff. The vertical chases were highly congested with conduit, wiring and piping, and the tight site footprint didn't allow much space for storing construction supplies and equipment. There was also the presence of Verizon and "severe penalties" should the construction process interrupt the telco's operations, which continued apace on floors eight through 10.

The building provided an opportunity to re-think data center operations in a vertical layout. “We can take that 40 megawatts and spread it across the building in whatever way makes sense," said Ruff.

The 13.2 kV electrical service enters the building at a substations on the second and third floor. The fourth and fifth floors house the UPS infrastructure (double-conversion systems with efficiency of up to 97 percent), while diesel backup generators are housed on floors two, three, four and 31 and vent their exhaust through the roof.

The initial phases of data center technical space are being deployed on four floors - 6, 7, 11 and 12. Each floor has generous vertical space, with ceiling clear heights of between 14 and 23 feet. Sabey will offer hot aisle containment for its customers, with a water-side economization system supported by five cooling towers on the roof. The roof can accommodate up to 16 cooling towers if needed as Sabey expands it data center operations to additional floors within the building.

Diesel fuel will be stored in the basement, which has a larger footprint than the high-rise section of the building, allowing Sabey to store 155,000 gallons of fuel at present, with the ability to add another 100,000 gallons as it expands. Sasser said the basement level at 375 Pearl remains more than a dozen feet above the high water mark seen during Superstorm Sandy, but said Sabey is taking no chances and equipping the fuel depot with submersible pumps.

On Wednesday, the building was opened to New York media for a ceremony with city officials. That included Mayor Michael Bloomberg, who used most of his podium time to speak about anti-crime measures to address political news developments in New York.

Company president Dave Sabey took it in stride, noting that the city's progress on crime helped construction workers and staff feel safe during the development process. "This is a big day for Sabey, and for New York City," said Sabey.

Sabey now operates 3 million square feet of data center space as part of a larger 5.3 million square foot portfolio of owned and managed commercial real estate. The company has developed a national fiber network to connect its East Coast operations with its campuses in Washington state, where it is the largest provider of hydro-powered facilities.

All this comes against the backdrop of Superstorm Sandy, which is prompting a variety of responses in data center operations and real  estate as companies assess the storm and its implications for disaster recovery. While some companies are now wary of New York, others are seeking new space outside of the financial district, which experienced the brunt of the flooding from Sandy's storm surge. Those companies represent some of the most promising prospects for new space in other areas of Manhattan, including the Sabey building.