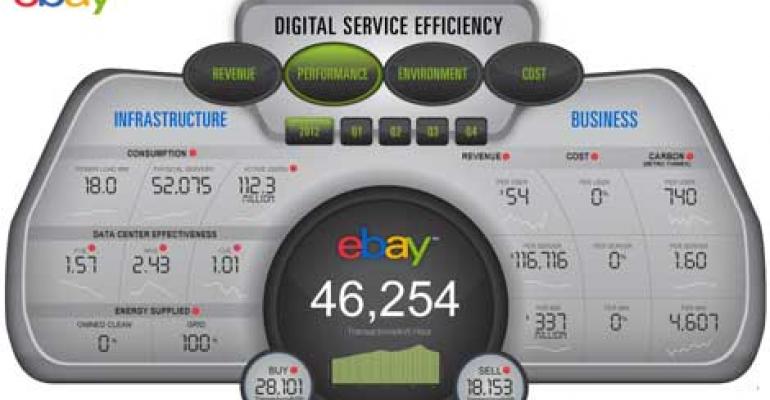 eBay's DSE: One Dashboard to Rule Them All?

Has eBay developed one dashboard to rule them all? The company took a major step closer to the holy grail of a unified data center productivity metric, unveiling a methodology called Digital Service Efficiency (DSE) at  The Green Grid Forum 2013 in Santa Clara, Calif. 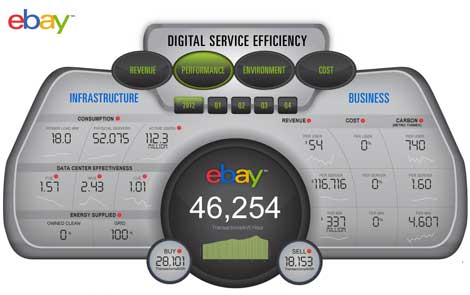 Has eBay developed one dashboard to rule them all? The company took a big step closer to the holy grail of a unified data center productivity metric, unveiling a methodology called Digital Service Efficiency (DSE) at The Green Grid Forum 2013 in Santa Clara, Calif.

In the conference keynote, eBay's Dean Nelson outlined a system of metrics to tie data center performance to business and transactional metrics. DSE enables balance within the technology ecosystem by exposing how turning knobs in one dimension affects the others, providing a "miles per gallon" measurement for technical infrastructure. In drawing direct connections between data center performance and cost, the dashboard provides eBay with insights that go directly to its bottom line.

"We’re making $337 million per megawatt," said Nelson, the Vice President, Global Foundation Services at eBay. "That’s the productivity of our infrastructure, not the cost overhead. Through the DSE Dashboard, these numbers are laid out in simple terms that are understandable across business roles. This starts conversations at every level about how we achieve goals. It’s that bridge that’s been missing for so long."

That data point provides a vivid example of the productivity of data center infrastructure, which typically has construction costs of $5 million to $10 million per megawatt for large users like eBay.

How To Measure Productivity?

The Green Grid has spent several years evaluating various metrics that could be used to measure data center productivity. The industry group popularized the use of Power Usage Effectiveness (PUE) as the leading metric for data center energy efficiency. But PUE was primarily a measure of facilities infrastructure, and didn't address the effectiveness of IT systems within the data center. Various gauges have been proposed to measure productivity, but none has addressed all the objectives for an industry-level metric.

With Digital Service Efficiency, eBay has developed a methodology it believed can bring these diverse puzzle pieces together. It's based on eBay's e-commerce operations, but the company says its approach can be adapted by other data center operators, who can substitute their own business metrics. "While the actual services and variables are specific to eBay, the methodology can be used by any company to make better business decisions," eBay writes in an overview of its process. "Just as 'your mileage will vary' from any MPG rating, DSE provides an introspective view of how well a company has optimized its technical infrastructure."

Most importantly, eBay believes it has sorted out a way to integrate the many variables that a data center must serve.

"Think about this as a Rubik's cube," explains Nelson. "On one side it’s performance.You have cost on the other side. You’re going to know cost per transaction. The third dimension is environmental impact. The fourth dimension is revenue; how much revenue is generated per transaction. There’s a balance needed - you can solve one side fairly easily, but solving all four sides is the goal and the true value."

During his presentation, Nelson shared some key metrics on eBay's data center operations. The auction giant has 52,075 servers consuming 18 megawatts of power to support 112.3 million active users.  That equates to revenue of $54 per user, and $117,000 per server.

The development of DSE began three years ago, when the company was looking to unify the view of the business, the infrastructure, and assess it's impact in terms of energy, cost and environment. DSE is a dashboard for the company’s technical ecosystem – the data centers, compute equipment and software that combine to deliver its digital services to consumers.

An MPG Rating for Data Centers

"Much like a dashboard in a car, DSE offers a straightforward approach to measuring the overall performance of technical infrastructure across four key business priorities: performance, cost, environmental impact, and revenue,” said Nelson. Drawing a parallel to the Miles Per Gallon (MPG) measurement for cars, Nelson argues that DSE enables a view into how a company’s “engine” performed with real customer consumption, how the car performed as it was being driven, or in eBay’s case, how the eBay.com engine ran while its users drove it.

"This is what is being consumed, this is how our customers are driving our car," he said.

Nelson, who has been with eBay since 2009 after working for many years at Sun Microsystems, said DSE is just one sign of a larger change of innovation and information sharing sweeping the data center industry.

"In just the past four years, I’ve witnessed a significant change in the growth and importance of data centers, and the way we, as an industry, measure their efficiency," said Nelson. "The PUE standard for data center efficiency has brought immeasurable benefit to the industry, however it’s only one piece of a larger puzzle that transcends data centers and energy efficiency.

“Technology decisions are inextricably linked to business performance,” said Nelson. “The DSE dashboard equips decision-makers to see the results of their technical infrastructure choices to date, as well as acts as a flexible tool for making future decisions - what knobs to turn to achieve maximum performance across all dimensions.

Nelson continued: “We can see more clearly now than ever before that our designs, purchases and operating decisions have real, tangible effects on the key indicators important to running a business: cost, performance, environmental impact and, ultimately, revenue. If we believe this to be true – and I certainly do – then the choices we make regarding our technical infrastructure can no longer be made in a piecemeal, isolated, component-by-component manner that ignores the larger context of the decision. And yet the way we analyze and optimize the efficiency of our technical infrastructure – our very ability to measure our value to business leaders and stakeholders – hasn't, until now, connected these indicators in a meaningful way.”

At eBay.com, $2 Million in Savings

eBay has combined all of its customer requests into two distinct services: buy and sell. DSE measures how many business transactions are completed per kilowatt-hour of electric power consumed for these services, how much energy is consumed to deliver each transaction. Transactions divided by kilowatt-hours reveals the performance of each service. Once these two variables are established, a family of interconnected metrics can be derived to provide further insights for optimizations: for example, the cost per transaction, tons of CO2e generated per transaction and revenue created per transaction.

“With this information, we’re able to see and do things that we simply weren’t equipped to do before,” said Nelson. “For example, by using the DSE dashboard, some of our software engineers saw that by slightly decreasing the memory allocated for an application in a pool of servers, they could remove 400 servers from the pool. This decreased nearly a megawatt of power consumption and helped us avoid spending over $2 million to refresh the servers. This simple software tweak helped us lower power consumption, decrease costs, and increase system performance, ultimately increasing our revenue per transaction. And that’s just one example.”

“Thinking bigger picture and longer-term, DSE is enabling us to project forward and build tangible plans for what we as a business need to do today to realize the results we’re looking to achieve tomorrow,” said Nelson.

“Our intent by releasing DSE, and our corresponding data, is to establish a baseline for 2012 and then set productivity and efficiency goals for 2013,” said Nelson. eBay's goals for the year ahead:

eBay will be updating and publicly reporting all the numbers in the dashboard and its progress on improvement goals each quarter. eBay encourages other companies to explore DSE methodology and see how it can expose business value and performance of their own technical infrastructure. The company has also released a paper describing its DSE methodology.