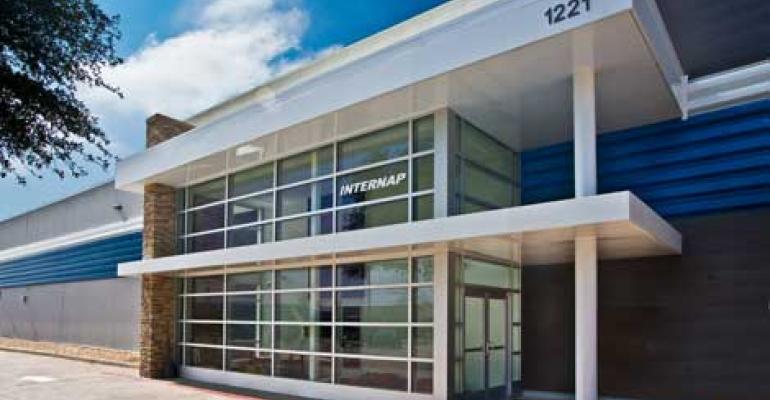 A strong finish to the year and the "cloudy colo" concept indicates Internap has really found its identity. The company's shares increased 11 percent in the two trading sessions since its earnings release.

The exterior of an Internap data center. The company's shares have gained in recent days on the strength of fourth-quarter earnings. (Photo: Internap)

Shares of Internap have surged after the company recorded a strong quarter, indicating it is striking the right chords with its diverse portfolio of colocation, managed services and cloud. The company has also been touting what it calls "Cloudy Colo," a true hybrid solution available through a single portal. The strong finish to the year and the cloudy colo concept are signs that Internap has found its identity.

In two trading sessions since the release of its fourth quarter earnings, shares of Internap have gained 11.5 percent, rising from $7.91 at Thursday to a close of $8.81 on Monday. The fourth quarter saw the highest quarterly revenue, segment profit and adjusted EBITDA in company history.

Revenue for 2012 was $273.6 million, with fourth quarter revenue of $69.7 million. Internap's revenue was up 2 percent from the previous quarter. The high growth was attributed to its data center services segment, which includes Voxel which Internap acquired in 2011. Data center services revenue hit $43.7 million, up 24 percent compared to same time last year, and up four percent from the third quarter. For the full year, data center services generated revenue of $167.3 million, up 25 percent over last year. IP services was flat, but slightly down year over year. Customer churn was down. The company counted 3,700 customers as of December 31, 2012.

“We are pleased with the strong finish to 2012," said Eric Cooney, President and Chief Executive Officer of Internap. "The continued execution of our growth strategy is reflected in full year revenue and Adjusted EBITDA growth of 12 percent and 20 percent, respectively. Successful integration of the Voxel business and focus on our organic colocation, hosting and cloud infrastructure businesses have delivered full-year growth in data center services revenue of 25 percent.

“As we look forward to 2013, the priority is simple – focus on continued execution of the strategy to deliver a platform of high-performance, hybridized IT Infrastructure services," Cooney continued. "We remain confident that the opportunity for long-term profitable growth and stockholder value creation is significant in the market for outsourced IT Infrastructure services.”

Internap has shifted its focus over the years. The company was founded in 1996 on its expertise in IP services and route optimization. It later added colocation and content delivery services, but has had its stumbles, most notably the 2006 acquisition of VitalStream, which led to a $99 million write-off amid customer support problems. Cooney became CEO in 2009, and immediately focused on the company's colocation business. Since Internap was realizing higher margins on its company-owned data centers, it began phasing out its use of third-party space and building data center space. The company rolled out 26,000 square feet of company-controlled data center space in 2012.

The company is working on what it informally calls "Cloudy Colo." It is an extension of its core data center OS platform, with some customers using the beta version.

"Our whole goal is to redefine what the limitations around colo are,” said Raj Dutt, Senior VP of Technology at Internap and former CEO of Voxel. "We’re going to start giving visibility and control into the obvious things that people don’t get from colo – reboot, bandwidth, inventory management asset management, the ability to hybridize managed cloud in the same portal.

"Through software – DCIM-like software – customers can focus at stuff in the rack rather than outside of the rack," said Dutt. "DCIM has barely started in terms of inside the rack. The roles of machines are changing, and DCIM falls short on this. This is where it starts to get interesting."

Offering up a variety of services through one portal from colo to cloud, as well as giving DCIM-like insight into total infrastructure, will aide Internap in cross-selling its services.

"This makes colo great for colo customers," said Dutt. "It also makes colo within reach for cloud guys. As cloud customers need colo, it’s an easier way to go about that. From an infrastructure standpoint, we don’t think the cloud is the be-all and end-all," he said. "If you’re deploying any application, the best solution is a hybrid situation."

Dutt noted that Internap offers everything from colocation to dedicated servers to cloud. "Very few people offering all of these product sets as one infrastructure fabric," he noted.

Dutt believes the economics of cloud are often misinterpreted, and cloud is not always the most cost-effective approach for the customer. "I’d rather sell 100 racks of cloud than 100 racks of colo any day," said Dutt, stating that the margins for providers are simply better for cloud within the same footprint.

Dutt atttributes Internap’s success with its diverse portfolio to one thing. "The market certainly got more educated," he said. "More and more people are treating infrastructure as a competitive weapon more than cost center.”

It’s still early, so there’s no formal “cloudy colo” product yet. The company is evaluating different models. However, all indications are that Internap is working on giving customers deeper control and analytics across the portfolio, from colo to cloud, with deeper DCIM-like functionality. A formal announcement is most likely coming within the next quarter.