$1.5 Billion Iowa Project is Still Alive. Is it Apple?

The mysterious $1.5 billion project known as Project Catapult is apparently back in play in Iowa. Local officials aren't identifying the mystery company, but an intriguing clue has emerged from documents suggesting the project will use solar power and fuel cells. 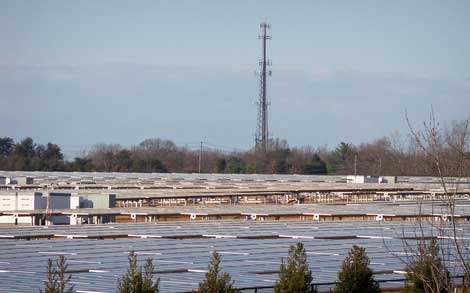 This huge array of solar panels supports the Apple data center in Maiden, North Carolina. A new mystery project in Iowa will likely include both solar power and fuel cells, an unusual paring first seen at Apple in Maiden. (Photo: Rich Miller)

The mysterious $1.5 billion project known as Project Catapult is apparently back in play. Local officials in Altoona, Iowa this week revived a site plan for the project, which has been shrouded in secrecy as a large company has scouted sites in both Iowa and Nebraska.

Who is the company behind the project? Local officials aren't saying. But an intriguing clue has emerged from documents supporting the Altoona project. One of the proposed zoning amendments would allow the operator of the data center to use on-site generation from solar panels, fuel cells and wind energy.

The unnamed company, operating in Iowa as Project Catapult, has an option on land in Altoona and has submitted site plans to local officials showing phased construction of three data centers, each between 350,000 and 380,000 square feet in size. The site plan was originally approved last June, but there were few signs of activity over the summer. The mystery company made site visits to Altoona in both September and October, and by November officials in Altoona were working on "fine details” to finalize a deal.

The company has also scouted sites in Nebraska, where officials are using a codename of Project Edge. Nebraska's leading candidate has appeared to be Kearney, Nebraska, where local officials were confident enough about their chances that in late March the city council approved spending $1.7 million to acquire land for the project.

Narrowing the Field of Suspects

As we've previously noted, the field of prospects is narrowed by the scope of the project and the the fact that three of the huge companies best known for secretive site selections – Google, Microsoft and Yahoo – already operate major data centers in either Iowa or Nebraska. Possible candidates include Apple or Facebook, neither of which has a major data center presence in the middle of the country. There's also a chance - albeit a smaller one - that the mystery company could be a financial services company or other enterprise.

Much of the speculation has focused on Facebook, as the multi-building site plan submitted in Altoona is similar to the site plans for Facebook’s project in Oregon and North Carolina. But a growing number of companies are now pursuing multi-facility campuses.

The potential use of solar arrays and fuel cells in Altoona moves Apple up the list of suspects. Apple has deployed two large solar arrays to support its Maiden facility, generating up to 20 megawatts of electricity. Apple has also announced plans to deploy a 5 megawatt fuel cell facility, featuring Bloom Energy Servers powered by methane from landfills, which will be transported via a natural gas pipeline system.

eBay is using Bloom boxes to support the newest phase of its data center project in Utah, where it is employing a new power infrastructure that eliminates traditional uninterruptible power supply (UPS) units and backup generators. Bloom fuel cells will provide primary power, while eBay will use the utility grid as its backup power source. The Utah campus also features a solar array, which is significantly smaller in scope than the massive Apple solar project. It's worth noting that eBay has largely abandoned the secrecy around its data center projects, sponsoring open design RFPs for the first two phases of the Utah project.

A growing number of data center operators are installing solar arrays to add a solar power, but fuel cells are rarely used in data centers due to their cost - which would make them an unlikely fit for a cost-conscious operator like Facebook or Google.

When will the identity of Project Catapult be known? This project first began making headlines a year ago. The renewed activity in Altoona suggests there might be an answer soon.