Microsoft has provided a first public glimpse of its new data center design,which features pre-fabricated modules housing thousands of servers, including some that sit outdoors. 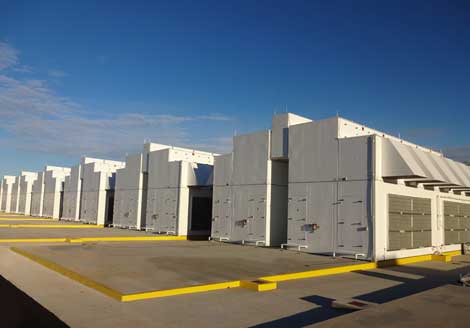 Some of the data center modules at Microsoft's campus in Boydton, Virginia are housed outdoors, with no roof. These modules, known as IT-PACs, house thousands of servers to support Microsoft's fast-growing cloud computing operation. (Photo: Microsoft)

With its latest expansion, Microsoft's investment in its data center campus in southern Virginia has reached $997 million - and that's minus the cost of a roof.

The Microsoft campus in Boydton, Va. will expand to include two more data center facilities, the company said yesterday. Microsoft also provided a first public glimpse of its new  data center design, which features pre-fabricated modules housing thousands of servers, some of which sit on a slab, open to the sky and the outdoors.

The Virginia facility marks the latest evolution of Microsoft’s modular approach, which has transformed the company's Internet infrastructure and its supply chain, allowing for faster and cheaper deployment of cloud capacity. Microsoft has also pushed the boundaries of data center design, abandoning chillers and data halls - and in some cases, even roofs.

Microsoft now builds much of its data center equipment in factories, and ships the components to its data center campuses, where they are assembled on-site. This focus on PACs (Pre-Assembled Components) allows Microsoft to standardize many elements of its IT and power infrastructure.

A Module for All Seasons

The key driver in this model are IT-PACs, container-like modular data centers that are designed to operate in all environments, and employ a free cooling approach in which fresh air is drawn into the enclosure through louvers in the side of the container – which effectively functions as a huge air handler with racks of servers inside.

In Virginia, these IT-PACs can operate outdoors, realizing a vision put forth by Christian Belady, general manager of Microsoft Data Center Services. Back in 2008, Belady and his Microsoft colleague Sean James put a rack of servers in a pup tent for eight months, with 100 percent uptime. That experiment helped the data center industry rethink assumptions about the impact of temperature and humidity on server health.

When Microsoft first developed the IT-PAC modular deployment model, it considered building data centers with no roofs, but ultimately opted for a lightweight building to house the modules. But Belady remained intrigued by the roof-less data center, as noted in an interview with Data Center Knowledge in 2011, while the Virginia campus was under construction.

That vision has been realized in the latest phases at the Boydton campus, which also houses more traditional data center space. Microsoft has built out the first two phases of the campus, which it describes as "316,300 square feet and growing." Parts of the campus feature modules housed under pre-manufactured metal buildings, similar to a design the company used in Quincy, Washington.  In other parts, the IT-PAC modules are housed outside.

The climate in Virginia is warmer than previous sites where Microsoft has deployed modules - including Chicago, Dublin and Quincy. The IT-PACs use an adiabatic cooling system in which warm outside air enters the enclosure and passes through a layer of media, which is dampened by a small flow of water. The air is cooled as it passes through the wet media. Microsoft says this approach allows it to keep servers cool while using just 1 percent of the water consumed in a traditional data center.

The Boydton facility, which opened in February 2012, operates with a Power Usage Effectiveness (PUE) rating between 1.13 to 1.2 at peak usage.

Yesterday Microsoft said it will invest an additional $348 million to built two more phases to the Virginia facility, bringing its total investment to $997 million. Thus far Apple has been the only company to announce a $1 billion pricetag for a single data center campus. But as companies build out larger campuses for their cloud computing infrastructure, it is changing the math for Internet infrastructure investment.