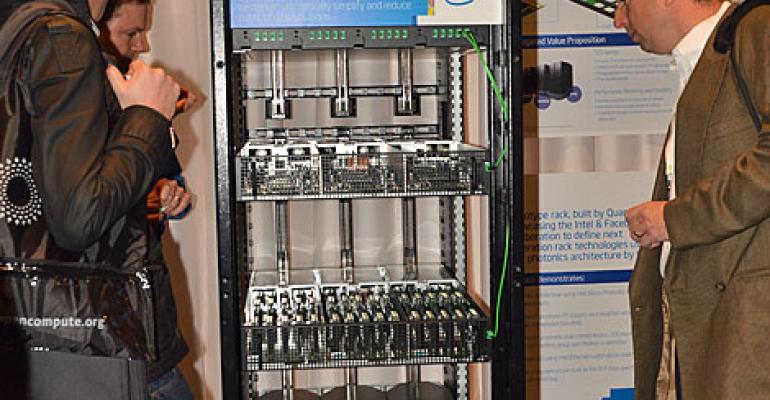 Multiple innovative products were unveiled at the show including this rack design. Quanta partnered with Intel in producing this Open Compute Project compliant rack (prototype shown) which will use silicon photonics. This ultra-low latency technology will increase the speed at which components in the rack can speak to each other. The forthcoming silicon photonics technology will enable 100 Gbps interconnects, which is enough bandwidth to serve multiple processor generations. This technology could allow components that previously needed to be bound to the same motherboard to be spread out within a rack.
Design>Hardware

<img src="/sites/datacenterknowledge.com/files/wp-content/uploads/2013/01/Quanta-Intel-Rack-2.jpg" width="470" height="515" /> Intel has developed a prototype of a "photonic rack" with high-speed connections that allow new approaches to server design that separate components like CPUs and storage, allowing them to be upgraded independently. Here's a video overview. 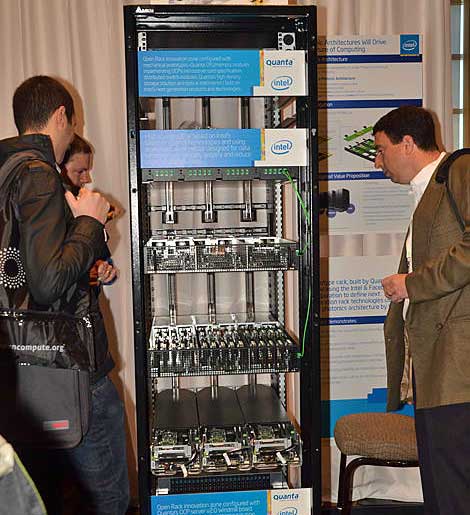 Open Compute Project compliant rack (prototype shown) which will use silicon photonics. This ultra-low latency technology will increase the speed at which components in the rack can speak to each other  allow components that previously needed to be bound to the same motherboard to be spread out within a rack. (Photo: Colleen Miller)

Last June, Open Compute Project Chairman Frank Frankosvky outlined an ambitious vision to separate the technology refresh cycle for CPUs from the surrounding equipment in a rack. Frankovsky, also a hardware executive at Facebook, said the ability to easily swap out processors could transform the way chips are procured at scale, perhaps shifting to a subscription model.

But what would be required to make this work? One answer emerged at last week's Open Compute Summit: silicon photonics. Intel has been working on the technology for a decade, and is now collaborating with Facebook on a prototype for a new rack architecture that can "disaggregate" the server, taking components that previously needed to be bound to the same motherboard and spreading them out within a rack.

Silicon photonics uses light (photons) to move huge amounts of data at very high speeds over a thin optical fiber rather than using electrical signals over a copper cable. Intel's prototype can move data at up to 100 gigabits per second (Gbps), a speed that allows components to work together even when they're not in close proximity to one another.

This creates intriguing possibilities in server and rack design. At the Open Compute Summit, Intel showed off a photonic rack built by Quanta, which separated components into their own server trays - one tray for Xeon CPUs and another for its latest Atom CPUs, another for storage. When a new generation of CPUs is available, users can swap out a the CPU tray rather than waiting for an entire new server and motherboard design.

"We're excited about the flexibility that these technologies can bring to hardware and how silicon photonics will enable us to interconnect these resources with less concern about their physical placement," said Frank Frankovsky, chairman of the Open Compute Foundation and vice president of hardware design at supply chain at Facebook

At Open Compute, Intel's Jeff Demain of Intel provided DCK with an overview of silicon photonics, and its potential to transform data center design and operations. This video runs about 7 minutes.