Google will invest another $600 million on data center construction in South Carolina,where it will expand its operations at the Mt. Holly Commerce Park in Berkeley County. 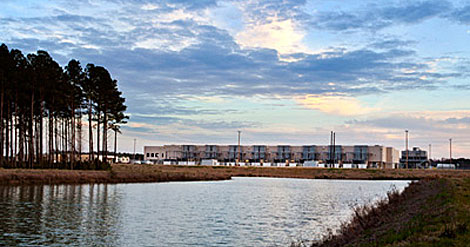 The pond on Google's data center complex in Berkeley County, SC, where the company has committed to another $600 million investment in its data center campus. ( Photo: Connie Zhou for Google)

Google is dropping another $600 million on data center construction, and South Carolina is very happy about it. The company held a  groundbreaking ceremony in Berkeley County, S.C. this morning to announce that Google will expand its operations at the Mt. Holly Commerce Park in Berkeley County. The additional $600 million in investment at the site brings Google’s total investment at the site to over $1.2 billion.

The data center in Berkeley County houses thousands of servers to support services such as Google search, Gmail, Google+ and YouTube. As demand for Google’s services grows, the company must ramp up data center to meet this demand.

“Today’s announcement is another big win for South Carolina,” said Governer Nikki Haley in a release. “We celebrate Google’s decision to grow its footprint in Berkeley County with a $600 million investment. When a world-class company like Google decides to expand in the Palmetto State, it shows we are providing the sort of business environment that helps foster success.”

A lot of states aggressively pursue data center business through various tax incentives because data centers are oftentimes a boon for the local economy.

“South Carolina and the Berkeley County community are great places in which to work and grow,” said Data Center Operations Manager Eric Wages. “When Google first announced plans to come to Berkeley County in 2007, we were attracted to not only the energy infrastructure, developable land and available workforce, but also the extraordinary team from the local community that made us feel welcome. Today’s announcement is just a continuation of our investment in the state. Google is proud to call Berkeley County home.”

Google first announced plans for a South Carolina data center in 2007, making an initial investment of $600 million to get the center up and running. In November 2010, Google announced plans to construct a second building at the site, which is now serving traffic.

The boon to South Carolina extends beyond data centers. Google is also involved in supporting science and mathematics programs in local schools. Since 2008, it has awarded more than $885,000 in grants to local schools and nonprofits. It also has helped implement a free, downtown Wi-Fi network in Goose Creek.

Investing in the Community

“Google has been a great partner, exceeding expectations when the data center was first proposed,” said Berkeley County Supervisor Dan Davis. “They have invested capital, created good jobs and more importantly partnered with local businesses to help them do business better.”

"When our community came together to develop this business park, we wanted to attract leading companies that would establish deep roots and grow," said S.C. Sen. Paul Campbell. "Google's expansion is an example of how Berkeley County can serve the needs of the world's most innovative and dynamic companies. I hope Google's growth here prompts other growing businesses to put down roots here."

Google spends a lot on infrastructure. This is an understatement.  Here was a look at Google’s spending up to Q3 2012. Google also recently announced it was investing in more wind power in Iowa as well as is investing $300 million in expanding its data center operations there. Total investment blew past 1 Billion in infrastructure in Iowa.  The company also doubled the size of its Pryor, Oklahoma facility in April 2012. This is all news from roughly a year, mind you. DCK attempted to provide a FAQ about Google data centers last May.