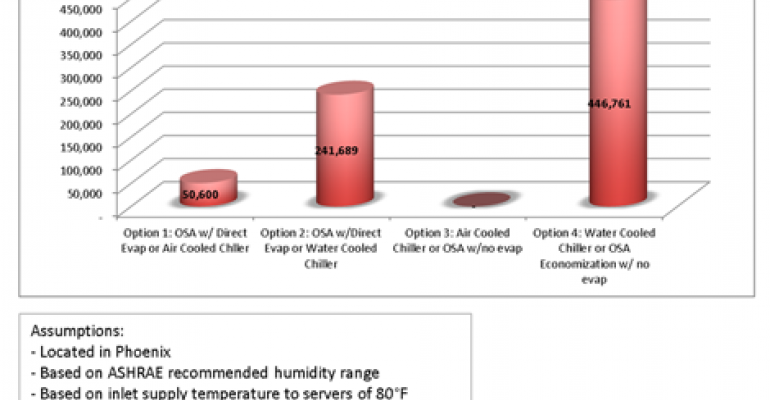 As water conservation in the data center becomes more important, there are cooling technologies that are proven to reduce the consumption of water, as well as ways to seek alternative sources of water for data center cooling, writes Ron Voukun of Gray Construction.

Ron Vokoun is Mission Critical Market Leader, Western Region, at JE Dunn Construction. Ron was previously Director of Mission Critical for Gray Construction and also served in leadership roles with Qwest Communications and Aerie Networks. You can find him on Twitter at @RonVokoun.

“Water is the new oil.” That is a statement made by a “futurist” at a leadership forum I attended back in 2006. It’s an idea made increasingly popular by Steven Solomon in his book “Water: The Epic Struggle for Wealth, Power, and Civilization.” I am not arguing this political position or debating the accuracy of this statement, but rather using it as a starting point for a conversation on water.

Let that statement sink in for a moment though. To compare water to oil is to say that water is rare, of great value, and something that countries are willing to go to war over. If true, it certainly should be given more attention in our data center discussions.

There is a complex relationship between the use of water and energy in the data center, which will be discussed in my next column. For now, I want to focus on cooling technologies that are proven to reduce the consumption of water, and the availability and alternative sources of water for data center cooling, to highlight the sustainable possibilities that exist.

Before diving into the various cooling technologies, it is important to stress that both water and energy consumption can be reduced through the implementation of ASHRAE TC 9.9 for both temperature and humidity. Outside air (OSA) economization should also be a part of any cooling system to take advantage of the free cooling that TC 9.9 enables.

If one focuses purely on reducing water use, technologies such as air-cooled chillers and heat wheels are easy choices that use no water in the cooling process. But if taking a more holistic view, you may pay a premium in the form of increased energy use with these systems.

Evaporative cooling is often assumed to use more water than a traditional water-cooled chiller system, but as is illustrated below, this is not the case, at least in Phoenix. 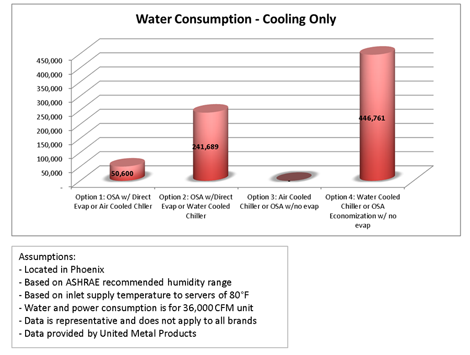 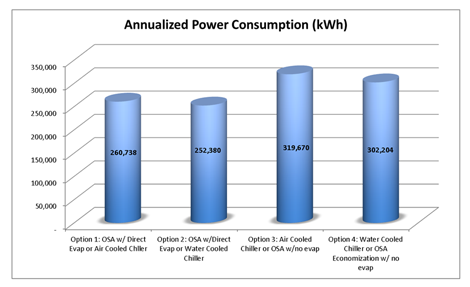 These are just a few of the technologies available to reduce your cooling water use. Now let’s turn our attention to the availability of water.

Availability and Alternate Sources of Water

The availability and cost of water are quickly climbing in priority on the site selection checklist as this critical resource becomes more precious.

There are certain locations where the municipal water systems are being stressed and you will pay accordingly for a high capacity water tap. One such situation occurred in Ashburn, VA when RagingWire tried to obtain a larger water service for its cooling needs. The cost would have been four million dollars, according to a presentation by James Kennedy, director of critical facility engineering for RagingWire, at the Fall 2012 7x24 Exchange conference in Phoenix. They instead turned to reclaimed water for their cooling needs. In most situations, reclaimed water is of a very high quality and can be obtained at a fraction of the cost of potable water.

Researching alternate water sources may not only save you on initial and operating costs, but it may also provide the ability to operate independently from municipal water sources. There are instances such as Google’s data center in Hamina, Finland where they use seawater for cooling. There are locations in Nebraska where irrigation wells are available to provide up to 1,500 gallons per minute of water at 56⁰F. These are just a couple of examples where the alternate source of water not only provides independence from a municipality, but the water temperature enables the reduction or elimination of certain pieces of cooling equipment most data centers would require, thereby saving a great deal of energy.

As data centers come under increasing scrutiny for using potable water for cooling purposes, securing a reliable source of water will become more important moving forward and the value of alternate sources of water will only increase. The examples discussed illustrate the complex relationship between energy, water, and sustainability. In my next column, I will discuss this relationship, as well as Water Usage Effectiveness (WUE) and data center hydro-footprint.