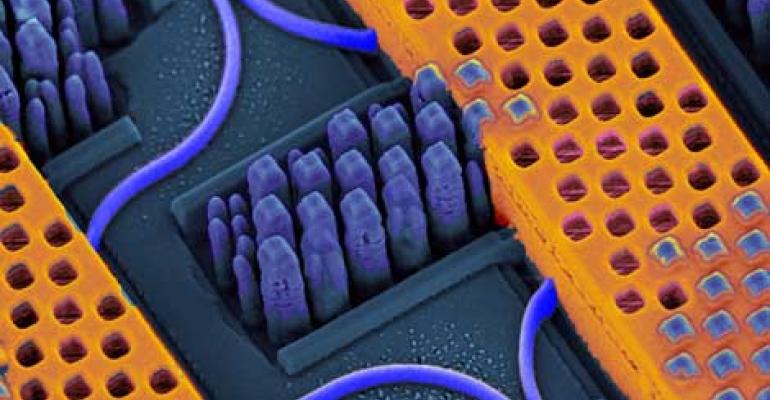 <img src="/sites/datacenterknowledge.com/files/wp-content/uploads/2012/12/ibm-nanphotonics-2.jpg" alt="" width="470" height="366" /> IBM has announced a major advance in the ability to use light instead of electrical signals to transmit information for future computing. Referred to as Silicon Nanophotonics, the technology allows the integration of different optical components side by side with electrical circuits on a single silicon chip. 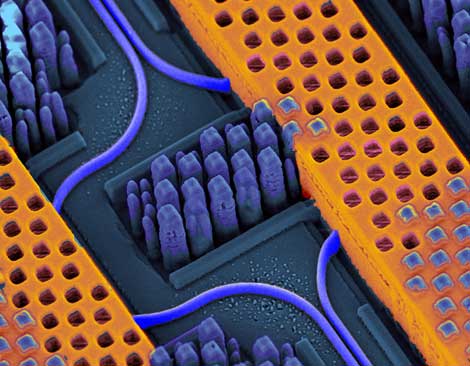 IBM announced a major advance in the ability to use light instead of electrical signals to transmit information for future computing. Referred to as Silicon Nanophotonics, the technology allows the integration of different optical components side by side with electrical circuits on a single silicon chip, using sub-100 nanometer semiconductor technology.

Big, Fast Data - Without an Interconnect

The technology uses pulses of light for communication and creates a "super highway" for large volumes of data to be exchanged at high speeds between computer chips in servers.  This alleviates the cost and bottlenecks presented by traditional interconnect technology. The research has potential ramifications for the cost and speed of future data center networks, and potential implications for design as well.

Silicon Nanophotonics could provide answers to big data challenges by seamlessly connecting various parts of large systems, whether few centimeters or few kilometers apart from each other, and move terabytes of data via pulses of light through optical fibers.

“This technology breakthrough is a result of more than a decade of pioneering research at IBM,” said Dr. John Kelly, Senior Vice President and Director of IBM Research. “This allows us to move silicon nanophotonics technology into a real-world manufacturing environment that will have impact across a range of applications.”

The challenge of manufacturing these chips was addressed by adding a few processing modules into a high-performance 90nm CMOS fabrication line.  A variety of silicon nanophotonics components, such as wavelength division multiplexers (WDM), modulators, and detectors are integrated side-by-side with a CMOS electrical circuitry. As a result, single-chip optical communications transceivers can be manufactured in a conventional semiconductor foundry, providing significant cost reduction over traditional approaches.

IBM’s CMOS nanophotonics technology demonstrates transceivers to exceed the data rate of 25Gbps per channel. In addition, the technology is capable of feeding a number of parallel optical data streams into a single fiber by utilizing compact on-chip wavelength-division multiplexing devices. The ability to multiplex large data streams at high data rates will allow future scaling of optical communications capable of delivering terabytes of data between distant parts of computer systems. 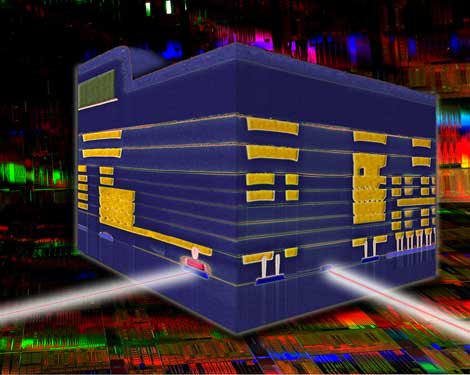 Cross-sectional view of an IBM Silicon Nanophotonics chip combining optical and electrical circuits. An IBM 90nm Silicon Integrated Nanophotonics technology is capable of integrating a photodetector (red feature on the left side of the cube) and modulator (blue feature on the right side) fabricated side-by-side with silicon transistors. Silicon Nanophotonics circuits and silicon transistors are interconnected with nine levels of yellow metal wires. (Image: IBM Research via Flickr)