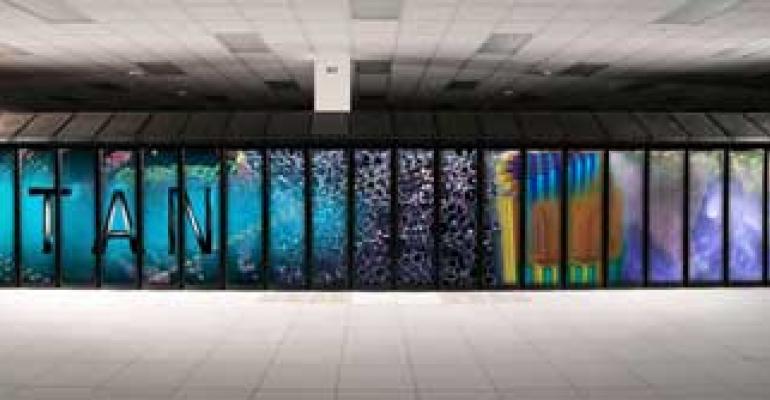 The Titan supercomputer at Oak Ridge National Laboratory (ORNL) has claimed the number one position in the 40th edition of the Top500 list of the world's most powerful supercomputers, with a hybrid system that achieved with 17.59 Petaflop/s.

The Titan supercomputer at Oak Ridge National Laboratory (ORNL) has claimed the number one position in the 40th edition of the Top500 list of the world's most powerful supercomputers, with a hybrid system that achieved with 17.59 Petaflop/s. The ORNL Titan is a Cray XK7 system with 560,640 processors, including 261,632 NVIDIA K20x accelerator cores. Holding several Top500 positions in the past, the Jaguar supercomputer completed its upgrade to Titan earlier this year, striving for 20 Petaflop/s of power.

A year ago the Top500 list of the most powerful supercomputers in the world was all too familiar - not changing much from the previous list. The November 2012 list was released this morning at the SC12 conference, and the top players in supercomputing have resumed the battle, as exascale computing inches closer to reality.

Notable for its absence is the Cray supercomputer Blue Waters at NCSA at the University of Illinois, which achieved petaflop performance on applications, but chose not to submit a Linpack benchmark performance figure.

In seventh place is Stampede, a Dell PowerEdge C8220 system installed at the Texas Advanced Computing Center (TACC).  Using the new Intel Xeon Phi coprocessors, it achieved 2.6 Petaflop/s. The C8220 is a 4U shared infrastructure solution to allow the mixing and matching of compute, GPU/coprocessors and storage sleds in a single chassis. Stampede is a collaborative effort for TACC, with partners Dell and Intel.

More Use of Coprocessors, Accelerators

Just four and a half years after the first Petaflop/s system appeared on the Top500 list, there are now 23 systems at one Petaflop/s or greater. Use of co-processors and accelerators has increased, with 62 systems on the list now making use of them. Titan and Tianhe-1A systems use NVIDIA GPUs and Stampede and six others use Intel Xeon Phi coprocessors. Use of Infiniband interconnect technology also continues to rise, with 226 systems using it, up from 209 on the last list. Intel holds the largest share of processors in the Top500 with 76 percent, followed by AMD with 12 percent and IBM power processors with 10.6 percent.

The Top500 list was announced at the 2012 International conference for High Performance Computing, SC12,  being held in snowy Salt Lake City, Utah. The SC12 conversation can be followed on its Facebook page, or Twitter hashtag #SC12.