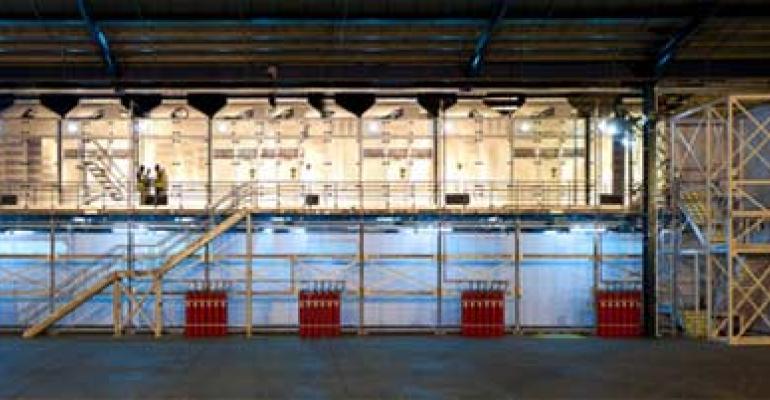 With the latest incarnation of its modular design, UK-based IT provider Colt is promising to future proof the data center by using modular components to enable customers to scale up or down in their use of power, cooling and space using 3 different sized modules.

Another view of the a data center built by Colt using its new modular design.

With the latest incarnation of its modular design, UK-based IT provider Colt is promising to future proof the data center by taking the concept of modularity to another level. In Colt's new ftec offering, power, cooling and space are able to individually scale up or down using 3 different sized modules.

"The big difference with this next incarnation of ftec is the ability to dynamically change the capacity within the lifetime in the data center, while reducing the risks, because it goes outside the IT space itself, done without any downtime," said Ian Dixon,  Deputy Vice President Operations of Colt Data Centre Services.

Ftec uses a standardized, reusable design that can deliver excellent energy efficiency, with a projected Power Usage Effectiveness (PUE)  as low as 1.21. Colt introduced its modular offering in 2010, offering more than 120 design variations and the ability to deliver modules to either a Colt facility or customer-owned site. The company says it has a consistent track record in the delivery of these within 4 months.

With ftec - with the "f" emphasizing the flexibility of the product - Colt has introduced features to further reduce risk and deploy capacity efficiently, particularly when the data center is in low load. It takes a long time for a data center to be running at full capacity, so the ease of expansion in Colt’s ftec ensures efficiency as the data center builds up to that point.

Colt says it has listened to the CIO/CTO and/or IT director, as well as the CFO here, bringing 3 new feature sets with increased modularity on a granular level for power, cooling and space. This enables the dynamic scaling up and down of individual systems—power, space and cooling —without data center downtime. All three are being delivered in a modular fashion, through plug-in capability.

Colt Power Flex:  This gives the ability to provide 500w, 1000w, 2000w m2 or 3k watts per meter squared on day one, with the option to dynamically increase or decrease by using plug in capability that makes it easier to scale up (or down, for that matter) in smaller installments. “Customers are looking at something that can be implemented in a matter of weeks rather months," said Dixon. "You can now match capacity to the load in the data center. You can match the power slide to the IT load. Higher efficiency, higher levels of PUE whilst the data center is still partially full.”

Colt CoolFlex: CoolFlex is the distributed cooling architecture, using multiple downflow units and fresh air. Colt Cool enables them to deliver all of that as a plug in option. You can install the additional chiller replacement or enhancement with ease as the data center requires, Colt says. “Each one of those projects are like open heart surgery on the data center,” says Dixon. “For example, on one site, we tried to buy matching chillers, but ended up with different controllers, and had to work with manufacturer to get it to work. This is the ability to plug in without it being a major project.”

Colt SpaceFlex: With SpaceFlex, Colt capitalizes on the flexibility of its existing design. It offers multiple sizes; Colt can deliver in size increments in either double story or single story. It can also deliver modules to operate in the carhop (that’s parking lot for Americans) if a customer runs out of space in the data center.

Ftec has emerged from a blend of feedback Colt has picked up from customers, including input from the CIO/CTO/IT manager and the CFO. The first part of the feedback is really from the IT director or CIO/CTO.

"The tool they’re looking for is a crystal ball; they’re looking at 10-15 year horizon for the data center and very often, he/she doesn’t have a clue what will be deployed in 5 years,” said Ian.  "Will power density go up because of blades? It could be larger amounts of storage. An IT director being asked to specify a design, they know today, probably in 3 years, but after that?" Increased flexibility means the data center can evolve for the future without the usual growing pains, Dixon added.

The second source of feedback was the CFO, who Dixon described as "definitely a major player, perhaps even more so in the purchase. They’re looking to clearly reduce expenditure, financial commitment and ongoing costs. It’s trying to address those two needs in how they do it,” says Dixon.

“The extra enhancements here are elements around the modularity, and using those capabilities to more dynamically vary the loads within an existing data hall," said Dixon. "Less (density) in one part of the hall with lower requirements, more in one part. To have cooling units of varying sizes, for example, brings the ability to have more flexibility.” In short, this is added granularity to modularity.