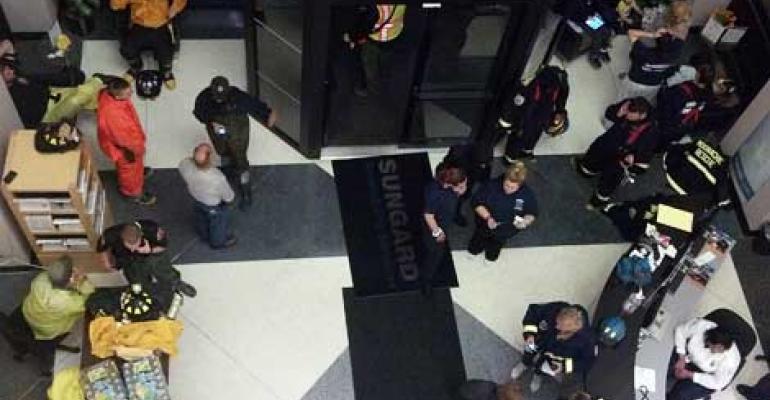 Members of the Moonachie, N.J. police and fire departments and emergency medical units gather in the lobby of a business continuity center operated by SunGard Availability Services in nearby Carlstadt in the early morning hours of Oct. 30 during Hurricane Sandy. The hurricane caused a storm surge in the Hackensack River that flooded Moonachie and forced the community&#8217;s first responders to set up an emergency command post at the SunGard site because it was the only location that was not flooded. (Photo: SunGard Availability Services)
Manage

When SuperStorm Sandy struck, the SunGard business continuity center in Carlstadt, N.J. opened its doors and served as a refuge for more than 100 residents flooded out of their homes in nearby Moonachie, offering food, shelter and medical attention. 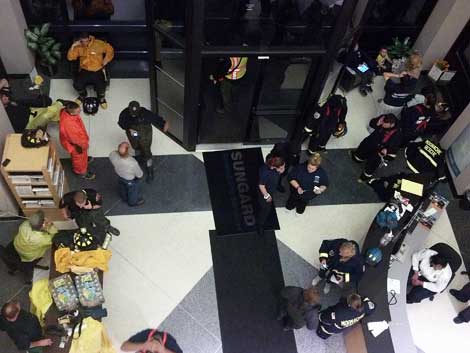 As the rescue truck slowly made its way through waist-deep water flooding the darkened streets of her town, MaryEllen Lyons was cold and wet and confused. Lyons,  the Superintendent of Public Works in Moonachie, New Jersey, had just waded through shoulder-high water to escape the town's municipal building, which was underwater.

As Lyons took stock of the epic disaster unfolding in her community, the truck stopped several times to pick up evacuees before it approached higher ground and its destination - a brightly-lit SunGard Availability Services business continuity center in nearby Carlstadt.

"It was like a beacon of light on a very dark night," said Lyons.

Disaster recovery data centers are designed to be strongholds, offering a secure home for corporate data and staff, set apart from any disaster. But when SuperStorm Sandy struck on the night of Oct. 29, the disaster came to the neighborhood surrounding the SunGard Carlstadt facility. As the flood waters rose at an alarming rate, the center opened its doors and served as a refuge for more than 100 residents forced from their homes, who received food, shelter and medical attention.

The data center also became an impromptu command center for local officials. With the mayor trapped in his home by flood waters, municipal staff at the SunGard facility regrouped to mount a recovery effort for a flood that took the town by surprise.

Moonachie is a town of 2,700 residents, located 15 miles west of New York City. Most of Moonachie is below sea level, so as Sandy approached, officials were prepared for rain-driven flooding in low-lying areas on the south end of the 1.6-square-mile town. Instead, the huge storm surge from Sandy overwhelmed a dam on the Hackensack River, filling the streets of  Moonachie and nearby Little Ferry with 4 to 5 feet of water.

Lyons was still at the Moonachie municipal building when the phones started ringing.  "We started getting reports of water coming into the north part of town," she said. "The municipal building began to flood, and the water was rising so fast that we needed big help. The mayor couldn't get out of his house.

"The water just kept rising," Lyons continued. "It was so incredibly fast.  We abandoned the police department, transferred all 911 calls to the county OEM, and took refuge in the courtroom, because the judge's bench was elevated."

A handful of residents who had sought shelter at the municipal building had to be evacuated by boat. Then a large truck came for Lyons and remaining staff.

"The water was up to my chest, and it was a very swift current," she said. "Everyone was cold and wet and terrified."

The SunGard facility in Carlstadt was one of the few buildings in the area that was dry and had power, provided by 8 two-megawatt diesel generators. Like most data centers, the SunGard facility has raised-floor data center space to house servers and storage. But because of its focus on disaster recovery, the 326,000 square foot SunGard facility also features 19 conference rooms and customer lounges, providing workspaces for enterprise clients dealing with the loss of primary facilities.

"They set up a room for our emergency team," said Lyons, who was effusive in her appreciation for the SunGard staff. "We needed medical supplies, and the SunGard employees got it for us.

"Families were able to gather around a table together," said Lyons. "That's so important when you're cold and scared."

Many residents spent the night in the SunGard facility. By 3:30 p.m. the following day, the evacuees had been relocated to shelters, and the Moonachie government, police and emergency services shifted their operations to SecureWatch24, a local security firm with a command center in Moonachie. Lyons says it looks like it may be a lengthy stay.

"Every public building in our town is uninhabitable," she said.