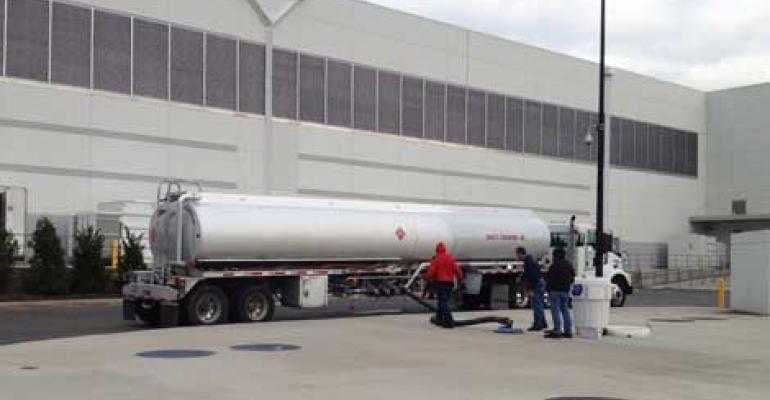 As SuperStorm Sandy brought destruction and death to the East Coast, data centers in New York and New Jersey faced extraordinary challenges. Here's a look back at the storm and its aftermath. 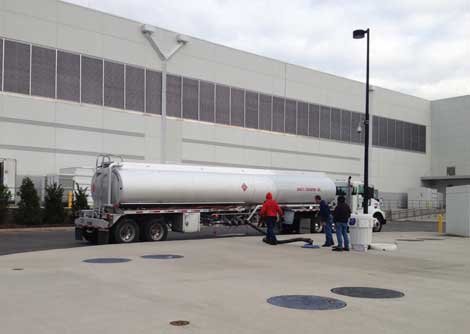 A diesel delivery truck tops off the tanks at DuPont Fabros' NJ1 data center Friday afternoon. The huge facility in Piscataway was one of multiple data centers that successfully operated on generator power during utility outages this week. (Photo: DuPont Fabros)

As SuperStorm Sandy brought destruction and death to the East Coast, data centers in New York and New Jersey faced extraordinary challenges. Here's a look back at the storm and its aftermath, as chronicled in our coverage at Data Center Knowledge.

Generator Delivery Boosts Hopes at Datagram - For the staff and customers of hosting provider Datagram, the cavalry finally arrived shortly after 2 p.m. Friday, in the form of a 2-megawatt diesel generator on the back of an 18-wheeler. The huge engine, which slowly made its way through the storm-battered streets of lower Manhattan to a data center at 33 Whitehall, represents the best hope for fully restoring the web sites of Datagram customers, which were knocked off the Internet Monday evening when the record storm surge from SuperStorm Sandy flooded key equipment in the building’s basement.

Temperatures Soar at Data Center Inside 111 8th Avenue - Temperatures inside a Zayo Group data center at 111 8th Avenue in New York City briefly soared past 100 degrees this afternoon as generator problems forced the company to power down its cooling systems. The company has since stabilized the temperature and brought the cooling system back online. Customers remained online throughout the incident, which was the latest in a series of challenges that have confronted New York’s data center community since SuperStorm Sandy smashed the city earlier this week.

Sandy's Impact: The View from the Network - Stepping a little further back than the data center, now it’s time for a broader picture of how the Internet held up during SuperStorm Sandy. Monitoring from Keynote, Renesys and RIPE provided a high-level analysis of how the Internet managed the storm, allowing us to paint a broader picture than the facility outages we’re tracking in our data center coverage.

New York Data Centers Battle Back from Storm Damage - As Thursday dawned on lower Manhattan, the city’s battered data centers continued their recovery efforts. Wednesday was a day of fast-moving events, as some facilities that were down came back online, and some that were up went down. Several of the hardest-hit facilities were hoping to be back in action Thursday, as Con Edison gradually begins to restore power to some neighborhoods below 34th street. Here’s an update of the status of Manhattan data centers affected by SuperStorm Sandy.

Diesel: The Lifeblood of the Recovery Effort - Much of the Internet is currently running on diesel fuel and priority service contracts. Emergency backup generators powered by diesel are helping many East Coast data center providers weather Superstorm Sandy. The importance of diesel in the post-Sandy economy is hard to overstate. In the wake of Sandy, diesel is the lifeblood of lower Manhattan, where generators are currently providing virtually all the area’s electricity.

Diesel 'Bucket Brigade' Keeps Peer 1 Online at 75 Broad - A determined team of employees of Peer 1 Hosting, blog host Squarespace and Fog Creek Software have formed a “bucket brigade” to relay 5-gallon buckets of diesel fuel up 17 flights of stairs at 75 Broad Street to refuel a generator providing emergency power to the Peer 1 data center. It is a decidedly low-tech, brute-force solution to the challenges at 75 Broad, the hobbled data center building in Lower Manhattan.

Generators Keep NJ Data Centers Humming - While data centers in New York were struggling with water damage and utility outages in the wake of Hurricane Sandy, the situation was much better in New Jersey, where many facilities switched to generator power but remained online. Here’s a roundup of how some data center providers in New Jersey fared with Sandy’s disruptive visit.

Massive Flooding Damages Several NYC Data Centers - Flooding from Hurricane Sandy has hobbled two data center buildings in Lower Manhattan, taking out diesel fuel pumps used to refuel generators.A third building at 121 Varick is also reported to be without power. There were also reports of outages for some tenants at a major data hub at 111 8th Avenue, and many other New York area facilities were running on generator power amid widespread utility outages.

Con Edison Shuts Off Power in Lower Manhattan - Several high-traffic web sites are reporting down time due to data center problems in New York facilities, including Gawker, Gizmodo, Mediaite and Buzzfeed. All those sites are hosted by Datagram, which operates a data center at 33 Whitehall Street, which is within the “Zone A” flood zone in lower Manhattan, which is under mandatory evacuation orders.

Major Data Centers in Northeast Brace for Sandy - Major data centers on the East Coast have emergency plans in place, and are preparing to ride out Hurricane Sandy and keep critical communications services online as the powerful storm lays siege to major population centers.