New from Facebook: The royal data center tour. On Oct. 16, King Carl XVI Gustaf of Sweden toured the new Facebook data center in Lulea, which is currently under construction with a planned launch next year.

New from Facebook: The royal data center tour. On Oct. 16, King Carl XVI Gustaf of Sweden toured the new Facebook data center in Lulea, which is currently under construction with a planned launch next year. The king visited the Lulea area with a delegation from The Royal Swedish Academy of Engineering Sciences, and was given an overview of the construction process and a tour of the server hall.

Economic development officials in Sweden have been using the Facebook project to highlight the region's attractiveness as a data center destination. Lulea has already begun to see economic "coattails" from the Facebook data center, as storage vendors EMC and Fusion-io have set up local offices in town, presumably to help support Facebook's needs. The international construction agency NCC has created a special division with expertise for data center construction, based in Lulea.

“This past year with Facebook’s presence has meant a great deal for Sweden and Lulea," says Karl Petersen, Mayor of Lulea. "We are entering a new, digital industrial era, and we expect growth and positive effects to continue.”

The new data center in Lulea will be Facebook’s first facility outside the United States, supporting the rapid global growth of its users. The 27,000 square meter (290,000 square foot) first phase will be completed late this year and begin supporting traffic in the first half of 2013. The location takes advantage of the cool climate in Lulea, a seaside town of 45,000 located at approximately the same latitude as Fairbanks, Alaska. That cool weather will allow Facebook to use outside air to cool the tens of thousands of servers that will occupy the new campus.

Facebook's presence also appears to be boosting The Lulea University of Technology. The school, , located just 750 meters from the new data center, is experiencing an all-time high in applications from students, resulting in the university today having over 17 000 students. Some of the course programs focusing on IT engineering, have even seen the number of applicants double.

“We have been educating data technicians since the early 80s, but right now we are experiencing a previously unseen peak in interest and applications from new students," said Johan Sterte, Vice Chancellor at Lulea University of Technology. "In fact, we are currently the University in Sweden that is seeing the biggest increase in student applications.”

Here's a photo and video from the royal visit: 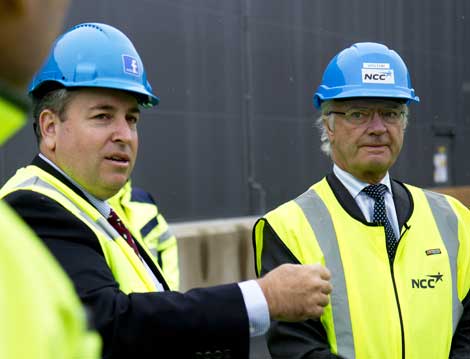