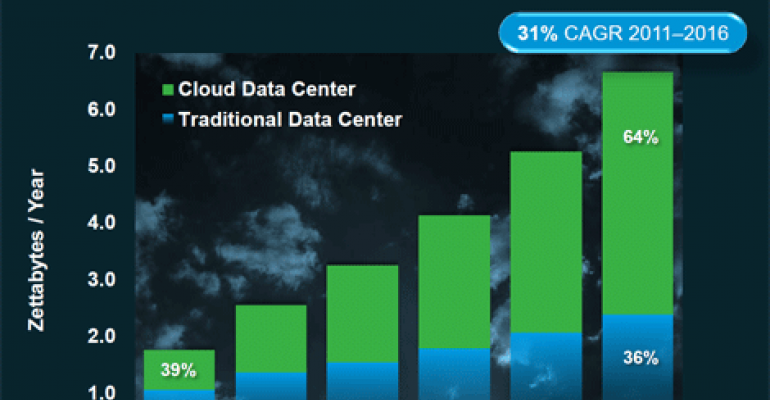 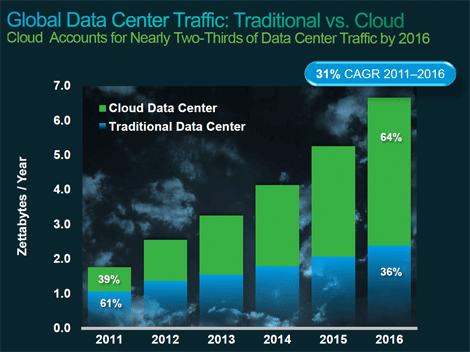 If you need any more proof of the impact of cloud and spectacular growth of Internet traffic, Cisco’s Global Cloud Index should do the trick. The study predicts that global data center traffic will grow 4-fold and reach a total of 6.6 zettabytes annually by 2016. The company predicts global cloud traffic, the fastest growing component of data center traffic, to grow at a 44 percent combined annual growth rate (CAGR), from 683 exabytes annual traffic in 2011 to 4.3 zettabytes by 2016.

Two-thirds of all data center traffic and server workloads will be cloud-based by 2016, Cisco predicts, and the average workload per cloud server will be 4 times greater than that of traditional servers. Consumer cloud traffic is expected to grow faster than business cloud traffic, at 46 percent CAGR vs 37 percent for business. The Global Cloud Index report seeks to expand upon existing network traffic studies to assess the likely impact of Internet growth on data center and cloud infrastructure.

"This year’s forecast confirms that strong growth in data center usage and cloud traffic are global trends, driven by our growing desire to access personal and business content anywhere, on any device," said Douglas Merritt, Senior Vice President, Corporate Marketing for Cisco. "It is clear that the next-generation Internet will be an essential component to enabling much greater data center virtualization and a new world of interconnected clouds.”

The greatest impact of this traffic growth will be felt in the data center, where traffic is 8-fold larger than the traffic to end-users. To help illustrate the difference (and to get a plug in for one of its popular products) Cisco also gave an example of a WebEx meeting with camera, desktop sharing, VoIP and Recording, which showed that traffic in the data center is 2 times greater than end user traffic for this process.

How Much is a Zettabyte of Data?

Zettabytes are hard to wrap your head around, so Cisco provided a few examples of what 6.6 of them is equivalent to:

The vast majority of data center traffic is not caused by end users, but for cloud computing workloads used in activities virtually invisible to individuals. Cisco forecasts that roughly 76% of data center traffic will stay within the data center, largely generated by storage, production, and development data. An estimated 7 percent will be used for data replication and software/system updates, leaving the remaining 17 percent for end users accessing clouds for web surfing, emailing and video streaming.

The company predicts the highest growth rates through 2016 will be in the Middle East and Africa. AsiaPac will exceed North America as the largest market for cloud traffic by 2016. Here's a look at the projections for regional cloud traffic growth breakdown:

The report also outlined the network requirements of consumer and business apps. Usage of hosted apps has been growing exponentially, and the report suggest application traffic will increase 42-fold from 2011-2016, at a 111% CAGR. For more advanced cloud apps, latency will need to be less than 100 milliseconds with much higher download and upload speeds (2,500+ kbps download and 1,000+ kbps upload, versus 750+ and 250+ of the lowest tier, basic cloud apps)

In terms of end-user cloud readiness, South Korea and Hong Kong lead the pack when taking broadband speeds and latency into consideration.  North America and Western Europe lead in terms of regional broadband ubiquity for mobile and fixed broadband penetration. The report also looks at Regional Mobile and Fixed device ownership and M2M connections by country. Central and Eastern Europe will have the highest growth in mobile broadband penetration.