Google Brings You Inside Its Mighty Data Centers

Google has provided the most comprehensive look yet inside its mighty Internet infrastructure, releasing a portfolio of images of its data centers that reveal the technology powering its online information empire.

Google has provided the most comprehensive look yet inside its mighty Internet infrastructure, releasing a portfolio of images of its data centers that reveal the technology powering its online information empire. The gallery titled Where the Internet Lives features images from Connie Zhou, who specializes in architecture photography, and showcases the beauty and complexity of the facilities that power the Internet.

"While we’ve shared many of our designs and best practices, and we’ve been publishing our efficiency data since 2008, only a small set of employees have access to the server floor itself," writes Urs Hölzle, Senior Vice President, Technical Infrastructure, on the Google Blog. "Today, for the first time, you can see inside our data centers and pay them a virtual visit."

Indeed, Google has used the StreetView component of its GoogleMaps app to provide a virtual tour of its data center in Lenoir, North Carolina. The tour reveals that the facility isn't guarded by a moat filled with sharks with friggin' laser beams on their head, but by Imperial Storm Troopers. 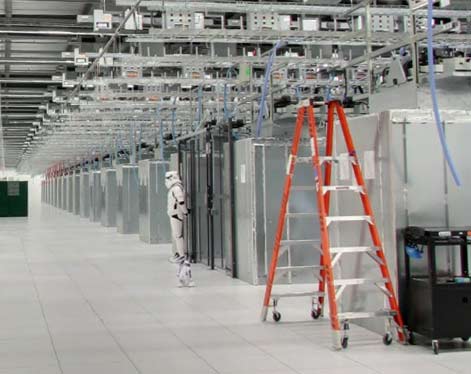 Google has at least one Imperial Storm Trooper keeping an eye on the racks inside its data center in Lenoir, North Carolina. (Image: Google)

While Google is having some fun with its virtual tour, the company's decision to open its data centers goes beyond the "cool factor" of rows of blinking lights on servers and the scale of its operations. The photos and tour provide new insights into the company's technology and data center design (we'll have more on this later this morning on DCK) that may prove valuable to the data center industry. Joe Kava, Senior Director of Data Centers at Google, says the data center team will be providing a deeper dive into some of its innovations in a series of future blog posts.

"We've been sharing a lot of information and best practices for a long time," said Kava. "But we get hundreds and thousands of requests to visit our data centers. We can't accommodate these because our primary concern is the privacy and security of our users' data. Since we can't bring the public to our data centers, we thought we'd bring our data centers to the public."

Here's a video that provides an overview of the StreetView tour.