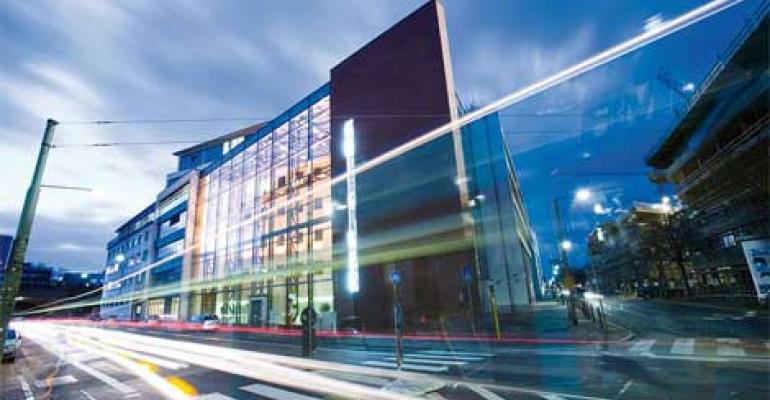 Equinix is the new owner of a major data center at Kleyer90 connectivity hub in Frankffurt, pictured above. Equinix said today that it has agreed to acquire ancotel GmbH. (Photo: ancotel)netw
Design>Networks

How much data is flowing through the Internet's largest pipes?The DE-CIX Internet exchange in Frankfurt, Germany, which reported last week that it has reached a new data throughput record of 2 terabits per second. 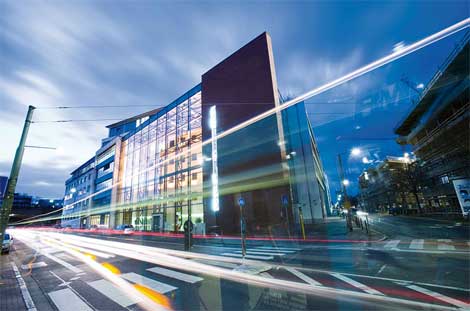 The Equinix/ancotel facility at Kleyer90 is one of 12 data centers in the Frankfurt area that collectively host the DE-CIX Internet exchange point. (Photo: ancotel)

How much data is flowing through the Internet's largest pipes? One of the network's major intersections is the DE-CIX Internet exchange in Frankfurt, Germany, which reported last week that it has reached a  new data throughput record of 2 terabits per second.

More than 480 Internet service providers from over 50 countries are currently connected to DE-CIX, where each day they exchange more than 12 petabyte of data - a volume corresponding to 2.7 million DVDs. Exchange officials said the main drivers behind the continuing increase in data traffic include HD-TV, video and multimedia content, online gaming and cloud computing.

“Although the traffic peak of over 2 Tbit/s marks a new high,we do not see an end to data traffic growth on the horizon," said Harald Summa, CEO at DE-CIX Management GmbH. "We assume that Internet traffic will continue to grow by about 80 per cent per year in the future.”

Distributed Across a Dozen Sites

The DE-CIX peering infrastructure has a star-shaped topology and is spread out over a total of 12 data centers operated by different providers in the Frankfurt area. The center of the DE-CIX peering star is composed of two redundant core switch clusters, one active and the other in hot standby mode. The central core switch clusters are redundantly connected to 14 other switches which are in turn connected to the ISPs.

"DE-CIX’s technical infrastructure is an extremely efficient and failsafe platform for exchanging Internet traffic with a maximum data throughput capacity of up to 40 Tbit/s," said Arnold Nipper, Technical Manager at DE-CIX, who said he's not worried about the forecasts predicting high data growth rates. "We of course continue to refine the platform to meet future demands."

Founded in 1995, DE-CIX is the primary Internet exchange for Central and Eastern Europe, and says it is the largest Internet exchange worldwide for data throughput. You can view its traffic statistics on its web site.