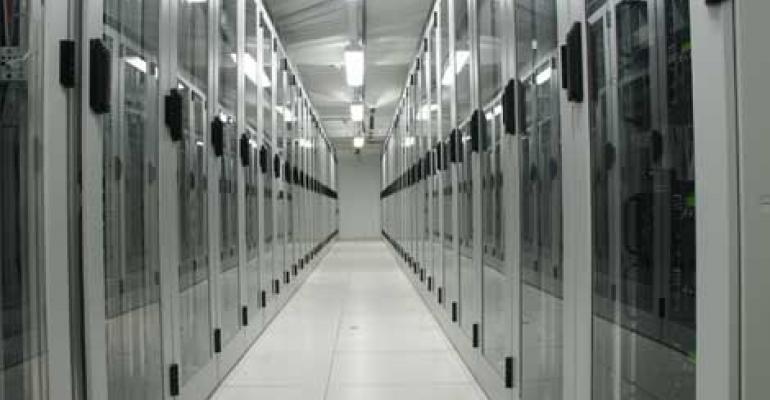 A look inside one of the data centers operated by 1&#038;1 Internet, which has just announced a cloud computing offering.
Colocation

Not all media companies are struggling with the transition to the Internet. The Missouri-based News-Press &amp; Gazette Company, which operates a chain of newspapers and TV stations, said today that it will invest $20 million in Online Tech, a data center service provider that will use the money to build new facilities and expand beyond its core markets in Michigan.

Most news organizations are adapting to the Internet by beefing up their web sites and diving into social media.  The News-Press & Gazette Company (NPG) is taking a different path - it's building and buying data centers.

The Missouri-based News-Press, which operates a chain of newspapers and TV stations, said today that it will invest $20 million in Online Tech, a data center service provider that will use the money to build new facilities and expand beyond its core markets in Michigan. While many media companies have extensive data center operations to house their servers ad storage gear, the News-Press is taking its digital focus to the next level, as an investor betting on the growing need for specialized IT services in smaller regional markets.

NPG is a 100-year old family-owned company that runs 40 television stations and 14 daily and weekly newspapers out of St. Joseph, Missouri. That makes it an unusual player in the world of data center investing, a capital-intensive business which is dominated by private equity firms and large publicly-held companies with billions of dollars in assets.

But when NPG sold its cable television assets last year, it began sizing up new business opportunities, and identified the data center business as one of the fastest-growing sectors of the economy. The company started by investing $2 million to build a pair of data centers in St. Joseph earlier this year, and then began seeking companies with experience in the data center business.

In Online Tech, NPG has found a partner that shares its focus on secondary markets, and has built a niche hosting health care and financial customers requiring specialized support to comply with regulations for handling sensitive customer data. Online Tech provides colocation and cloud hosting for many customers who need to meet the HIPAA guidelines for managing patient health data or the PCI standard for credit card information. Online Tech currently operates three data centers in Ann Arbor and Flint, which house 60,000 square feet of raised-floor data center space for customer servers. The company  plans to use the $20 million investment from NPG to add four more data centers to the company’s portfolio over the next 24 months.

"Online Tech has built the leading data center operating company in Michigan," said CEO Yan Ness. "This investment provides us the capital we need to expand our data center business into additional markets across the Midwest."

“We chose to partner with NPG from a number of investor groups we spoke with because of the cultural fit between the organizations,” said Mike Klein, President and COO of Online Tech, who is familiar to many Data Center Knowledge readers for his Industry Perspectives columns on health care and disaster recovery. “The shared Midwest values, focus on customers and employees, and alignment around our win-win approach to business made NPG a great fit as a capital partner.”

Data center development has historically focused on large Internet markets like Silicon Valley, northern Virginia and the greater New York market. Analysts see an emerging  business opportunity in smaller cities, where many businesses host their IT equipment in company offices or server rooms. A number of new companies are targeting this opportunity, including Compass Datacenters, 365 Main and ByteGrid.

NPG is among a number of new players in the data center market, which for years was dominated by companies founded in the early years of the Internet boom. Data centers are expensive to build, creating a high barrier to entry by new companies. Investors in the sector, including private equity firms, have traditionally backed companies with a track record in the industry. As a new investor with an industry partner and a strategic focus, NPG is likely to be among the closely-watched market entrants.