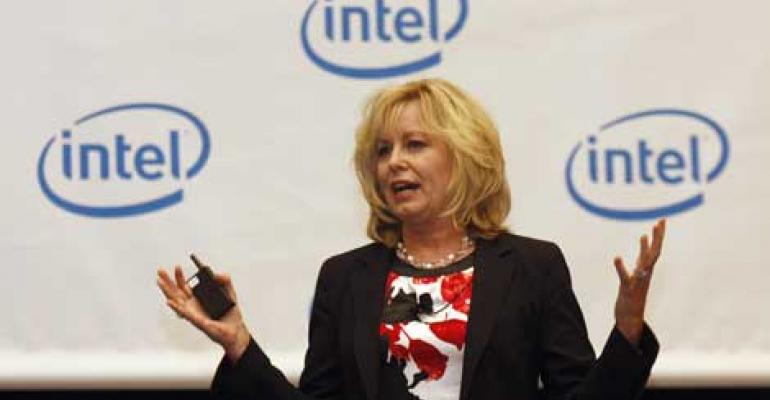 At the 2012 Intel Developer Forum (IDF) , Intel introduced a reference platform for open, simplified networking comprised of a SeaCliff Trail Reference Board, a top of rack switch with a series of ASICs created through Fulcrum Microsystems.

Intel demonstrated its solution for software defined networking (SDN) at the 2012 Intel Developer Forum (IDF) in San Francisco this week. Intel's Diane Bryant, corporate VP and GM of Intel’s Data Center and Connected Systems Group, outlined a platform that will include both a hardware switch and software that supports the OpenFlow protocol..

The announcement of Intel's reference platform for open, simplified networking is comprised of a  SeaCliff Trail Reference Board, a top of rack switch with a series of ASICs created through Fulcrum Microsystems, which Intel acquired last year. To drive the real-time operating system for the platform Intel adds technology from another acquisition, WindRiver, and a SDN software framework based on Linux.

To fully explore the bounds of SDN and OpenFlow as it relates to the SeaCliff platform, Intel is a part of the joint initiative of Open Networking Research Center.

Another new component and enabler of the cloud strategy is Intel Cloud Finder. As a service to match enterprises with Cloud Infrastructure Providers, it allows an end user to compare and contrast providers based on security, usability, quality, availability, technology and its business. Some of the early participants on the sell side of the equation include Rackspace, QTS, Savvis, GoGrid, Joyent, Soft Layer and Virtustream.

During Bryant's talk at IDF the chair of ODCA, Mario Mueller described how membership is steadily growing, and how the alliance creates unified customer requirements through usage models, collaborates with standards organizations commits to a roadmap to guide internal IT deployments. ODCA attributes are listed in the Intel CloudFinder site.

The 2012 Intel Developer Forum conversation can be found on Twitter at #IDF2012.