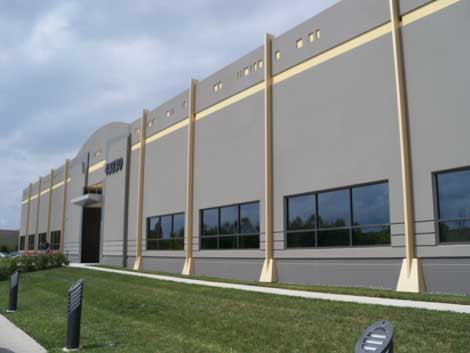 This is the newest of the five data center buildings at Digital Realty's fast-growing Loudoun Exchange campus in Ashburn, Va. (Photo: Rich Miller).

ASHBURN, Va. - While growth is stagnant in many sectors U.S. economy, the Internet continues to grow. And that's good business for the places where the Internet lives, like Loudoun County, Virginia.

This region of northern Virginia is perhaps the most connected piece of Internet real estate in the United States, housing servers for Facebook, Amazon, Rackspace, Google, Microsoft and hundreds of other companies. That's why the town of Ashburn is home to a data center building boom, with active projects under development by many of the nation's largest data center developers.

There is nearly 5 million square feet of data center space in about 40 facilities in this "Data Center Alley," according to Buddy Rizer, Assistant Director for Economic Development in Loudoun County.  "This industry has helped drive one of America's great economic development success stories. The tax benefits to Loudoun County have been incredible. We are very focused now on continuing to grow the data center cluster."

Rizer says there is another 2 million square feet of data center space in the pipeline. Those growth projections are affirmed by Dominion Virginia Power, which is  among the first responders to data center companies seeking sites.

"We are seeing an amazing number of inquiries (from data center developers) regarding power," said Philip Sandino, the Director of Customer Solutions for Dominion Virginia Power. "The growth in this area right now is unique."

That growth was the focus of "Data Centers Loudoun: The Next Revolution," a forum hosted this week by the Loudoun Chamber of Commerce, which examined the economic impact of the data center industry. Many of the 150 attendees were connected with colocation and data center companies, which have noted the support of local officials in streamlining expansions and new construction.

"We have locations throughout the United States, but Loudoun is probably the one that understands the data center market the most," said Pete Stevenson, CEO of Latisys, which has experienced solid growth in Ashburn since arriving in 2010.

"When you come to Loudon County to build a data center, you can get to market faster and there are no surprises," said Rizer, who spends much of his time focused on the data center industry. Dominion Virginia Power is also actively engaged with the sector, having created a Data Center Services unit to work with site selection prospects.

Here's a look at some of the projects and companies on the roadmap in Loudoun County:

"Our research shows that demand will continue to outpace supply for at least the next three years," said Rizer. "We think Loudoun County still has a lot of room to grow in the data center sector. We think we can get to 10 million square feet of data center space over the next five years."

Some of the market's largest developers agree. "In Northern Virginia, we are tracking over 40 megawatts of potential demand, up from 37.7 in the previous quarter," said Michael Foust, CEO of Digital Realty, in the company's latest earnings call. "This compares to approximately 27 megawatts available supply that’s either built-out or currently under construction."

Real estate sources agree that there's plenty of demand in the pipeline, but say that the increased inventory still has potential impact. “There are three 5 to 7 megawatt deals currently under consideration in the Northern Virginia market,” wrote Jim Kerrigan at Avison Young in a recent market analysis.

At the same time, there's also a larger number of competitors with available space competing for those deals. Kerrigan says there are seven facilities in the Virginia market that can offer at least 1 megawatt of critical power capacity, which has affected some deal terms. “Excess inventory has led to an increase in concessions,” he said.”The result has been a reduction in pricing of 15%, with pricing expected to remain stagnant for the next 12 to 18 months.” A similar phenomenon was seen last year in Santa Clara following a burst of new development.

But big leases from major players can devour space and alter market dynamics in a hurry. An example: DuPont Fabros signed leases for 18 megawatts of space in its ACC6 data center in the second quarter of 2012.

"I think the supply and demnand equation is working itself out," said Jim Leach, at RagingWire, who sees a vibrant future for the data center industry in Northern Virginia.

"I think we really need to look at Loudoun County as the Silicon Valley of the data center industry," said Leach. "We're not there yet. If we continue with the momentum we have, I think we can establish this community as one of the great data center communities in the world."

Rizer said Loudoun's economic development team is seeking to build on the success of the Ashburn data center cluster, using the region's connectivity and easy access to cloud builders as a hook to attract other technology companies, including developers of web apps and mobile technology. Plans to extend the Washington D.C. Metro rail line to Ashburn will only make the region more attractive to businesses, he said.

"Loudoun County remains one of the strongest data center markets in the country, and we expect this to continue for some time to come," said Rizer.