Is Apple Going Modular at its North Carolina iDataCenter?

It looks like the next phase of Apple's North Carolina data center will feature small modular data centers that can deploy compute capacity in small increments. The new design represents a major change from the first phase of Apple's iDataCenter campus, a 500,000 square foot building that is one of the largest structures in the data center industry. 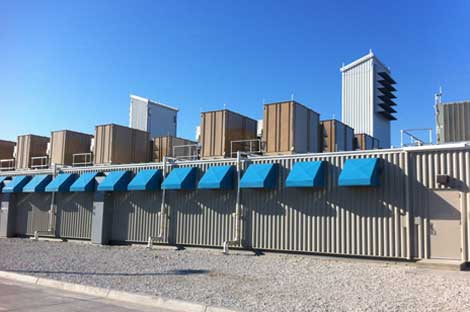 Is this what the next phase of Apple's North Carolina data center might look like? Apple is using modular data centers from NxGen (shown above) in its new Oregon data center. Now the company is deploying a smaller "tactical MDC" facility at its North Carolina campus. (Photo: NxGen)

It looks like the next phase of Apple's mighty iDataCenter in North Carolina may feature small modular data centers that can deploy server capacity in increments. That would represent a shift from the first phase of the project, a 500,000 square foot building that is one of the largest structures in the data center industry.

Apple has filed plans with Catawaba County to construct a 21,000 square foot "tactical MDC" on a concrete pad at the company's campus in Maiden, N.C. The permits included few details about the facility design, but "MDC" is frequently used as an acronym for "modular data center."

Permits refer to the expansion as an equipment building that will house clusters of servers, according to the Hickory Daily Record. Local officials say the facility will be a stand-alone metal building, with a fence and "man trap" access corridor for security.

That's a change from the current data center building, which features a large fixed structure built like a fortress. Modular data centers feature pre-fabricated components that are built in factories and then assembled at customer sites. This approach allows IT capacity to be deployed quickly and in bite-sized chunks. This approach has proven attractive to companies like Microsoft, Google and eBay that are building large-scale data centers to support their cloud computing operations.

The building permits for the new Apple tactical MDC don't name a particular provider. But Apple is currently deploying modular data centers from NxGen Modular at its new data center in Prineville, Oregon. NxGen has developed next-generation modular designs, with pre-fabricated components that can be assembled into a complete data center, complete with power, cooling and mechanical rooms.

The 500,000 square foot iDataCenter in Maiden is providing support for Apple’s new iCloud service, which stores and synchronizes music, photos and data across multiple devices. The current building features a one-story data center floor spanning about 180,000 feet of space, enclosed by more than 262,000 square feet of space supporting mechanical and electrical systems to support power and cooling, and about 60,000 square feet of office space.

What Does "Tactical" Mean

Will Apple deploy more of these smaller data centers?  Or will this "tactical" facility be used in a more strategic fashion? The report in the Hickory Record raises the possibility that the expansion may tie into Apple's plans for a second 500,000 square foot data center at the Maiden site. The paper notes that the site plan for the Apple campus shows the new facility "t-boned to the 500,000-square-foot existing data center. The plans still show the footprint for a larger data center that would run nearly parallel to the existing one and would t-bone the smaller one currently under construction."

That suggests that the smaller modular facility can add temporary capacity, but might also serve as a connector between two large facilities. We've reached out to Apple for comment, but have not heard back yet. We'll update if we do.