The June 2012 Top500 supercomputer list and now the Green500 list have been published, so it’s about time to update the latest Exascalar analysis, which is a methodology to synthesize the information in both the Top500 Performance ranking and the Green500 Efficiency ranking of supercomputers. Winston Saunders of Intel provides insight into what the analysis means.

The June 2012 Top500 and now the Green500 have been published, so it’s about time to update the latest Exascalar analysis.

Exascalar is a way to synthesize the information in both the Top500 Performance ranking and the Green500 Efficiency ranking of supercomputers into one graph oriented toward Exascale computing goals. The Exascalar graph emphasizes the primary dependency of performance leadership on efficiency leadership.

You will recall that it is simply the logarithmic distance of a particular computer in both performance and efficiency from the Exascalar goal of 10^18flops in a 20 MegaWatt envelope. An Exascalar of -2 is a factor of 100 away from the Exascale goal.

The chart below displays the Exascalar anlaysis of the Green500 list that was just published. 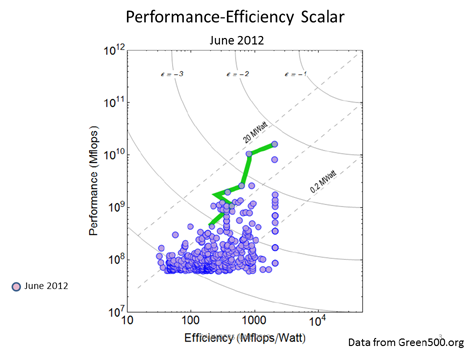 There are several comments that can be made about the graph. The first is characteristic “triangular” shape of the collected data points. This is due to the limitations power places on performance and a cut-off line in performance.This is the first time I've see what may be a cut-off in efficiency, but I will need to confirm that.

You can also see the dominant BlueGene/Q systems, which occupied roughly the top20 slots of the Green500 list and for the first time also led the Top500. These are the “column” of dots on the right side of the graph.

The green line in the graph is the “top Exascalar” system over the last five years. Over the period, Exascalar has increased a factor of 100 (from -4 to -2). Most of this gain has been in efficiency. In the future, I expect almost all gains will be in efficiency (hence the structure of Exascalar graph). 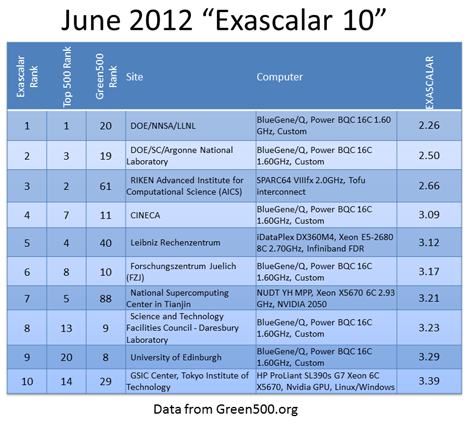 The list of the top Exascalar systems show how the ranking stacks up with both the Performance and Efficiency rankings of the Top500 and Green500, respectively. The efficiency rankings of the BlueGene systems is a bit deceptive since all top 20 Green500 systems were BlueGene with the same (very high) efficiency. Overall BlueGene takes six of the top ten spots. The SPARC64 system, formerly the top system, declined to number 3. There are three Xeon based systems in the top ten.

Last fall, the Top10 Supercomputers didn’t change at all but on the Green500 list there was quite a bit of action. This time of course the BlueGene/Q systems dominated both the Top500 and Green500.

In my next blog, I’ll discuss the evolution of Exascalar since the last publication.