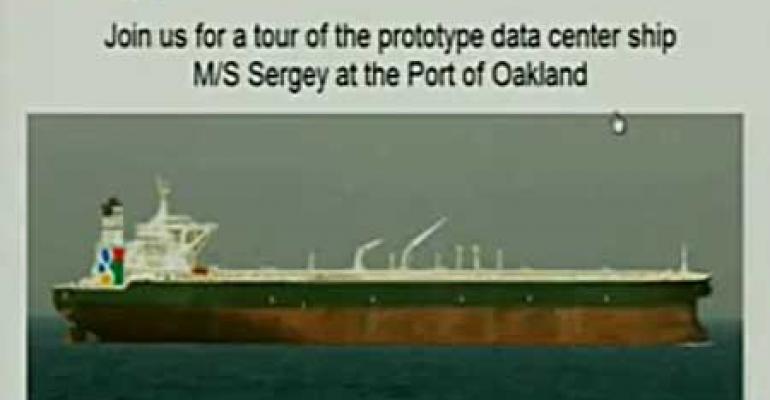 Still No Sign of Data Ships on the Horizon

Over the years we've highlighted a number of unusual approaches to data center design. Some of these offbeat strategies have developed into real-world technology. But floating data centers are not among them, and there’s no sign that will change anytime soon. 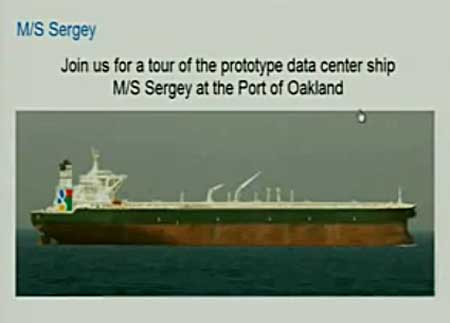 As a practical joke, Google displayed a Photoshopped image of a "prototype data center ship" as part of its Data Center Efficiency Summit in 2009.

Whatever happened to floating data centers? Over the years we've highlighted a number of unusual approaches to data center design. Some of these offbeat strategies have developed into real-world technology. But floating data centers are not among them, and there’s no sign that will change anytime soon.

We've written several times about proposals for water-based data centers. The concept isn't new, as Naval vessels and cruise ships have operated IT and communications facilities for years. The notion of a commercial hosting and colo service was first floated in 2008, when a Bay Area startup announced plans to build data centers on cargo container ships.

In January 2008, IDS (International Data Security) revealed plans to build up to 50 data centers on de-commissioned cargo ships. The IDS leadership team included Richard Naughton, a former Navy admiral and superintendent of the Naval Academy, and Ken Choi, who ran a company specializing in RFID technology. IDS described plans to develop the below-deck areas of the ships as data center space, and use deck space to house containers packed with servers.

The company was quiet for two years, but emerged in August 2010 to say it had lined up funding and an anchor tenant for a proof-of-concept “maritime data center” to be housed at a dock at Redwood City, Calif. The first vessel was to be a former training ship for the California Maritime Academy that an IDS affiliate acquired and was prepping for renovation. IDS representatives said the company had lined up $15 million for an initial deployment of 500 racks of servers.

But Naughton passed away in February, 2011, and the vessel intended to become the first "dataship" became the focus of legal proceedings, and was eventually sold in a court-ordered auction. The new owner scheduled it for recycling. International Maritime Security Alliance, the company operated by Naughton and Choi that owned the vessel, filed for bankruptcy in Nov. 2011.

IDS wasn’t the only company to explore ocean-going data centers. In 2008 Google filed a patent for a “water-based data center” that would use the ocean to provide power and cooling. The patent application, which was filed in Feb. 2007, suggested that Google’s cogitations about floating data centers likely predated the plans by IDS.

The patent described "crane-removable modules" to power the computing platforms. The floating data centers would be located 3 to 7 miles from shore, in 50 to 70 meters of water. The Google design incoporated the Pelamis Wave Energy Converter units, which use the motion of ocean surface waves to create electricity and can be combined to form "wave farms." Diagrams included with Google’s patent application indicated the company might combine 40 or more Pelamis units to produce 40 megawatts of power.

Google is known for secrecy about its data center operations. But there’s no evidence that Google has ever attempted to deploy such a facility, and it's not clear whether the company took the concept seriously.