Q&A: Andrew Blum on the 'Tubes' Powering the Internet

What does the center of the Internet look like? That's the focus of Andrew Blum's new book: Tubes: A Journey to the Center of the Internet, to be published May 29. We recently did a Q-and-A with Blum about his interest in Internet infrastructure and the process of researching and writing the book. 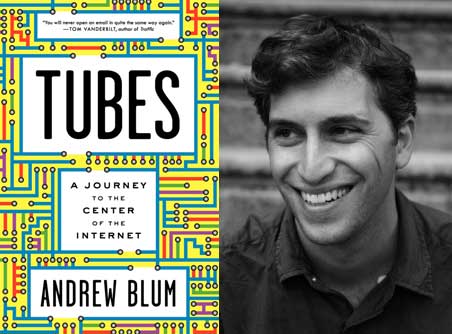 Authot Andrew Blum, right, and the cover of "Tubes," his new book about Internet infrastructure.

What does the center of the Internet look like? Journalist Andrew Blum has spent the past three years exploring that question. The result is Blum's new book:  Tubes: A Journey to the Center of the Internet, which is being released today by Ecco, an imprint of HarperCollins. Blum has previously written about architecture, design and technology for publications including Wired, The New York Times and The New Yorker.

The dust jacket for the book describes the Internet’s physical infrastructure as "a shockingly tactile realm of unmarked compounds, populated by a special caste of engineer who pieces together our networks by hand; where glass fibers pulse with light and creaky telegraph buildings, tortuously rewired, become communication hubs once again."

Sound familiar? It's the world we track here every day at Data Center Knowledge. Journalists' forays into this world aren't always successful. The good news: With Tubes, Blum has put together an engaging book that takes readers on an intelligent and informed journey inside the key places that tie the Internet together. He explores sites like PAIX in Palo Alto, the Equinix hub in Ashburn, 111 8th Avenue in New York, and key Internet exchanges in Amsterdam and Frankfurt. Blum has taken the time to understand Internet infrastructure and get to know many of the key people who built and maintain the network.

We recently did a Q-and-A with Andrew Blum about his interest in Internet infrastructure and the process of researching and writing Tubes.

Andrew Blum: I'd always been curious about what the Internet was really made of, but the topic seemed off-limits. Data centers were legendarily top secret--the famous "fight club" mentality--and undersea cables were like something out a spy movie. But two things happened in 2009 that changed my view: the US government announced the "BTOP" program, to provide economic stimulus funding for the construction of new broadband networks. And a squirrel chewed through my cable connection at home. Both events (while unrelated) made me realize the Internet wasn't a monolithic whole. It had parts and pieces, owned by a whole slew of operators--some of whom were happy to show me around. It was a like a hidden door had cracked open. I went inside.

DCK: In “Tubes,” you write that the Internet has “a seemingly infinite number of edges, but a shockingly small number of centers.” What surprised you about the geography of the Internet?

Blum: I did not expect the Internet to be as concentrated as it is. The Internet is of course, in some form, nearly everywhere. But there's no doubt as to the importance of the AAA real estate--like a cage at 60 Hudson in New York, or a plot of vacant land in Ashburn, Virginia. And actually Ashburn is the one that really gets me. Almost all of the Internet's most important places are world capitals in their own right: New York, London, Frankfurt, Tokyo, Los Angeles. But Ashburn is the outlier--a place that seems to have been made by the Internet itself, rather than built on the backs of the old geography. I always liked how infrastructure guys talk about "Ashburn" as if it were London or New York, not an unincorporated suburb!

DCK: You take readers inside some of the Internet’s most critical connectivity hubs, but in other cases – most notably at Google’s complex at The Dalles – you never really get past the PR perimeter. How hard was it to gain access to the sites that most intrigued you?

Blum: Certainly some places were easier to access than others. The major hubs weren't very difficult, because they are so competitive with each other-- Equinix with Telx, Coresite with Telehouse, etc. They were all happy for the publicity, and knew they needed to tell the story of why they were different. And I was eager to hear it. The undersea cable world was trickier. I really wanted to visit a cable landing station, but they're typically secreted away, and don't often welcome visitors. But as I learned more, I think they trusted that I would paint an accurate picture of what goes on inside. It took two years, but in the end, several companies opened their doors: Global Crossing (now Level 3), Tata, and Hibernia Atlantic.

DCK: What was the most interesting place/facility you visited, and why?

Blum: That's a tough question! Telehouse in London is a fascinating place; it seems to have a culture and history all its own, and it's impossible to overstate its importance to global telecommunications. But I love the ocean, so I'm partial to the undersea cable landing stations. Porthcurno, in England, has had a continuous one-hundred-and-fifty year history as a place where undersea cables land--and it remains a key thoroughfare for trans-Atlantic connections. That's hard to beat.

Blum: We're so accustomed to the Internet being a global network that we completely ignore how all these bit of data traverse actual oceans, traveling as pulses of light through actual tubes. The physicality of it all is inescapable. When I got to touch a sample of cable--as thin as a garden hose--that began to seem possible to grasp. But then I remembered the other dimension: this two-inch thick little thing was thousands of miles long! And then I felt pretty small. It's a big world. And the Internet doesn't change that.