This week GI Partners and CalPERS, whose initial foray into the sector was enormously successful, announced that they would team on a new fund to invest in data center real estate. But the new fund will differ from their first collaboration in significant ways, which reflect how the industry has matured over the past decade. 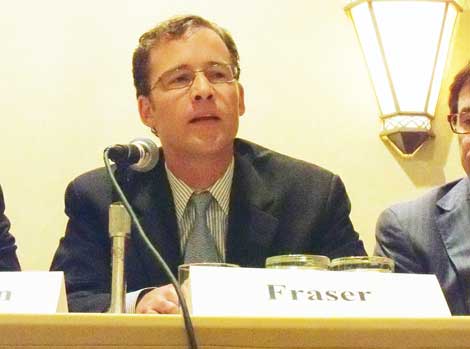 Alexander Fraser, Managing Director of GI Partners, speaks at a panel Wednesday at the IMN conference on data center investing in New York. GI Partners has teamed with CalPERS on a new fund to invest in the data center sector. (Photo: Rich Miller)

One of the key developments in the history of the data center industry occurred in 2001, when private equity firm GI Partners teamed with the California Public Employees' Retirement System (CalPERS) to acquire dozens of data center and Internet gateway properties. The portfolio formed the nucleus of Digital Realty, the real estate investment trust that has become the leading player in the global market for mission-critical facilities.

This week GI Partners and CalPERS announced that they would again team on a fund to invest in data center real estate. But the new fund will differ from their first collaboration in significant ways, which reflect how the industry has matured in the past decade. That change was the focus of a panel discussion Wednesday at the IMN Forum on Financing, Investing and Real Estate Development for Data Centers, held at the Downtown Marriott in New York.

"It's certainly a different environment now than it was 10 years ago," said Alexander Fraser, Managing Director of GI Partners. "Ten years ago, people had a vision and a thesis. Now there's 10 years of data and proven fundamentals. We've seen a pronounced maturation of the ecosystems around the data center sector."

The new TechCore LLC will be a $500 million core real estate fund that will purchase data centers, internet gateways, corporate technology campuses and life science properties. In real estate, a "core" investment is a stable property with high occupancy rates and steady income from tenants with strong credit, which can generate a solid return without significant development or expansion. TechCore will focus on acquiring highly-leased single tenant data centers.

That marks a shift from GI Partners' entry into the data center sector in 2001. At the time, the data center industry was entering a prolonged slump amid an oversupply of space. When the Internet market crashed, companies who had overbuilt wound up in bankruptcy, leaving data centers sitting empty, to be sold for pennies on the dollar.

GI Partners acquired dozens of these properties, gradually filling them with tenants and redeveloping any unfinished space. The effort helped CALPERS realize a 31 percent net annualized internal rate of return on its investment. The fund recently said that it made $695 million on its investment in GI Partners Fund I.

Maturing as an Asset Class

In the past decade, data centers have grown into a new asset class, to the point where the new TechCORE fund can focus on stable income properties rather than speculative turnarounds.

“This partnership represents the next generation of innovative investments to come in core real estate that is wired and ready to support the technology,” said Joe Dear, CalPERS' Chief Investment Officer. CalPERS has assets of approximately $235 billion, is the largest public pension fund in the U.S. It administers retirement benefits for more than 1.6 million California state, local government, and public school employees.

With the launch of TechCore, we will likely see more deals in which stand-alone enterprise data centers are acquired, primarily through sale-leaseback deals. A sale-leaseback option typically involves a property owner selling its building to a second party, while agreeing to continue to lease space in the building. The transaction generates cash for the former owner (now the tenant), and provides the new owner steady rent from the lease.

Ironically, TechCore may find itself competing on these deals with Digital Realty, which has increasingly been focusing on the opportunity to acquire stable, income-producing data centers.

The emergence of data centers as an asset class with a history of performance has made it easier to find capital for mission-critical facilities. This has also led to a larger pool of potential buyers and investors for data center assets.

"When we started doing this, a lot of what we were doing was evangelizing the sector to the banking industry," said Marty Friedman, Partner and Managing Director of DH Capital. "Clearly, the private equity world has discovered this business in a significant way. Many of them are kicking themselves for not having discovered it three years ago. "

Unfortunately? While the availability of credit and private equity investment has allowed many current operators to expand their infrastructure, it also makes it easier for new players to enter the data center industry, which has historically had high barriers to entry due to the large technical and capital requirements.

For existing players and investors, this influx of capital and new companies raises concerns about supply and demand - the possibility that new inventory of data center space could disrupt pricing and the competitive dynamic in key markets.

"It's still an investable business," said Ferry. "But the returns have been rationalized down because more investors are looking at the space. But it's interesting that the early investors - the Seaports, ABRYs and GI Partners - are still investing in this sector."