The disruptions in the server ecosystem were on display at last week's Open Compute Summit in the rising profile of original design manufacturing (ODM) providers and other alternatives to OEMs like Dell, HP and IBM that have dominated server sales in the U.S. 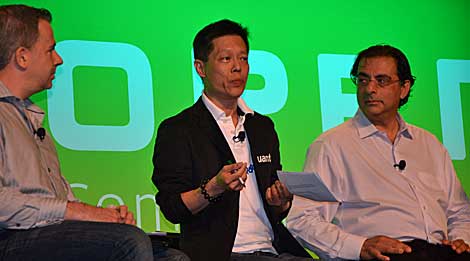 SAN ANTONIO - There is meaningful change occurring  in how servers are designed, built and sold. The disruptions in the server ecosystem were on display at last week's Open Compute Summit in the rising profile of original design manufacturing (ODM) providers and other alternatives to working with original equipment manufacturers (OEMs) like Dell, HP and IBM that have dominated server sales in the U.S.

"We've got a whole series of folks willing to work with companies in a joint development effort," said Frank Frankovsky,  VP of Hardware Design and Supply Chain for Facebook, which founded the Open Compute Project (OCP) last year.

Quanta's new QCT initiative will provide off-the-shelf designs based on Open Compute, along with configuration and support services. QCT hopes to extend Quanta's business beyond the web-scale companies that have been its primary U.S. customers.

"For the first time, customers can take advantage of Quanta's outstanding engineering and integrated data center solutions in an OCP rack, even if they're not large enough to require a full-service original design manufacturer," said Mike Yang, general manager and vice president of QCT.

"Meeting with customers over the past year has been amazing," said Ichinaga. "We originally thought that interest for OCP would come from a small number of Web 2.0 companies. However, the conversations with customers have shown us that a broad range of industry segments - such as telecom, banking, Cloud, national labs, universities, manufacturing and pharmaceuticals - want these types of lower cost and highly efficient IT solutions."

ZT Systems: 'The Market is Moving Toward Us'

ZT Systems, which made custom desktops for years before entering the custom server market in 2006, says the growth of Open Compute reflects larger trends which are boosting interest in custom designs.

"It really feels like the market is moving towards valuing the strengths ZT brings to the process," said Brent Miller, VP of enterprise sales for ZT Systems. "Our formula for success is around collaboration with customers and combining that with our expertise. The fact that Open Compute is being driven by customers is phenomenal. There's no voodoo happening inside the box. Where the value comes is how you put the box together. We don't design a shiny object to attract people to the shininess."

The incumbent OEMs aren't sitting on their laurels. Dell and HP have stepped up their involvement in the Open Compute project, and at last week's summit both companies showed off servers designed for the new Open Rack standard.

"Hyper scale is the principal driver of growth for the industry for the foreseeable future," said Forrest Norrod, the VP and GM for Server Platforms at Dell. "At a certain point, this model will become more prevalent."

"We see promise (for open Compute)," said Glenn Keels, Director of Marketing for HP's Hyperscale business. "We need to participate in it."